Blooming plants are a bit late this season, though they are not bound by time schedules as most of us. Many early bloomers will range a couple weeks earlier or later through the years, and the cool, cloudy weather has pushed them later this year. If it warms up over the next week we’ll see some the flowering times of plants overlap that are usually weeks apart. Last year a cool late March delayed Redbuds blooming so that they began just a few days before the native Dogwoods, when the normal cycle is a couple weeks earlier. 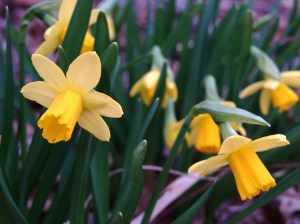 My early daffodils are late, February Gold is just starting to show color. And the Royal Star magnolia, which will flower from time to time in late February, is just breaking bud. The Jane magnolia (below) will bloom at just about the same time in my garden this year, and it should be a week or more later.

I was visiting south of Fredericksburg, Virginia last week , and there was a notable difference. Flowering pears were popping into bloom, while thirty miles north the buds were just beginning to swell. I’m sure that inside the Beltway trees are in full bloom. Just a few degrees warmer will do that.

I suppose the official grand opening of Spring is announced with forsythia flowering. I have but one odd sort, ‘Kumson’ with contrasting veins on the leaves. I do not grow the common forsythia, not due to any snobbery, but because it is difficult to keep in bounds.

Though my garden is fairly large I have little space for plants that need continuous pruning to keep a semblance of form. Variegated pussy willow is my lone concession to allowing a plant that is nearly impossible to control, and only because it is one of few that could tolerate living in a bog. My poor ‘Kumson’ forsythia struggles for its place in the garden and clearly does not share the vigor of the common form.

Though forsythia is a traditional harbinger of Spring, my first acquisition of the year is a shrub that blooms several weeks earlier and is a virtual unknown. The fragrant blooms of Edgeworthia are exceptionally beautiful. It is purported not to be quite hardy enough for my garden, but I’ll give it a protected area. Gardeners usually covet plants that aren’t hardy enough for them, and to have any chance for survival they must be planted in the Spring so that a vigorous root system can be established prior to Winters’ cold.

Every year some plants will disappoint and others will be so delightful that you wonder why you hadn’t noticed their beauty in past years. One tragedy in the garden is usually followed by a stunning success.

This year the Mahonia beali are flowering very sparsely, and I haven’t a clue why. This will result in few of the grape-like berries that follow in another month. The birds will miss them.

On the other hand, the blooms of Winter Sun mahonia were spectacular in late November and early December. I suppose it evens out. There will be so many flowers in another week that the mahonia will scarcely be missed, but Winter Sun in December is a treat because nothing else is blooming.

The Arnold’s Promise witch hazel is fading, its flowers lasting a week longer than normal with the cool temperatures. The flowers stalks of the hellebores are standing upright now, though the flowers face downward.

The leaves of Nandina domestica have suffered through the cold Winter with most leaves brown and dropping. They will not be clothed in green again until middle to late April, but then will be as good as ever. The other nandinas in the garden, Gulfstream, Harbor Dwarf, Firestorm, Moonbay, and Firepower have remained nearly evergreen, though the Firepower looks typically ratty until May. I grow it only as a reminder that I dislike it immensely. You are welcome to decide yourself, but for me there are better alternatives.

Okame cherry was showing but a hint of pink two weeks ago, but is in full splendor today. The flowers are short lived, as are all flowering cherries, always facing extremes in temperature, too warm or cold.

Vinca minor, or periwinkle, is a sturdy groundcover beginning to bloom now. Garden writers often scoff at periwinkle and pachysandra as too common, but they have gained popularity because they are outstanding plants. They frequently fight a difficult battle with tree roots to become established, and are worthy plants because they do this better than any other plants.

Two weeks ago the Andromeda, or Pieris, was just coming into bloom. Today, the early varieties are in full flower, and the later ones are ready to open in the next week. The bees have not begun to buzz around the pieris yet, but they will.

Cardinals have been especially active the past couple weeks, and soon the rest of the critters that hang out in the garden will be back from their Winter nap. This is an exciting time for gardeners, as each day presents a new blossom, a new bud, and a new challenge.

And leaf and flower buds are opening everywhere. The flower buds for the Lilac vulgaris (above) are beginning to open. The new leaves on the tree lilac (below) are just as delightful. Some wonders of the garden stand for all to see, some take more careful observation.