When is this going to end? April has been a rollercoaster, with more chills than thrills.

Not so far from typical weather as one expects, but enough that the itch to plant is turning ugly. Thank goodness for the blossoms that are hanging around from March because of the coolness, and April’s bloomers that are only a bit late.

Many of nature’s wonders are on schedule. The fiddleheads of the Ostrich ferns (above) are unfurling, an enchanting process each year. Though they prefer a damp location, ostrich ferns have spread quickly through dry shady areas of my garden. Not out-of-control quickly, but a pace to make the gardener appreciate a plant dealing with a difficult circumstance, for none is harsher than competition from shallow rooted maples.

Several rhizomes strayed into ground reserved for Columbines that are popping up, and the annual African daisy that blooms throughout the Summer. A simple tug on the out of place fern popped the plant loose with a chunk of root, so that it was replanted in a preferred spot. 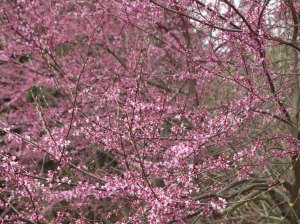 Redbud (above from the weeping redbud and left from Silver Cloud) is in its full splendor, poking its head from the forest edge along the highways. There are many shades of flowers, all similar but unique, as trees that grow from seed will show natural variation. Nursery grown trees are usually propagated from cuttings, so the genetic tissue of their offspring are identical and blooms will be the same color except for differences caused by their environment. 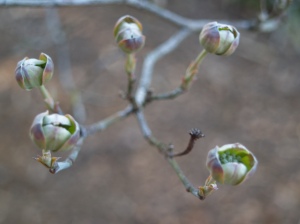 Documenting the progress of buds and flowers through the weeks might seem repetitious to read, but the gardener grows impatient with delays from the “expected” blooming time due to cool temperatures. Dogwood buds were beginning to open a week ago (last week above and today below) , and have continued unfolding in my northern Virginia garden through a week with highs of forty-five degrees and seventy-five.

Several days remain before the expanding dogwood buds show color. Examining the buds today you would wonder if they’ve been somehow damaged to ruin this years’ flowers, but a short week away the native dogwood will be unblemished and glorious. Last year there were fewer than average blooms, but this year the trees will be covered.

A reader inquired weeks ago whether dogwood would make a suitable backdrop in full bloom the second week of May for a family picture. No, though the flowering season is late, dogwoods will be past bloom at this date. The correct date that dogwoods will reach their peak (as in the photo below from last year), I pronounced, will be April 26.

By some spectacular stroke of luck the 26th might be close enough in my garden, but his appreciative thank you reply encouraged me to visit the tree on the grounds of a church in Washington D.C., a zone warmer than mine. It is probably in full glory today, ten days prior to my foolhardy prediction. If I had asked all the right questions, where is the tree, is it on the south side of the church, and in full sun, I should still have little idea to place a date on an event that only natural forces control.

I have sufficient powers of observation to predict flowering times accurately within two weeks, perhaps more likely a month. And why bother?  Gardeners need not live our lives like the groundskeeper of Augusta National golf club, who is responsible for defying nature to assure that thousands of azaleas and dogwood are in bloom for their annual golf event.

We need not do battle with nature, or take pains to anticipate its every move, only enjoy each event as its time comes.

The yellow flowered Elizabeth magnolia is now in full bloom, and Jane is just past her peak, but Dr. Merrill and Royal Star have few remnants of the blossoms that sustained much longer than expected.

The fragrant Viburnums, Carlesi (left) and Burkwood (above) are beginning to bloom. Though I am scent impaired, their sweet fragrance is unmistakable walking through the garden.

There are many other flowers in the garden today, and at the risk of going on too long, I will show them all, for next week there will be many more.

Though early varieties have faded, several daffodils are still flowering, but other ‘minor’ bulbs also. The Grecian Windflower, Anemone (above), began to bloom a week ago and remains delightful today, though the flower shows signs that it will soon fade. It is an inconsequential plant after bloom, and indeed my numbers have diminished over the years as they were mistaken for weeds.

Grape Hyacinth, Muscari armeniacum (above), has naturalized in small numbers into the woodland beside the garden, here poking through mayapple.

Viburnum is not the only highly fragrant shrub in bloom now. Daphne ‘Carol Mackie’ (above) has green and white variegated leaves and extremely fragrant blossoms. Daphne is reputed to be finicky and short lived, and I had a trial or two before this plant settled in almost ten years ago. 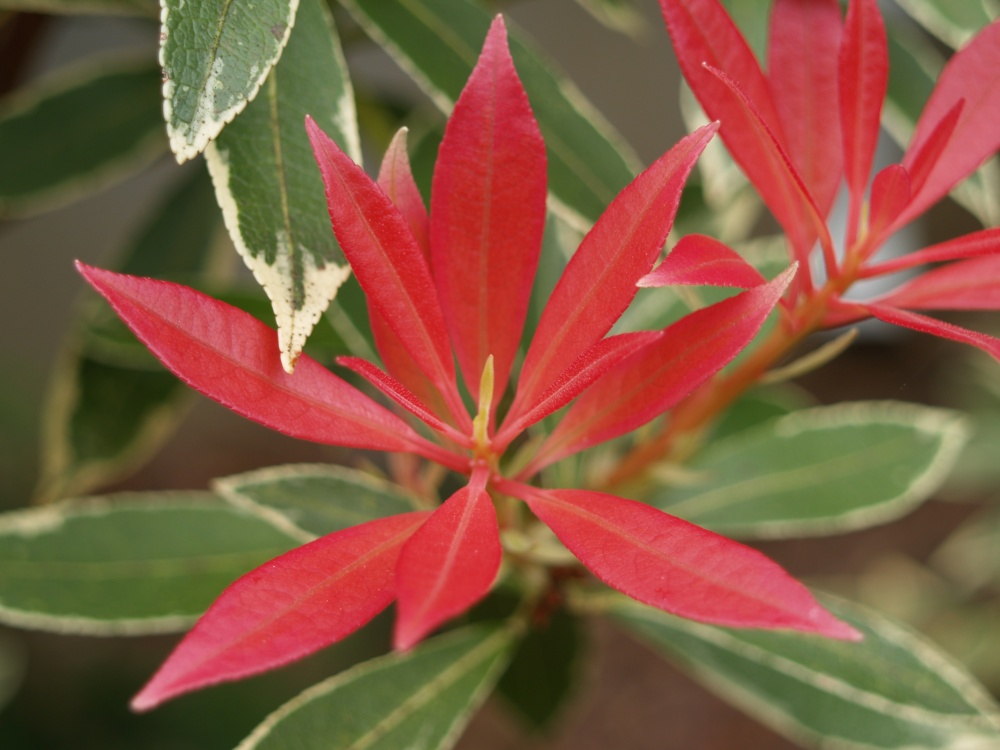 Though flowers grab our attention, the garden holds many wonders in bud, leaf, and seed. The red new growth of Pieris ‘Flaming Silver’ (above) is set off by the variegated leaves in the background.

The emerging lime-green leaves of the Golden Full Moon maple (above) from their crimson sheath are a pleasure for the gardener not seduced only by Spring flowers. 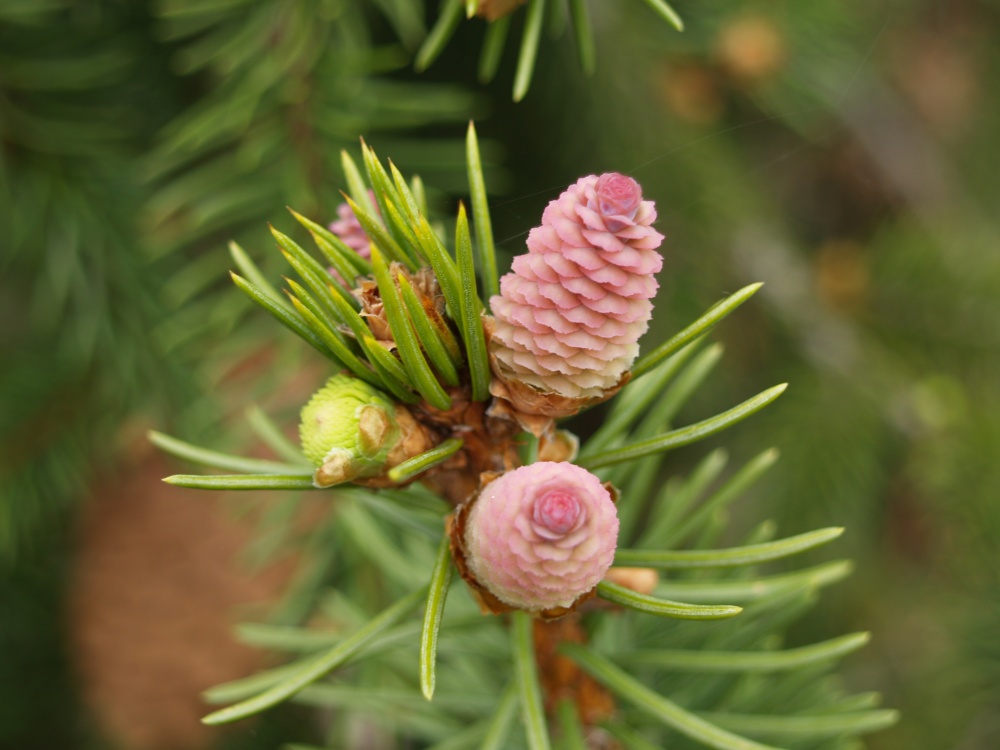 The seed cones of this weeping spruce (above) a low growing Norway spruce of some sort, are as colorful as any flower. And so this week’s travel log through the garden must end. Though several cool days will follow, warmer days must be on the horizon.