They’re everywhere! Blooms, blossoms, flowers, everything that can bloom is blooming.

The magnolias, cherries (above), and serviceberry blooming in March are long past, victims of the ninety degree temperatures a week ago that accelerated their cycle from flower to leaf. I feared the same fate for the redbuds (below)and dogwoods that flowered earlier than is usual, but cooler temperatures arrived in time that these blooms will last for several weeks. There is no better time to be in the garden, surrounded by flowers, with warm days and cool nights. Most of the early season garden chores have been completed, so now is the time to enjoy, and there’s much to cherish. 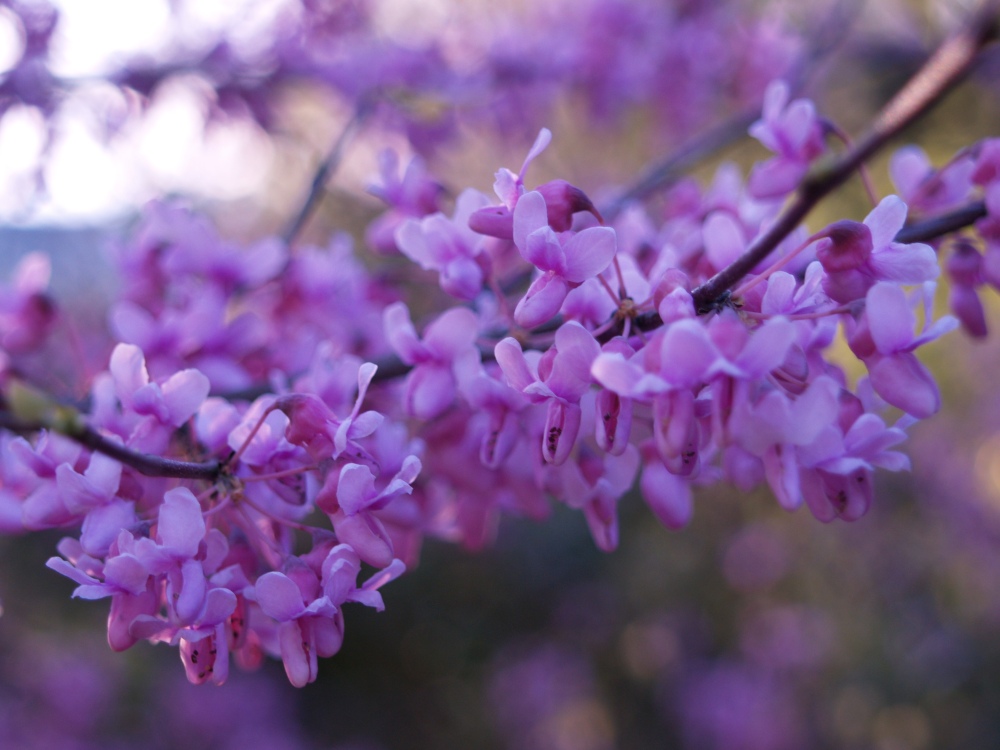 While trees that flower in March are subject to capricious frosts and freezes, April is somewhat more predictable. Though frost and an occasional freeze are not unusual, their stay is short, and there is far less likelihood that blooms will be damaged. The late spring blooming magnolias are rarely damaged, and I have never witnessed frost injury with redbuds and dogwoods.

In my garden there are several types of redbud, the burgundy leafed ‘Forest Pansy’ (above), variegated ‘Silver Cloud’ (below) with green, white, and sometimes pink splashes on the leaves, a yellow leafed ‘Hearts of Gold’, and the weeping ‘Lavender Twist’. All have similar blooms, though there are often subtle variations of color resulting from sun exposure or the natural variations of seedling grown plants. I  do not have a green leafed redbud since I am endlessly intrigued by variegated and plants with bold leaf coloration, but our native redbud (Cercis canadensis) is an extraordinary tree with beautiful small pink flowers that persist for most of April and are followed by large, sturdy, drought resistant heart shaped leaves. Their mature size is small enough for most gardens, though they will grow as wide as they are tall with age. 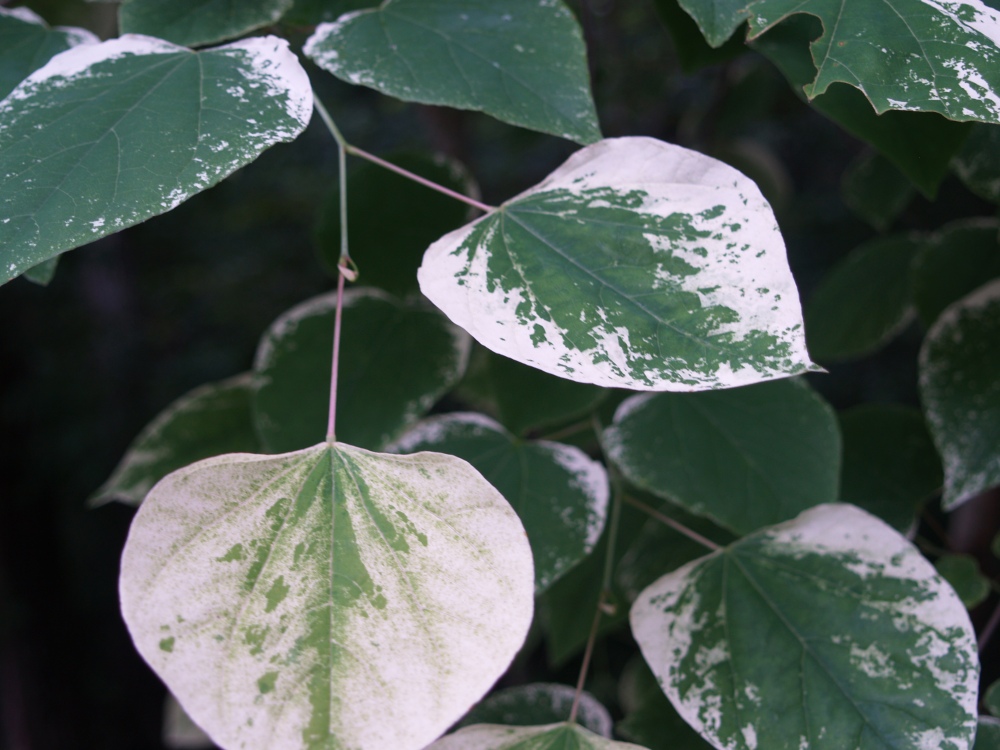 If there is a finer flowering tree than redbud I would judge our native dogwood (Cornus florida, below) to be its only close competitor. If redbud has any fault it is that the fall color is an unspectacular yellow, while dogwood’s crimson foliage is unsurpassed by any tree, and accompanied by bright red berries that would be more prominent if birds didn’t promptly consume them. Of course, the large blooms are recognized and beloved, whether the more common white or various shades of pink. The red flowered Cherokee Brave is only slightly darker than what most people would call pink, but whatever you would call the color it is a wonderful tree.

The native dogwood has a troubled reputation for being disease prone, and this is true to some extent, but vigorous selections are commonly available that are much less susceptible. In the past decade there were fears that dogwoods would succumb to an anthracnose  leaf fungus and to powdery mildew, and it is true that trees in forests in the eastern United States have suffered devastating losses. However, damage to garden grown trees has been very limited, and so long as the Cherokee selections (Cherokee Princess and Brave), and Appalachian Spring, are grown, there is little chance of substantial damage other than some black spots in abnormally wet springs.

I would not be without the native dogwood in my garden, and I have several of the white flowering Cherokee Princess, a peculiar weeping white dogwood that hardly substantiates a moment of your attention, and a lovely green and gold variegated leaf dogwood ‘Cherokee Sunset’ (above)with nearly red flowers. ‘Sunset’ is bothered by excessive rainfall with leaves gnarled and stunted, but in years with normal precipitation the colors of the leaves are magnificent, and the tree is a treasure even though it grows slowly and is more disease prone.

If you are inclined to take a safer route, but would like a dogwood in your garden, then the late May blooming Kousas are an excellent choice, as are the early May flowering hybrids such as Stellar Pink (which is only barely pink in the warmer climes of the east coast), and white blooming Aurora, Celestial, and Venus. I have several Kousas in my garden, both green and a couple of green and white variegated leaf types (Wolf Eyes, above), as well as the pink flowered kousa ‘Satomi’ (below) which is notable for its glossier-than-is-normal leaves. Stellar Pink grows more quickly and upright than the native dogwoods, or the more bush-like Kousas, and I was afraid at an early age that it would not bloom so heavily as others, but I have been more than satisfied as the tree has aged.

It should be clear that I am obsessed with the redbuds and dogwoods, and indeed I have little doubt that I will find space to add several more through the years. Perhaps within another twenty years I will have reached my fill, though I can imagine it might be more if I should live so long. I would recommend that you find whatever space you can in your garden to plant as many dogwoods and redbuds as you can afford and have space for, and I have found that it is well worth your while to delay the purchase of furniture and cars to enable adding more of these delightful flowering trees.

Still, there is room in the garden for other fine April blooming trees. The Carolina Silverbell (Halesia caroliniana, above) is often in and out of bloom too quicky, but the tiny hanging white bells are quite wonderful, and if there is room remaining after you have had your fill of redbuds and dogwoods there are few finer trees for April blooms. 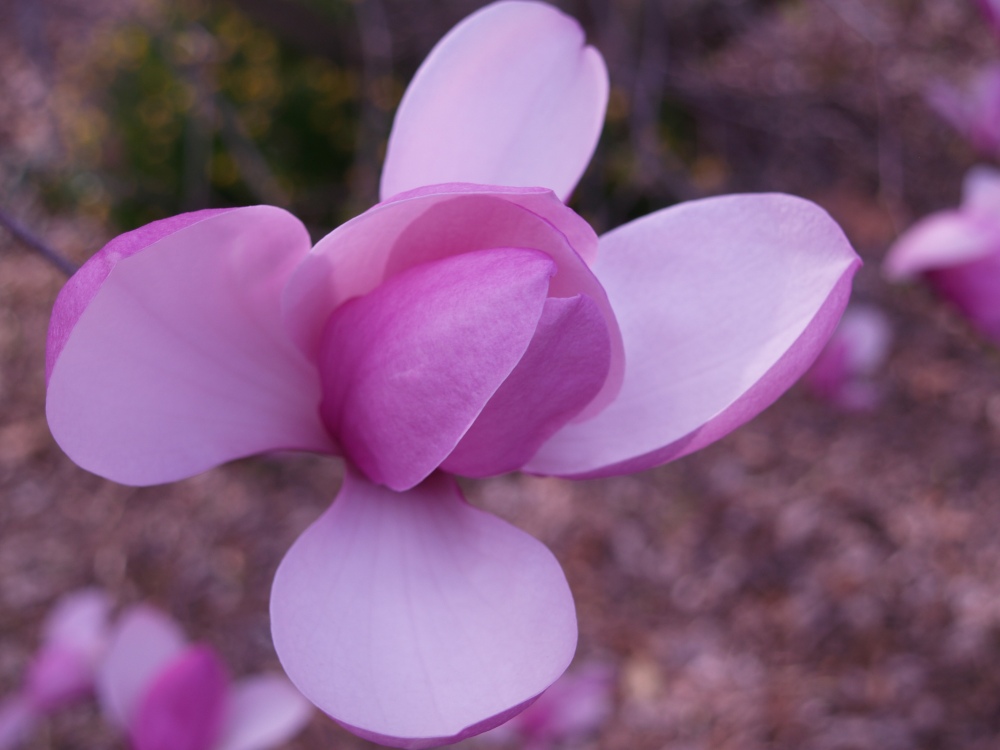 Though the blooms of the mid season blooming magnolias are on their way out with the warm temperatures, they are  well worth mention as extraordinary trees with large saucer-like flowers. In my garden ‘Jane’ (above) has grown to monstrous shrub like proportions, fifteen feet tall and wide, but I have never begrudged the space it has consumed with its large purple blooms in late March into April and sporadic flowers through the summer into fall. The pale yellow flowering ‘Elizabeth’ (below) is more upright in habit, and is another valued tree in my garden. 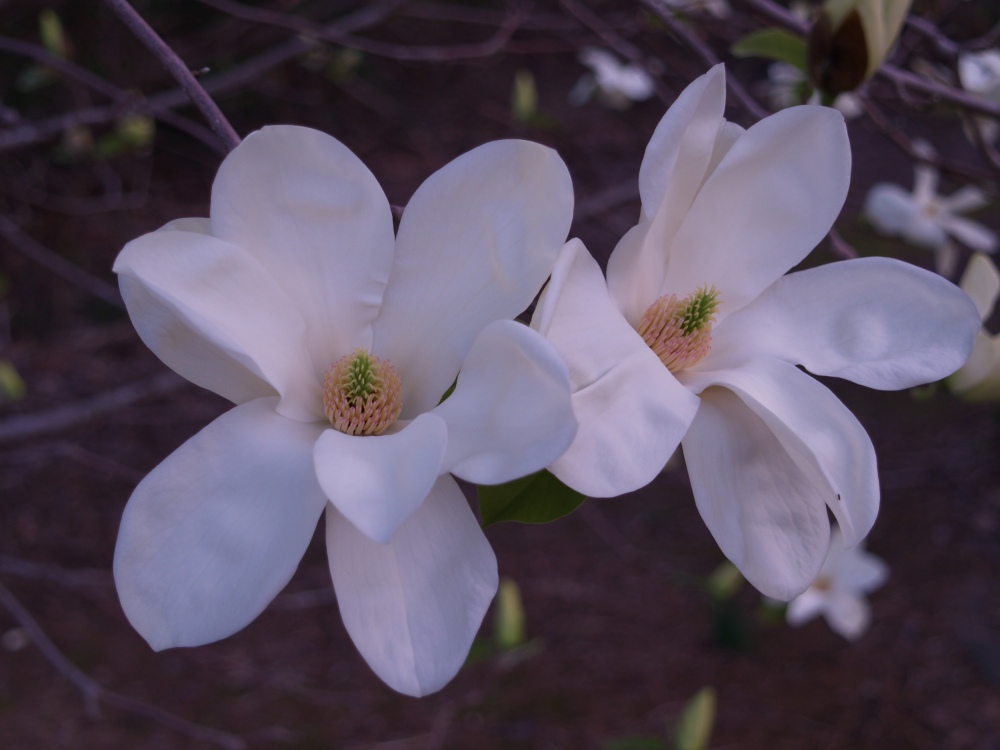 As I have been singing the praises of the flowering trees I have neglected to mention the Japanese maples that are another of my favored trees, and then there are the flowering shrubs, lilacs, spireas, camellias, azaleas, and on and on we could go, but we’ll have to do this another day for I’m certain that your patience has worn thin, and there is much ground to cover to detail the wonders of the April garden.