In today’s garden section of the Washington Post garden writer Adrian Higgins takes the azalea to task, mostly I think, for being so common. I don’t think that he finds any particular fault with them, except that they’re everywhere, and he offers some splendid alternatives. I have a few complaints of my own, and have only a few in my garden, but there’s a nearby garden where azaleas have been planted in groups, ten of one color, then another and another down a long property line. Dogwoods and redbud in bloom are planted at intervals, so the line of azaleas doesn’t become monotonous, and the effect is magical. For several weeks I wish this garden was mine.

Single azaleas in a range of colors planted in close proximity can be jarring to the eye, and I see this too often, but planted in groups, and with some attention to coordinating colors, there are few superior plants in bloom in late April. Yes, azaleas suffer some issues, especially with lacebugs that chew on the undersides of leaves and must be controlled with pesticides to keep foliage attractive. And, in late fall azaleas drop a portion of their leaves, a few or many depending on variety, and so will look quite naked if planted in a prominent location, and particularly at the front of the home.

Of the dozen or two azaleas (Azalea Autumn Twist, above) I planted in this garden over twenty years ago, only a few Delaware Valley Whites remain, four or five paces under the forest’s canopy, but in an area with few competing maple roots. With shallow root competition the other azaleas lasted a few years, as many as ten as they declined each season. The fault, of course, was not with the azalea, but with the designer, the planter who punished these fine plants with a most undesirable location. They are gone now, replaced with shrubs and perennials that will withstand the horrid conditions.

For years I was reluctant to try more, and of course there are many wonderful alternatives, but I was tempted by the promise of azaleas that bloom off and on throughout the spring, summer, and fall, so I planted a dozen varieties of Encore azalea (Autumn Rouge, above), and a year later another ten. I was careful to avoid the dry shade that spelled the doom of the earlier plants, and I planted the Encores in a range of conditions from nearly full sun to heavy shade.  I’ve been both delighted and mildly disappointed.

Delighted by blooms from late April into May (Autumn Royalty, above), and mid September flowers that often last into early November when they are appreciated more because there’s not much else in bloom at the time. Of the twenty or more varieties I’ve tested, not all bloom well in my northern Virginia garden in the foothills of the Blue Ridge. I’ve decided that some are too far north to reset flower buds to bloom a second time, and that a few others are just not vigorous enough to survive without ideal soil and irrigation. The six or seven best varieties are perfectly cold hardy, grow with some vigor, and will bloom dependably twice a year, not spring, summer, and fall as reputed in their advertising which is valid for the deeper south, but not in this area. 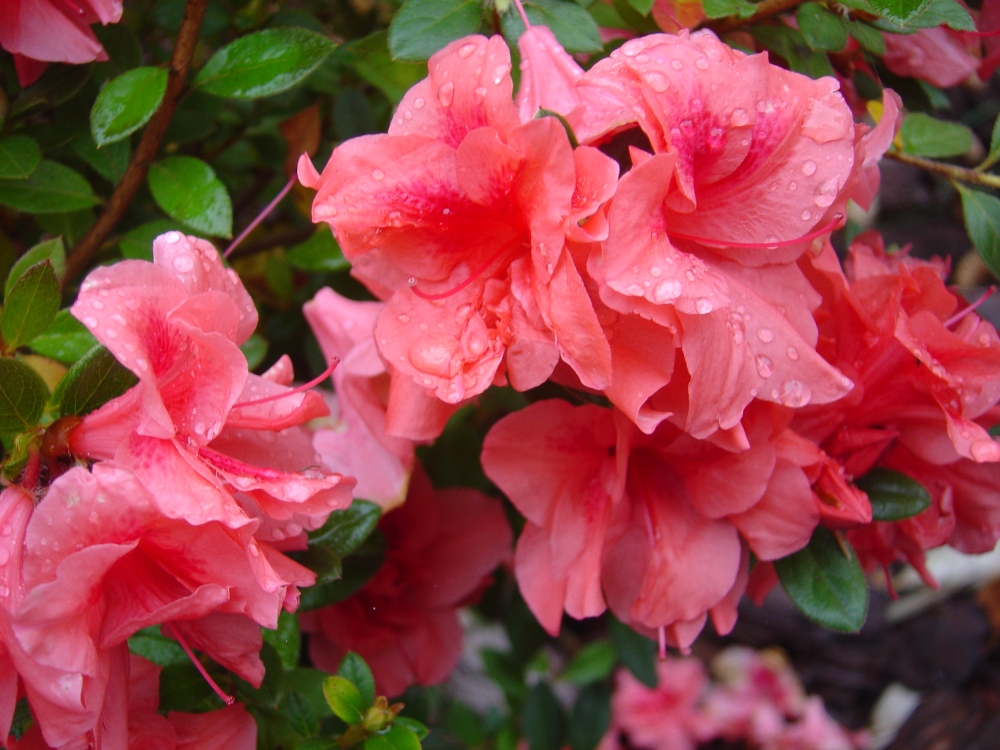 I have plenty of blooms in my garden in April, so azaleas are nice, but not essential, and I could easily be persuaded that this or that is a better choice. However, in October and November I am quite pleased to have planted them, and though they’re not the only blooms in the garden at that time, I wouldn’t be without them. A side benefit of Encore azaleas (Autumn Princess, above) is that they are more resistant to lacebugs, so I don’t have to spray pesticides to keep them looking good.

Today there are a number of plants blooming in the garden that are treasured more than azaleas, but throughout the year there are few more valued. I will respectfully disagree with Mr. Higgins evaluation, and wholeheartedly recommend Encore azaleas. And, I wouldn’t mind a grouping of the good, old fashioned Hershey Red below the hydrangeas near the swimming pond’s waterfall, a few more Delaware Valley’s to bring some light into the forest’s edge, a few of the low, compact Chinzan near the stone patio, and ……