The nighttime temperature plunged to forty one early Sunday, and since the thermometer’s sensor is attached to the house I must presume the actual temperature to be a few degree’s cooler. Fortunately, the night was breezy, so there was no frost, but this was close enough to motivate me to move the pots of tropicals indoors before they were injured by the next cold night.

In fact, I had energy only to move the anthuriums and bananas, the variegated and tricolor gingers, a red leafed cordyline, the tall tapioca (Manihot, above), a few of the agaves, and a large geranium (below). Another dozen pots of various elephant ears, and agaves too large to fit in the main living areas were assembled near the basement door to be brought inside another day.

I was surprised (again this year) by how much the tropicals have grown, and where half a dozen pots had been jammed together against the dining room window, now only four will fit. The red cordyline has doubled in size, and it is now much too large for the area beside the fireplace in the den, but there is no other space with adequate sunlight, so there it will stay.

My wife is often displeased with the transition of the tropicals to indoors, with spilled soil, scuffed floors, and debris scattered about, and later bugs and leaves that drop as the plants adjust to the lower light and humidity, but today she was rather happy with the process. Mostly happy, that is.

When I went back outdoors to fetch the elephant ears she heard the cries of a frog that was inadvertently brought inside, and I was warned that I’d better capture the poor creature before it dies (unlike the dead ones she had to clean up last year), but otherwise the move was made with a minimum of disruption.

Since fewer pots will fit in the living areas that have more plentiful natural light, there will be more sent to the darker basement, and it is just as well that I’ve decided to overwinter all of the elephant ears down there. The large leaves shed a regular drip of water, and the wood floors are dotted with water stains from prior years. 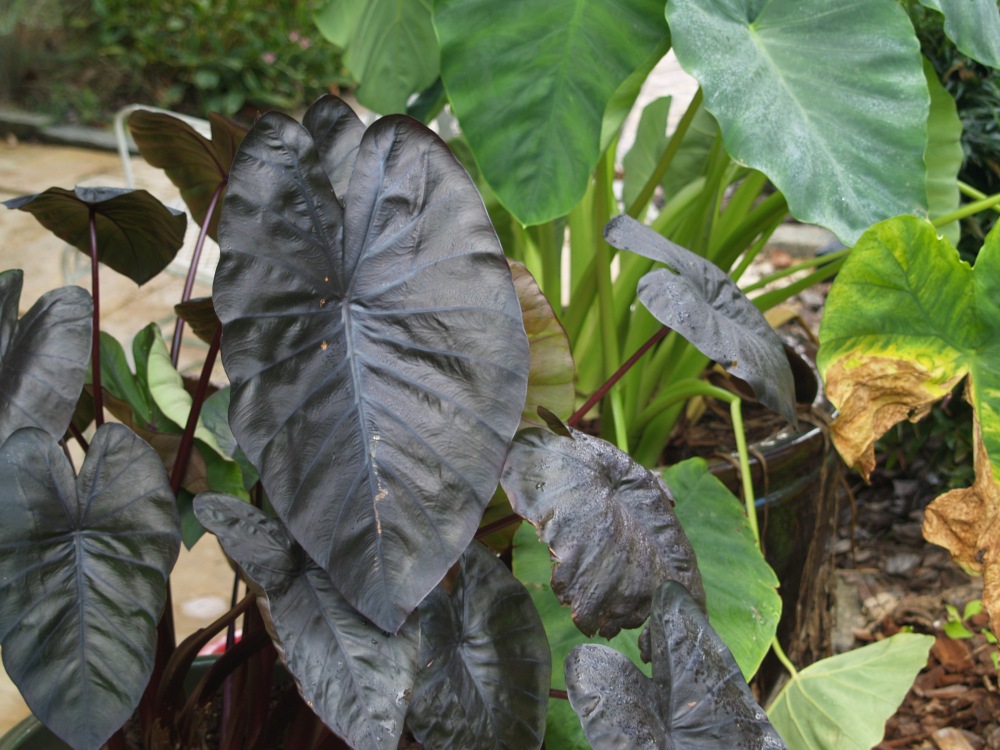 With fifteen or twenty large pots clustered around a lone glass door the natural light will be stretched further than in the past, with the shorter elephant ears and agaves close to the window and tall New Zealand flax and elephant ears to the back. There is no doubt that a few fluorescent lights and an inexpensive timer would make the overwintering much easier for the tropicals subjected to the dark basement, and perhaps I’ll work them into the budget.

A few tropicals will be left outside to freeze and die, though it would be quite simple to take cuttings of the strawflowers, coleus, and geraniums to root in water. There are already dozens of small potted this and thats scattered about, small agaves, haworthias, and echiverias, and this is quite enough to care for.

Now that the large pots have been brought indoors they will require little care, only an occasional sip of water, and certainly no fertilizer. Insect problems are rare, except for ants and crickets, but they do the plants no harm.

The largest elephant ears, as well as cannas and dahlias (above), are planted in the ground, and the tubers and roots will be dug and stored in the cool garage after the foliage has been blackened by frost in the next few weeks. The digging and moving of pots has become quite a chore, but the large and robust tropicals scattered about the garden are ample reward for the effort.