On a dreary January morning a thick fog has settled over this low lying garden nestled between foothills at the western edge of Virginia’s Piedmont. Today, temperatures will be slightly above the seasonal average, with the slight cover of snow and ice melting quickly in the relative warmth. My rambles through the garden are more infrequent in the winter months, though a time or two each week I’ll visit to check on the emerging buds of hellebores (below), late winter flowering bulbs, and the witch hazels (further below) which will often begin to show a glimpse of color early in February. 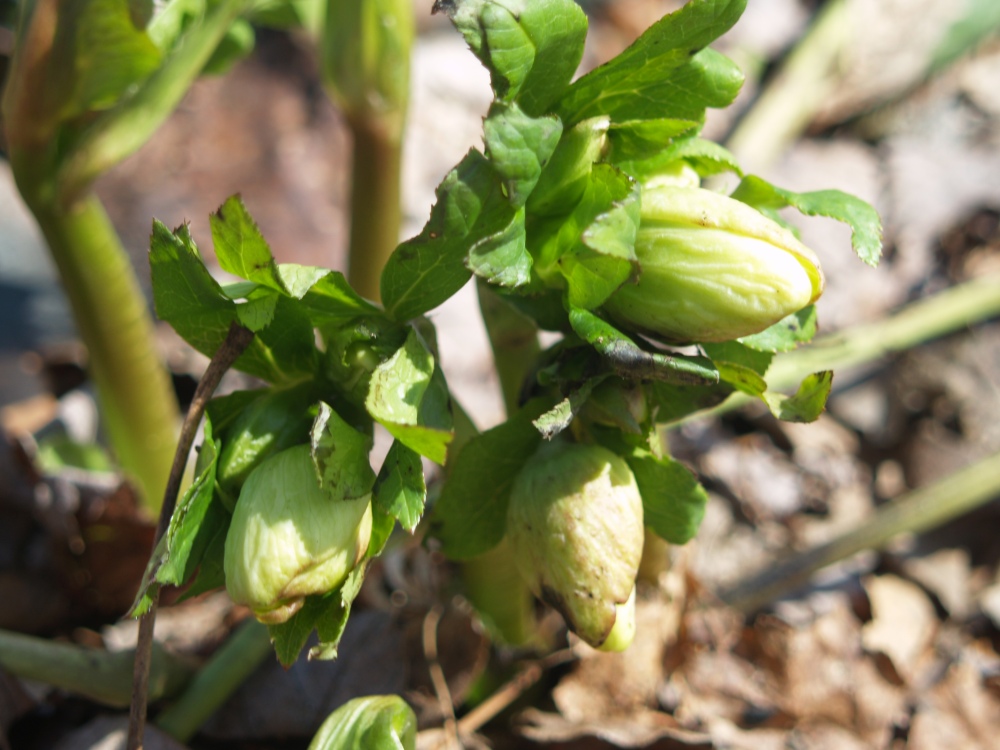 The mail order seed and perennial catalogs have begun to arrive, and I am scouring each page preparing a list of plants that I can’t live without once the garden centers open in March. I will not consult my wife! I have been working this garden for more than twenty years, and probably fifteen years ago I first heard her command, “NO MORE PLANTS!” Now, in most cases I am a good listener and obey without question, but, be reasonable, there will never be a time when there are too many plants.

The problem this year, as always, is that there are more plants that I “must have” than there is space available. I have given up on planting more trees, there really isn’t enough room, though I would be delighted with a few more Japanese maples, and a couple more dogwoods and redbuds. One day, early in the spring I’ll fill a truck with goodies from the garden center, unload them on the driveway, and then try to figure where the heck they’ll all fit.

Of course, this is not the proper way to go about planning the garden, and through the years I’ve made more errors in my haste than I care to recall, requiring much labor in digging, pruning, and transplanting to set things right. Occasionally, the corrections are realized far too late to save the innocent plants, which are engulfed by a neighbor, or must be cut out with a chain saw.

Ignorance is not my excuse. I’m aware of what should go where, but I suppose that I’m guilty of over exuberance. More is not always best, and if I live long enough perhaps I’ll learn that lesson.

In a case of “too little, too late” I have drafted a design of the garden (not to scale), but of course this has been accomplished after the fact, and only serves to show the jumble that the garden has become. I have drawn this as an aid for readers who have commented that they have become hopelessly lost as I describe the route as I wander through the garden. I appreciate that anyone cares at all to follow along, though I have doubts that the design will be of any assistance. Certainly, I will pay it no attention when I plant in the spring.

The property is nearly an acre and a quarter, and the house sits quite close to the street, which from the start was the reason that my wife and I selected this lot. Less snow to shovel off the driveway, and more garden behind the house. The house faces the south and east, and with a large beech the front garden is sunny only for a short period in the morning. Along the southern border of the property there is a stand of mature forest, close enough to the back corner of the house that I am relieved that the kids have grown and moved out, so that when a maple crashes through the roof one day no harm will be done, except to the house.

The sideyard to the south, sandwiched between the tall structure and the forest, is quite shady, and the soil poor and cluttered with roots from the maples and poplars. A stone path winds from the front between shrubs and hostas that flop about to a small pergola at the top of the rear garden.

The upper portion of the rear garden is the most congested area, and the design gives barely a clue to the jungle it has become. In this area there are three ponds, and a stream that has been constructed to run along side of another stone path. There are two patios, one of Pennsylvania bluestone flagging, and the other of slate, and both are roughly circular, though long established plants blur the edges considerably.

Below this jungle is a section of lawn, left to remain as grass since the septic field lies beneath. Redbuds, fringetrees, and spring blooming magnolias are planted along the periphery.

Beyond the small swath of lawn is the summerhouse, a term not of grandeur, but for lack of a better description for a modest metal structure with a solid roof to keep the rain out, and four posts. The floor is travertine, and below is a small stone patio and fire pit that leads to the swimming pond.

Because of the dense plantings in the upper garden the swimming pond cannot be seen from the house, but once in the rear garden the summerhouse and pond are the focus of the design, and small trees, shrubs, and perennials radiate from this point.

At the southern edge the large pond rises several feet above grade, and a dry stacked stone wall has been constructed to retain the soil so that a path can be accessed between the pond and the garden shed. There is another area of lawn in the center of the back half of the rear garden, and this area my wife insists must remain open for croquet, or some other nonsense, but probably just to be ornery. In any case, this lawn gets a bit smaller each year, and it would  not be surprising if it would disappear entirely some day.