The blooms of ‘Merrill’ and ‘Royal Star’ magnolias opened fully a few days ago, just in time to be damaged by a series of cold nights. Not unusual, but I was hopeful that unblemished flowers would remain for a few days. The frost damaged edges of petals have browned, but the trees are still quite magnificent from a distance.

The early flowering ‘Okame’ cherry is past bloom, just as the pink weeping cherry (above) has begun. The weeping cherry was damaged a few years ago when the purple leafed Canadian chokecherry was toppled in a spring storm that spawned scattered tornadoes a few miles up the road. It has begun to fill the bare areas, and I’m happy now that I decided not to cut it down.

The blooms in the garden today are too numerous, and I have only a short while to write today, so I’ll begin with some emerging buds (Bottlebrush buckeye, above) and leaves that I found interesting, and I’ll return in a few days with the flowers. By that time there will be more blooms, and keeping pace over the next two months will require constant attention. I’ll do my best.

Not a flower, but of interest nonetheless (to me, anyway), are the emerging Katsura leaves (Cercidiphyllum japonicum, above). The red leaves are bordered by serrations that sparkle in the sunlight, which for some reason I had not recognized before today, though the tree is nearly twenty years in the garden. Katsura makes a fine tree for a moderate sized property. It is not so fast growing as a maple or oak, and thus will never be so common, but if your concern is a splendid tree rather than instant shade, then this is a fine choice. And, of course, I would recommend closely monitoring your Katsura early in April so that you can witness the extraordinary leaves.

The ferns have woken from their winter slumber, and Ostrich fern (Matteuccia struthiopteris, above) grabs your attention as the fiddleheads unfurl. Ostrich fern is the tallest of the ferns in the garden, and it spreads at a comfortably rapid pace, though my wife chops out the ones that pop up between stones on the patios. It prefers moderately damp soil, but in wet and dry areas in the garden it thrives without any attention. I find it curious that Japanese beetles enjoy feasting on foliage that has grown into the sun in July, while the shaded ferns are relatively undisturbed.

A colony of Ostrich ferns grew in a damp area at the edge of the forest when I first began the garden. The wet spot is spring fed, and the ferns are at the margin, where the soil stays barely damp through most of the summer. Skunk cabbage (Symplocarpus foetidus, above) grows in the wetter areas, and then the dampness drains along the border of the garden to a wetland at along the back property line. The water from the spring is no more than a constant trickle so that the water is not seen, but the ground remains damp. 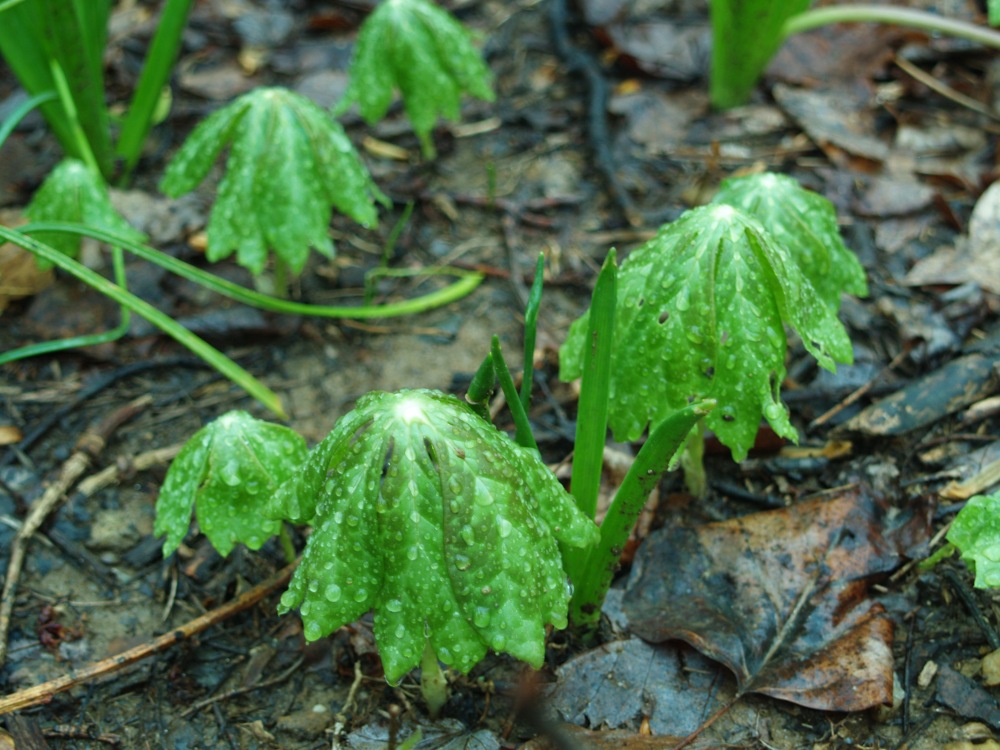 Just above the ferns and skunk cabbage was once a thriving colony of mayapples (Podophyllum peltatum, above). As the neighboring properties were being developed trees were harvested from the woodland so that the density of shade has diminished, and so have the mayapples. One area where the forest juts onto my property was spared the harvest, so here a small patch of mayapples thrives under overhanging rhododendrons.