… Except the roses. And the roses look great, but it’s a bit too early for them to bloom. I cut most of the roses back severely a year ago, so I’ve not pruned them at all this year, and they’re covered in buds, ready to bloom in a few weeks.

At every turn there are several somethings blooming, and late in April and into May the gardener can easily convince himself that he has created a masterpiece. The reality is obvious by mid-summer, but for today there is every reason to be entirely satisfied. 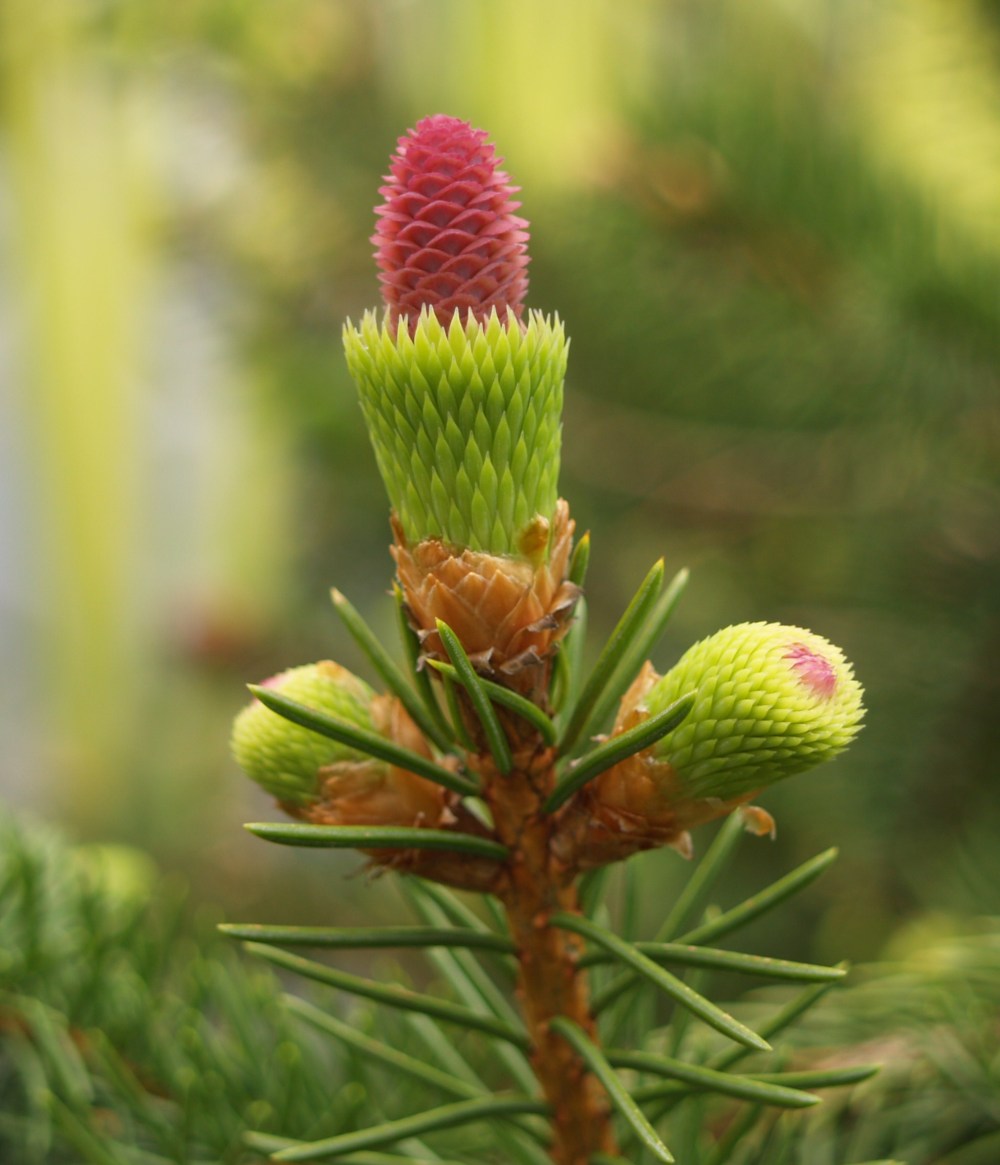 I am seduced by flowers like everyone else, but when I wander about the garden I am just as pleased to see an interesting bud, or an emerging leaf. There are two Acrocona spruce (Picea abies ‘Acrocona’, above) in the garden, and through much of the year these are awkwardly branched, not weeping, but not distinctly upright. Most people would not give a second glance to this ungainly selection of Norway spruce. But, in late April raspberry red cones begin to form at the branch tips, so that the spruce appears to be in bloom from a distance (below). 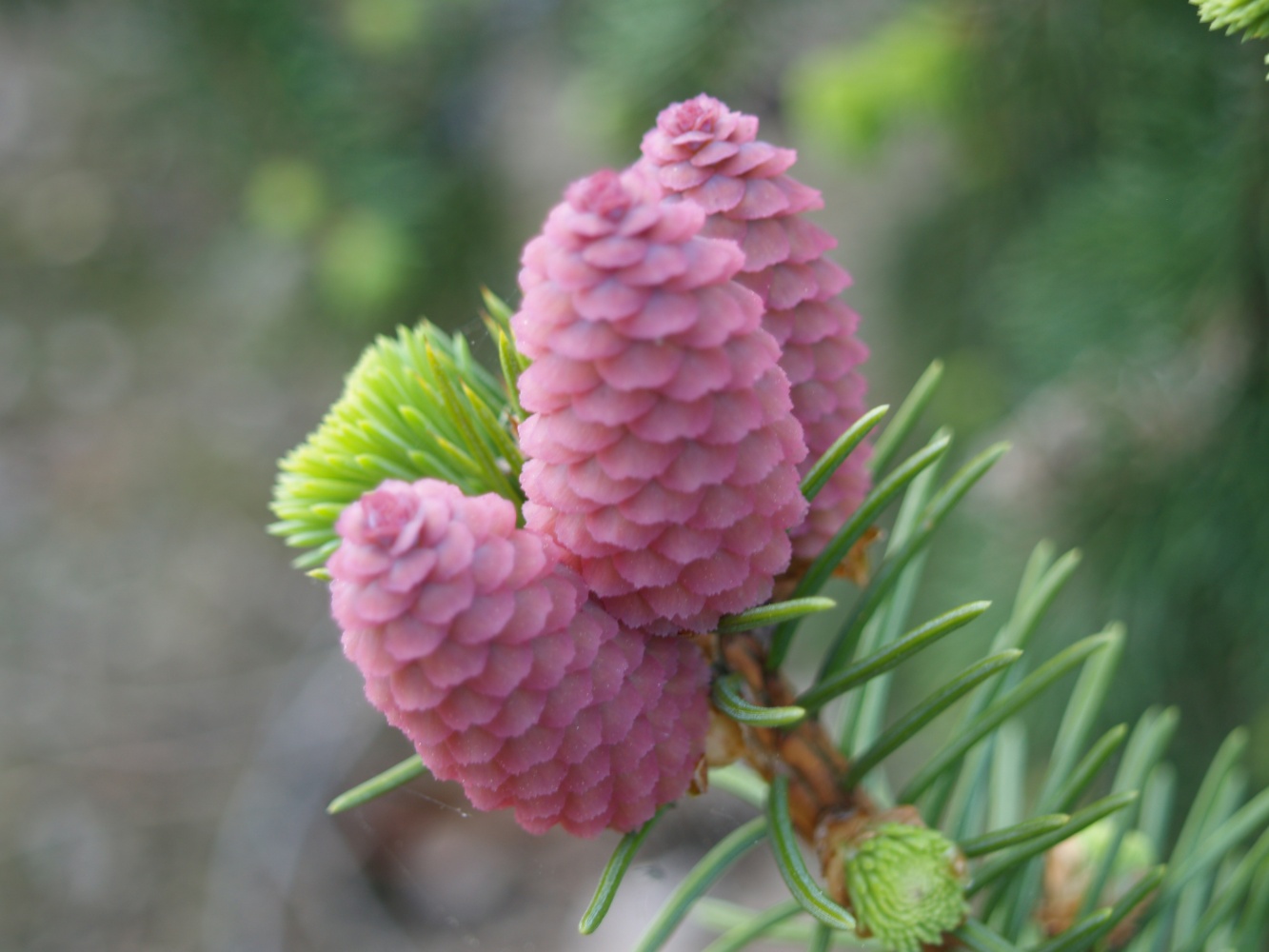 Since I have been delayed by rambling on about Japanese maples the past week, the number of blooms in the garden is greater than can be fit into an entry of reasonable length. So, today we’ll feature the blooming shrubs of late April, and a few days later we’ll cover the perennials. By that time there will be more blooms, so I don’t expect to catch up until June, or later. 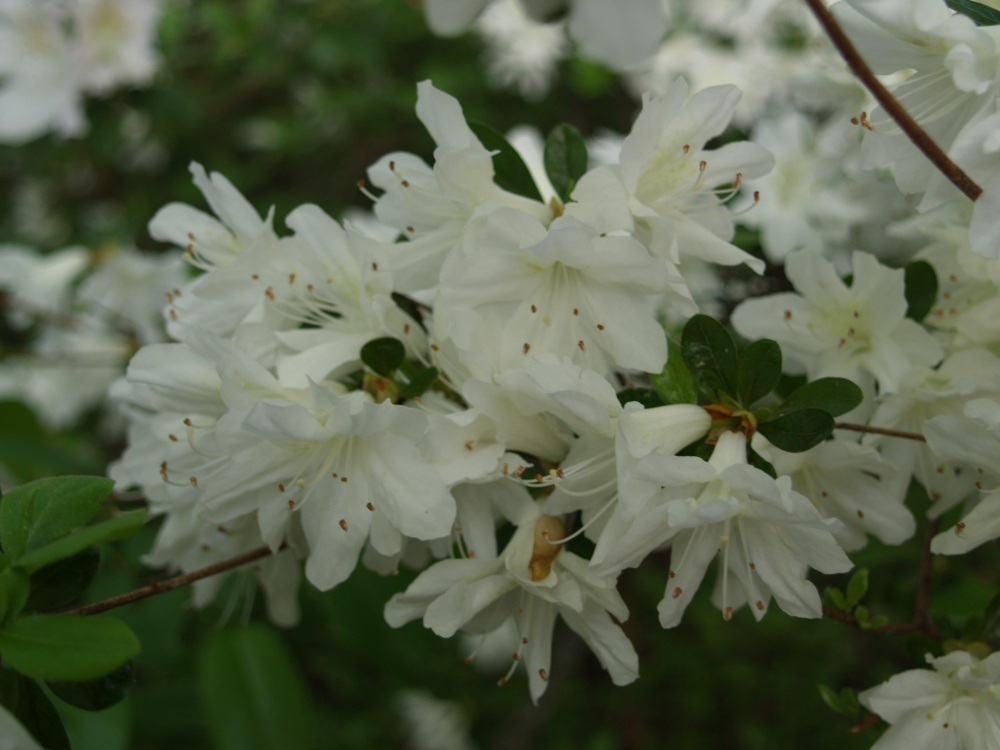 The camellias have been disappointing this spring, except for the autumn blooming ‘Winter’s Interlude’ that flowered better than any of the spring flowering varieties. Redbuds and dogwoods bloomed wonderfully, and it appears that the azaleas (Azalea ‘Delaware Valley White, above) will do the same. 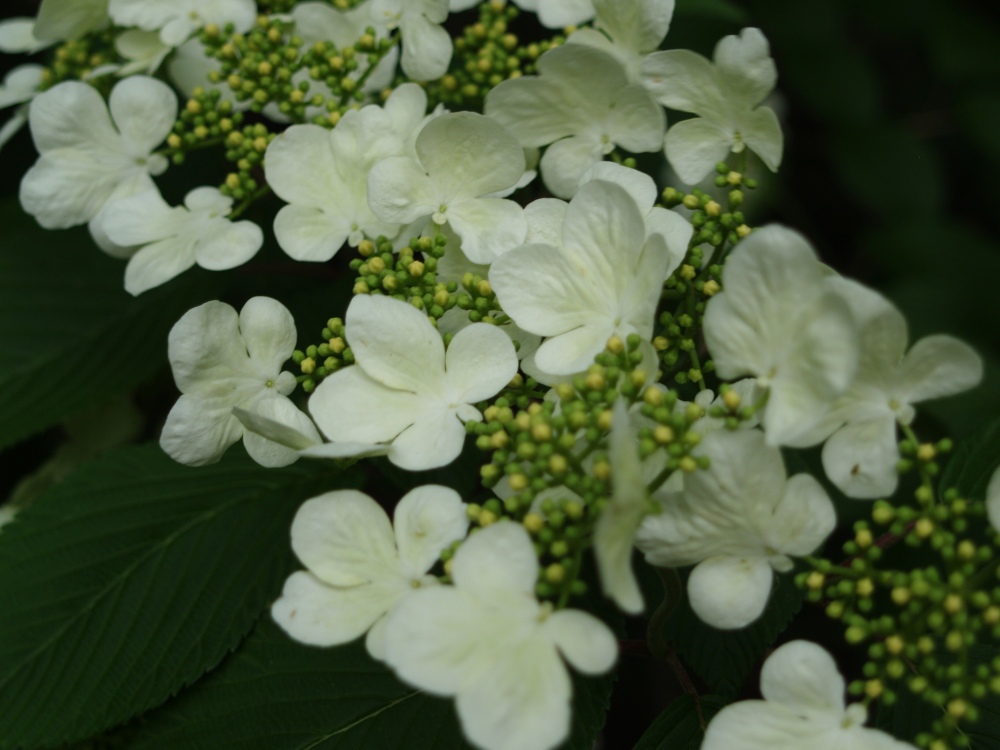 The fragrant blooms of Koreanspice and Burkwood viburnums have passed, but now the non-fragrant but splendid Maresi doublefile (Viburnum plicatum var. tomentosum, above) and Pragense viburnums (Viburnum x pragense, below) are in bloom. In the garden both have been shaded a tad more than is to their liking as the forest’s edge has spread through the years, but they continue to flower. 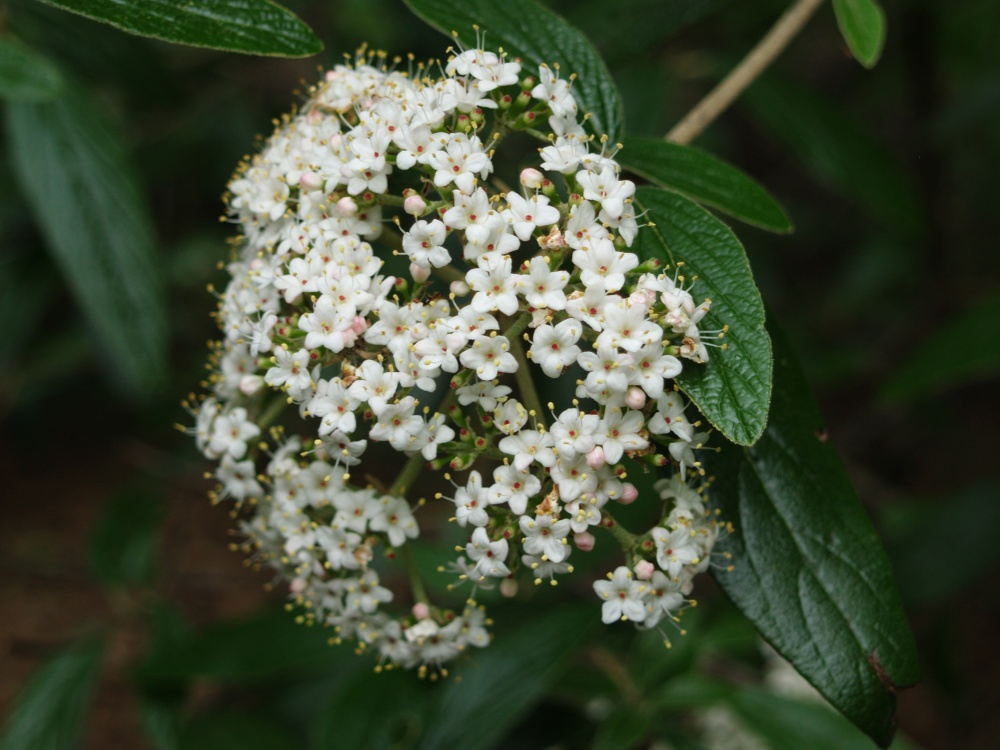 The Chinese Snowball viburnum (Viburnum macrocephalum ‘Sterile’, below) is just beginning to flower on the shaded south side of the house, and the blooms are not diminished at all by the lack of sunlight. The large, hydrangea-like flowers begin a light green, and as the flower head expands the color lightens to cream, and then to white. The snowball viburnum grows taller than ten feet, and nearly as wide, with a loose habit that is too coarse to be a centerpiece, but they are valuable when planted to the side or back of the garden. 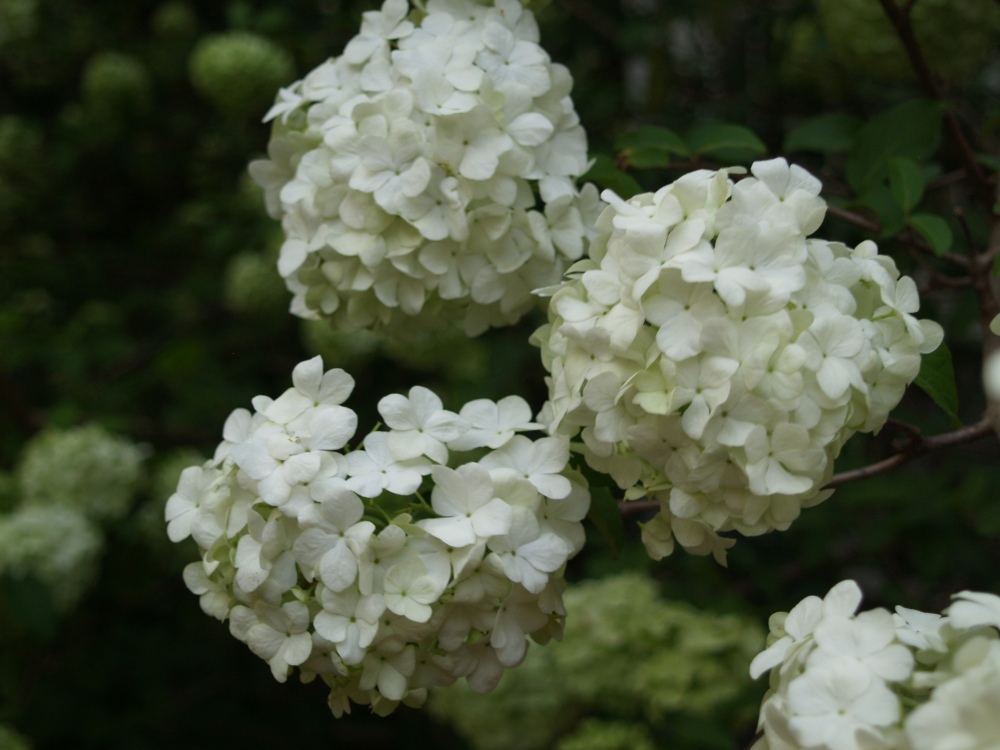 Perhaps this will be the year when this overgrown shrub is cut back by several feet. This task has been on my wife’s to-do list for several years. I cut the spiraled topiary boxwood that was obstructing the path to the back deck into a tight cone a week ago, and if I chop back the snowball viburnum I might return to good graces with her after chopping out so much of the back lawn earlier in the spring. One can only hope. 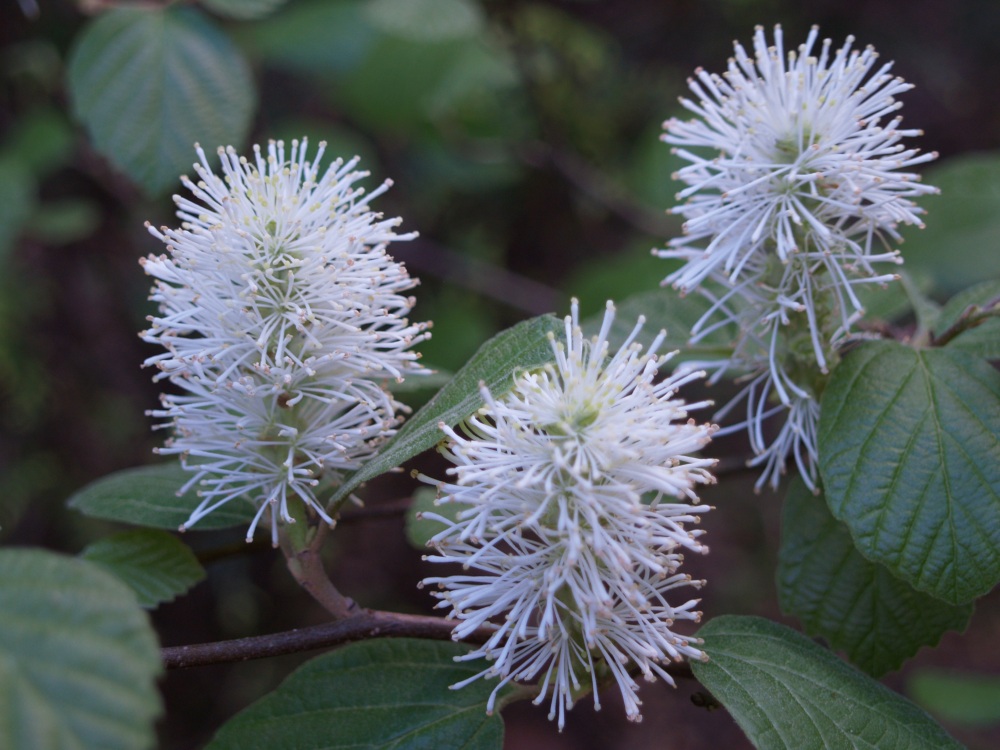 Anyway, on to other blooming shrubs. I am careful to note when Fothergilla (Fothergilla gardenii x major ‘Mount Airy’, above) should be blooming since it is planted along the outside of the north border and cannot be seen from the inside of the garden. There are many plants that are enjoyed by the neighbors, and only on occasion by me when I push my way through the dense plantings. I mowed a narrow strip of lawn along the border years in the past, but much of it is now so shady that grass doesn’t grow, and the neighbor mows the little bit that does. 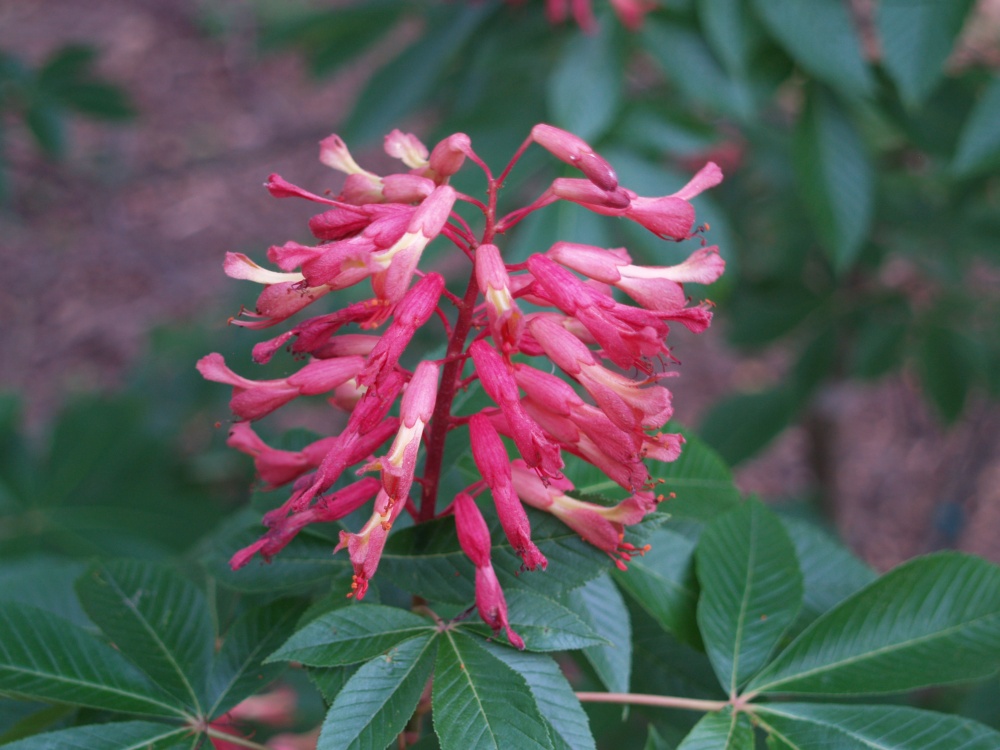 Back to the southern border (which is deeply shaded by mature maples and poplars) there are several shrubs that bloom late in April into May. The flowers of the Red Bottlebrush Buckeye (Aesculus pavia, above) are a little ragged once they have opened, and a day and two prior to opening is when they are best. For years the buckeye was a squat shrub, but in the past two years it has decided to grow more upright. Still, there are enough low branches to enjoy the blooms. 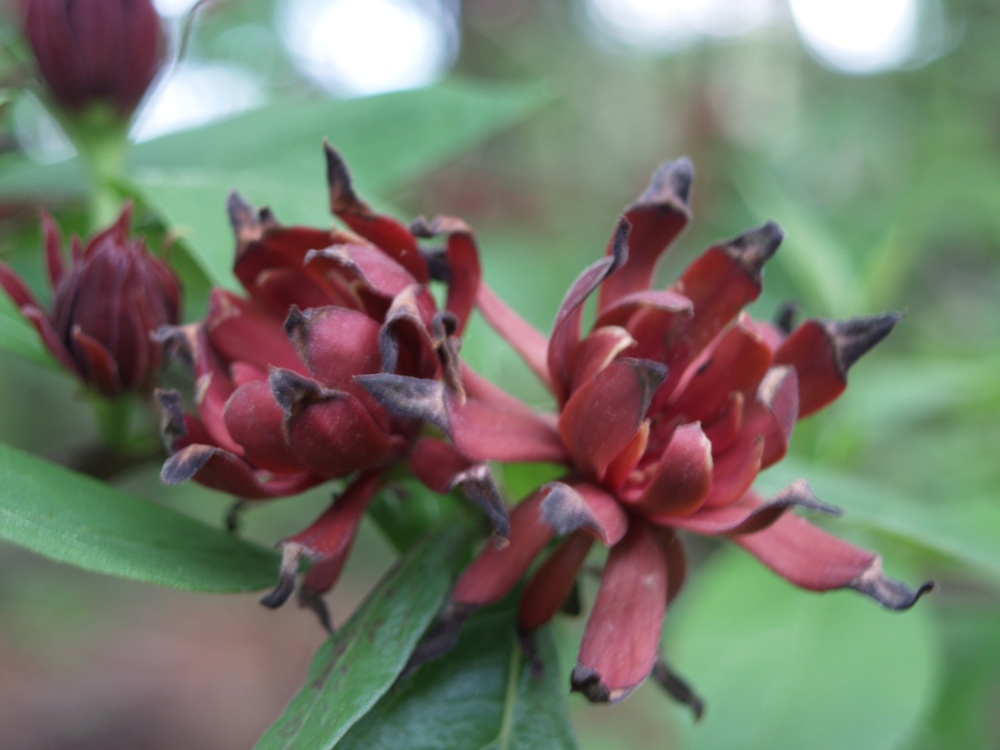 Only a few feet from the buckeye are three native, red flowering sweetshrubs (Calycanthus floridus, above), and a few paces further a yellow flowered selection (C. floridus ‘Athens’, below). I am rarely able to smell even the strongest of scented plants, but on recent evenings the sweetshrubs were quite pleasant. The blooms are an unusual red-brown, and I’m certain they will never gain more popular acceptance except to native plant lovers. 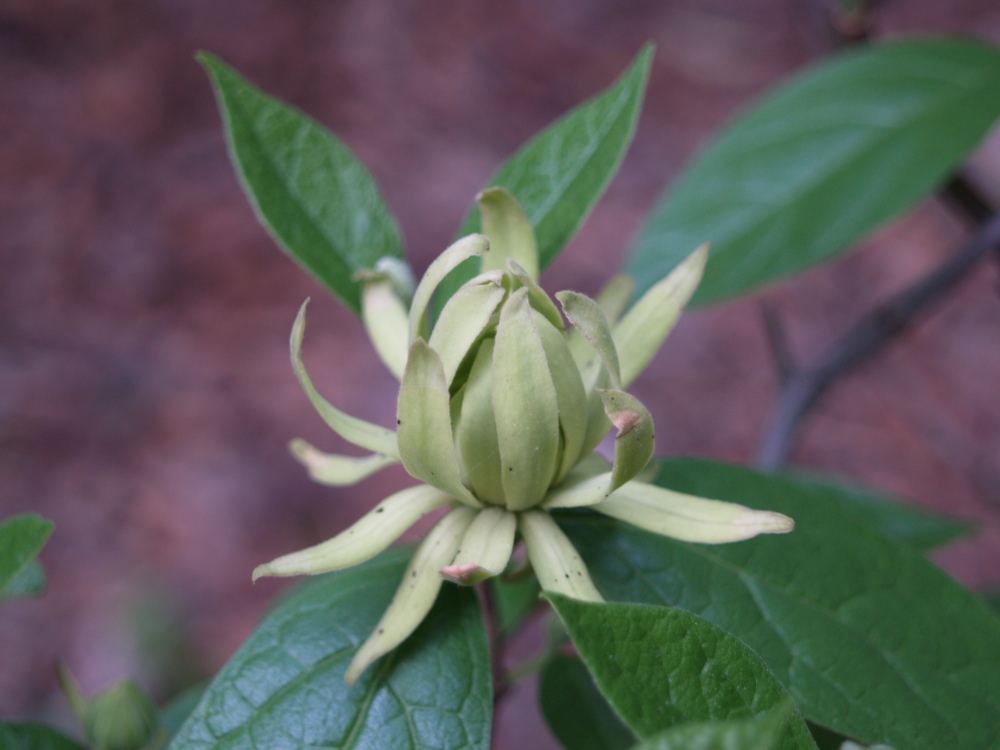 Oops, I promised that I would not drag on so long today, but I see that I have, so I’ll end today without a lot of chatter, but with a photo of the blueberries (below) in bloom. Of course, you know what blueberries do, and in theory each flower will turn to a plump fruit, but I am resigned that the birds will get nearly every berry from the five shrubs that I grow. I could net them to keep the birds out, but I could do a lot of things that I don’t bother to get around to. 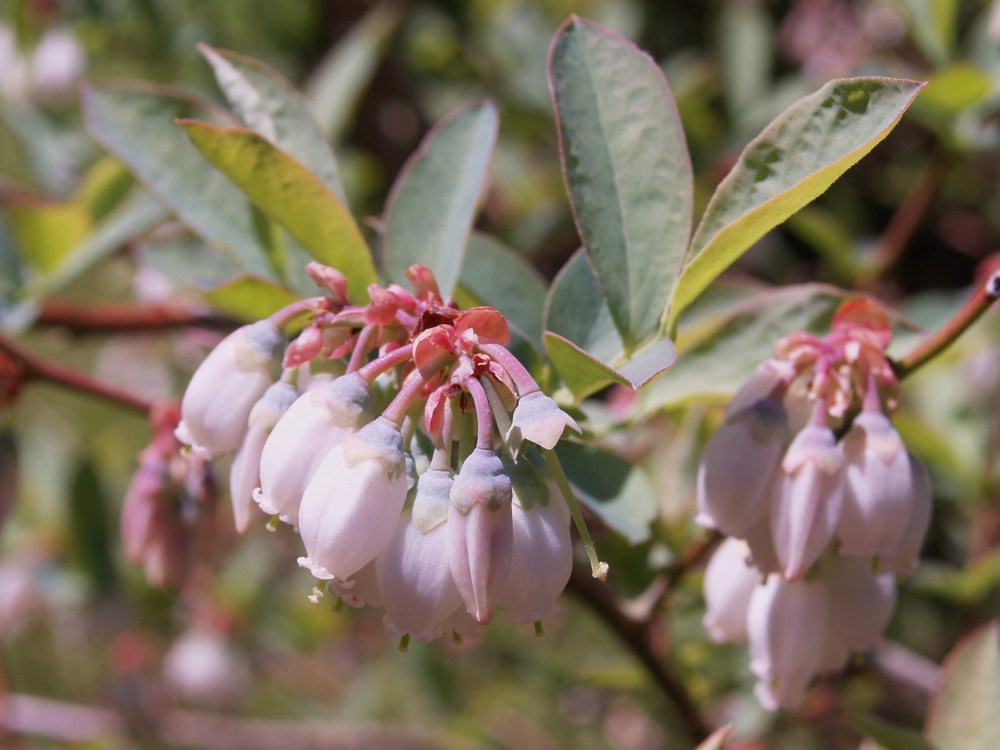