The sudden extreme heat this past week has wreaked havoc with many of the perennials newly planted this spring. I don’t believe that the damage is irreparable, but a campanula and two corydalis are hanging by a thread, and several others are hardly better. All will require close attention through the summer, and I don’t know that I’m up to the task.

Gladiolus dalenii ‘Boone’ (above) was planted only a few inches from a dry stacked stone wall that retains the lower edge of the swimming pond so that the tall flowering stalks will lean against the wall rather than flopping about. One stalk was flat on the ground this morning, while the other leaned against the wall as intended. Oh well, I figured there was only a fifty percent chance that the scheme would be successful. 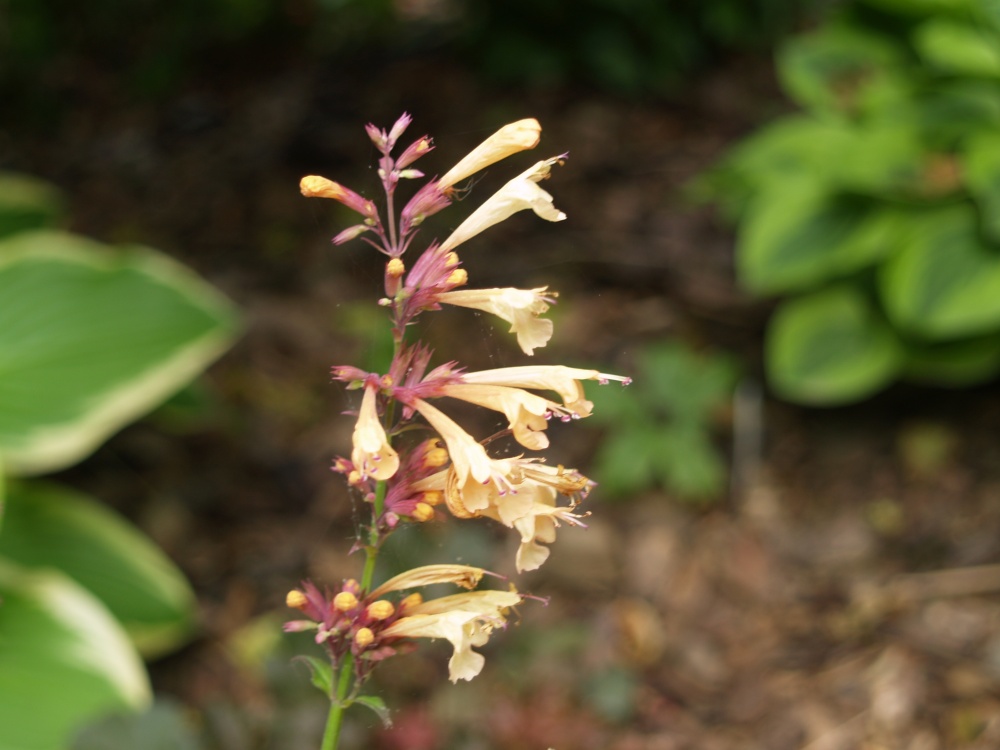 The soil beneath the wall is cool and damp, and so the gladiolus has not been bothered at all by the heat. Agastache ‘Summer Glow’ (above) is planted nearby in considerably drier soil, and it shows some strain, but is blooming and I don’t believe that it will be a concern.

The more established perennials are not noticeably bothered by the early heat, so they go about their business. Predictably, one of the Red Hot Pokers (Kniphofia, above) planted in full sun bloomed a week ago, while another, which is probably the same cultivar (but might not be) is in a shaded spot and is just beginning to bloom. Years ago, a planting of Red Hot Pokers failed when a neighboring evergreen encroached on the clump, but this time I’ve learned my lesson and given them a few more inches.

Other gardeners exclaim that their geraniums are so sturdy that even a brown thumbed gardener could not kill them, but a few years ago I lost a few ‘Rozanne’ geraniums (above). I haven’t a clue why, but fortunately a recent planting has been more successful. Seedlings of ‘Espresso’ geranium pop up everywhere, and perhaps this is the geranium that everyone else declares to be indestructible. While ‘Espresso’ blooms for only a few weeks, ‘Rozanne’ will continue flowering for many months. I prefer the reddish foliage and shrub-like form of ‘Espresso’ to the floppy habit of ‘Rozanne’, but as most gardeners, I prefer the longer period of flowering.

The first of the Asiatic lilies (above) is blooming, and I have no idea what the variety is, but there are a handful in various colors so that there are flowers into early July. Though the stalks grow straight, these are not so tall that they flop about, even when the soil is dry and the wind blows. Each stalk carries three or more blooms, and several of the same color are planted close through a low growing euphorbia so that there is a nice mass of white, yellow or orange, and I don’t recall but probably a red that flowers at the tail end. 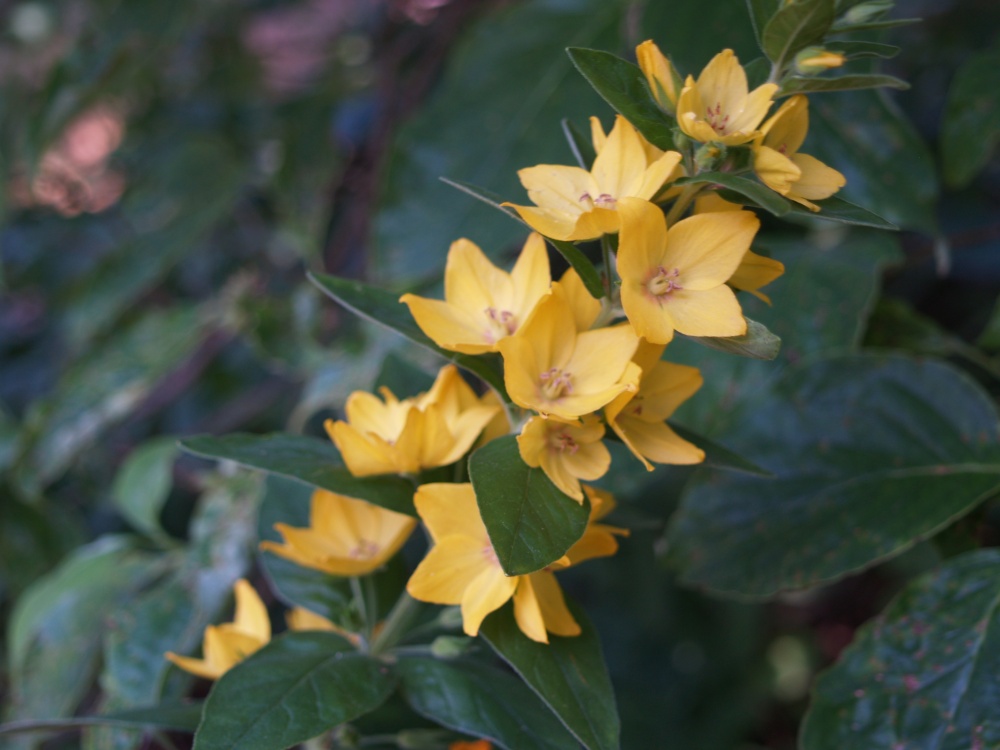 Years ago a variegated lysimachia (above) was planted in the dry shade beneath a native dogwood and in front of a free standing stone wall in the front garden, though it has been a few years since the variegation reverted and now the clump is entirely green. The clump has spread a few feet in each direction, and now it threatens to overtake a yelllow striped yucca in its path. The lysimachia has upright stalks that flop about so that the clump has an unmannerly appearance, and I have considered digging it up for years. But, there it sits, and today the blooms are quite nice. 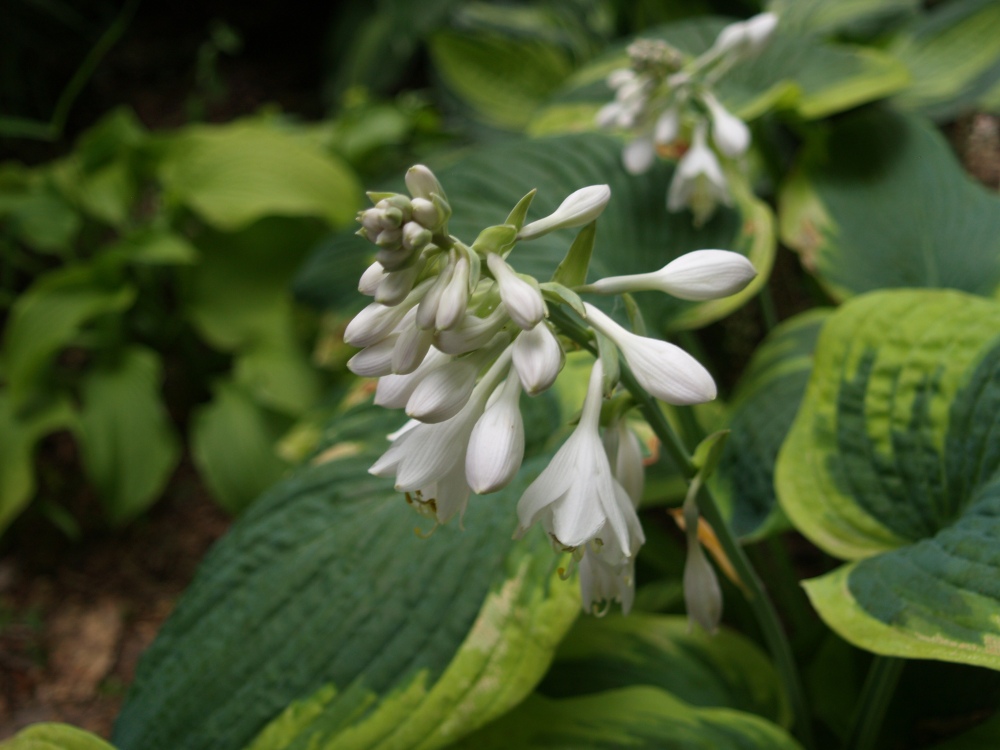 Few people plant hostas for their blooms (above), and I will include myself in that group, but beginning in June there is one hosta or another flowering into September. I prefer ones with short stalks, rather than the tall and awkward types, and by coincidence most hostas in the garden are short ones. The few taller stalks are cut down shortly after blooming while the short ones are ignored.

In some years the hostas are damaged by hail storms or slugs, or by persistent heat and dry weather, but in mid June all have lush foliage that has been unbothered by the recent extreme temperatures.