Late in the spring I noticed that the creeping plumbago (Ceratostigma plumbaginoides, below) was being overtaken by cypress sprurge (Euphorbia cyparissias), a threadleafed euphorbia that is generally identified as weedy, but serves quite nicely as a spreading ground cover in my garden. The plumbago is tolerant of sun or part shade, and of dry conditions, but it does not fare well in competition with more aggressive neighbors, so I expected that it would quickly give up the fight and disappear. 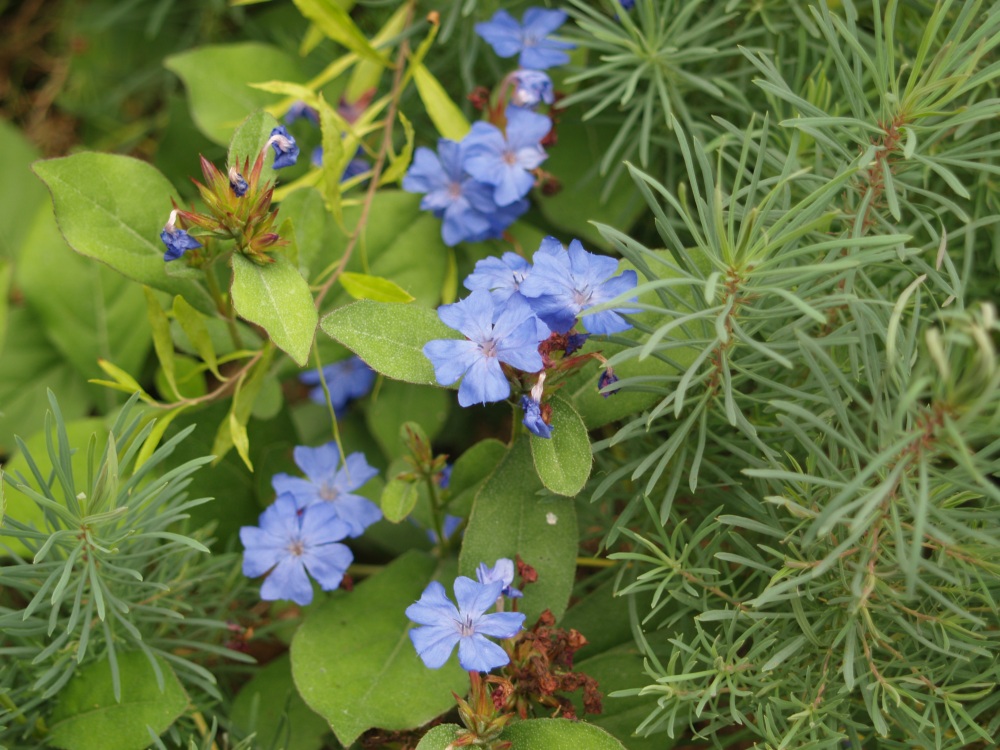 Instead, the plumbago has managed to weave itself into small openings so that it now appears more vigorous than before the spurge invaded. The first blue flowers appeared early in July, and these will persist into early autumn when the foliage turns to a deep red in full sun. In this half shaded location the leaf color will be more mottled, but still delightful. 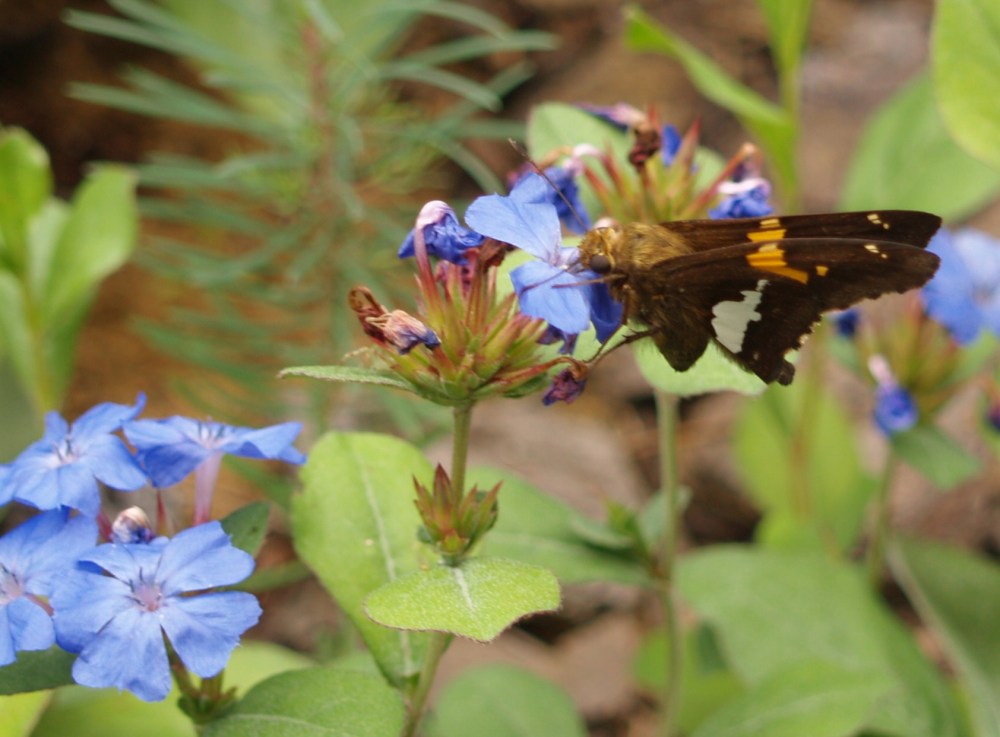 When the foliage of the spurge turns to muted yellow in late September the contrasting hues and textures will be so splendid that I’m certain that I’ll congratulate myself on the superb planning (which, of course, was purely accidental).

At the entrance to the front walk a ‘Seriyu’ Japanese maple planted only a few feet off the corner of the house has spread to cover the bluestone path so that visitors walk under branches to reach the front door. A year ago a dwarf Scott’s pine gave up the fight after a long battle with the encroaching shade of the maple. I stripped the dead branches of needles to use for mulch, and cut the pine off at the base, leaving a gaping hole in front of a curving dry stacked fieldstone wall that had not been evident from the walkway in more than a decade.

My wife was adamant that the view of the wall not be blocked again, and of course her thoughts were well considered, except that I had planted a columnar plum yew (Cephalotaxus harringtonia ‘Fastigiata’) and two gold leafed aralias (Aralia cordata ‘Sun King’, above) a week earlier. I briefly contemplated transplanting the aralias to avoid the inevitable “I told you so” that would follow when the wall could no longer be seen behind the shrub-like perennials, but I could think of nowhere else to plant them, so there they stayed.

The gold leafed aralias have worked beautifully in this deeply shaded location, appearing from a distance to be a shrub in spectacular yellow bloom. A small portion of one of the plants is exposed to the late afternoon sun so that a few leaves have scorched, but this scheme has developed far better than I had imagined, and my wife has yet to mention the partially obscured wall. 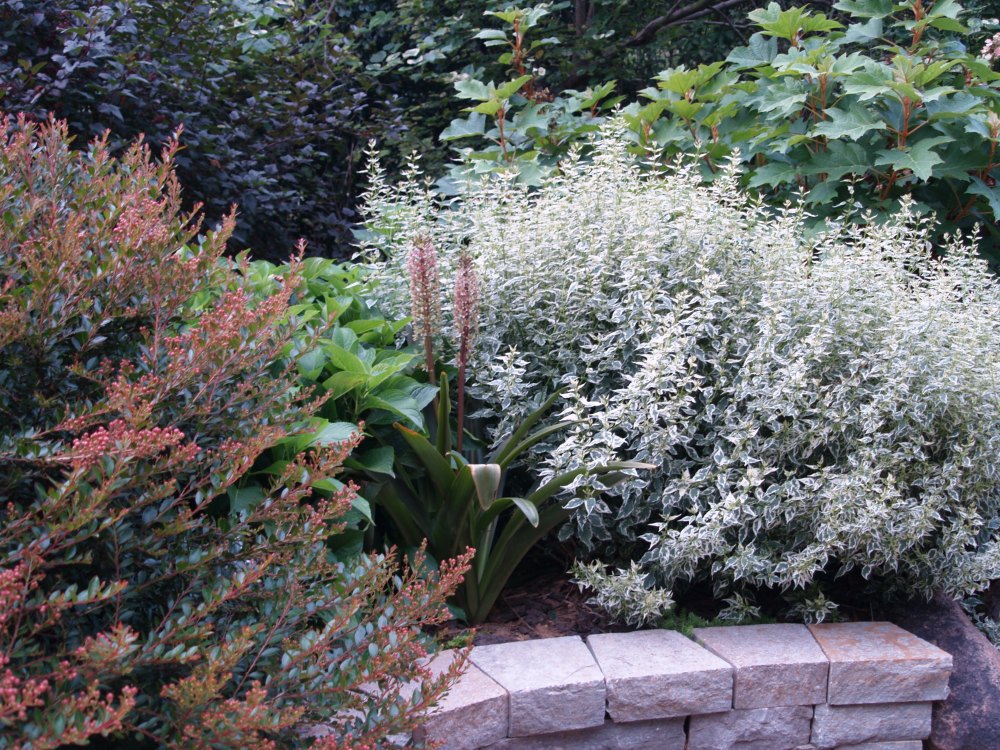 When the large swimming pond was constructed in the rear garden an adjacent stone patio and fire pit were added, and a low wall of cut stones and granite boulders was built to retain the gradual slope. A curved, cut limestone seating wall mirrored the curve of the circular fire pit, and above this were planted dwarf crapemyrtle (Lagerstroemia ‘Cherry Dazzle’), hydrangeas (H. macrophylla and H. quercifolia), and a variegated caryopteris (C. divaricata ‘Snow Fairy’, above). Only a few years later the shrubs have grown so that there is no space for sitting, but a small opening between shrubs afforded the opportunity to plant a burgundy leafed pineapple lily (Eucomis comosa ‘Sparkling Burgundy’, below).

Though my garden planning is seldom more sophisticated than “there’s a hole, what can I fill it with?”, in this instance I considered how marvelous the burgundy, strap-like foliage would contrast with the green and white variegated leaves of the caryopteris. Indeed, the combination has been splendid, but the caryopertis requires constant pruning to keep it from overwhelming the lily, and the exceptional pineapple-like blooms do not stand out in front of the variegated foliage.

When offsets grew on the pineapple lily I moved half of the clump to a spot where it is more readily appreciated, and next year I am likely to move the remaining clump. There is an excellent chance that the resulting “accident” will work beautifully.