Several of the crapemyrtles in the garden have become more shaded by taller neighbors through the years so that they begin to flower several weeks later than in nearby sunny gardens. This year there were only a few scattered blooms on Natchez in late June, and the normally later flowering Sioux began to bloom only a few days later. By whatever peculiarity (but likely due to the abnormally wet and cloudy weather since the middle of August), Sioux remains in bloom in early October, the latest that I can recall. If we suppose that the start of July was the first significant bloom, Sioux will have been flowering for ninety days, and counting. Perhaps, this is not unusual for deeper in the south, but in northwestern Virginia I don’t recall a longer blooming season.

A number of perennial geraniums flower over long periods, but of the handful in my garden ‘Rozanne’ (below) blooms from late May until a hard frost in October. I’ve had some problems establishing ‘Rozanne’ in the garden in past years, but in an area with consistently moist soil it has grown splendidly for the past few years. It bloomed through summer without any evidence of heat related decline, and only with repeated night time temperatures in the low forties has it slowed down.

Other perennials will rebloom if deadheaded, but I am either traveling or too lazy for much summer garden work, so I cut perennials back only occasionally. I’ve found that hummingbird mints are the most dependable reblooming perennials without any care at all.

Older stems of ‘Blue Fortune’ (Agastache ‘Blue Fortune’, above) are covered with spent blooms, and though most stems remain stiffly upright, some arch after the recent heavy rains. Abundant new flowering stems are not as tall, but bees have no trouble finding them, and this hummingbird mint has been in constant bloom since at least June.

The reblooming hydrangeas displayed a few more flowers this summer than the one before, despite the few weeks when temperatures averaged nearly one hundred degrees. Last year the heat was more prolonged, and I’ve seen that hydrangeas produce fewer buds in the heat (and dryness) of summer. With cooler temperatures and abundant rainfall the shrubs are covered with buds, though many of these will not develop into flowers before the first frost.

I’ve found that the best reblooming hydrangeas are Penny Mac (above) and Endless Summer, both of which are blue in the acidic clay soil of my garden. The more compact growing Mini Penny does not have a single bud, nor do the white Blushing Bride and lacecap Twist N’Shout. Perhaps these would flower again if they were cut back after blooming, but Penny Mac and Endless Summer flower through the summer and early autumn without any attention on my part. 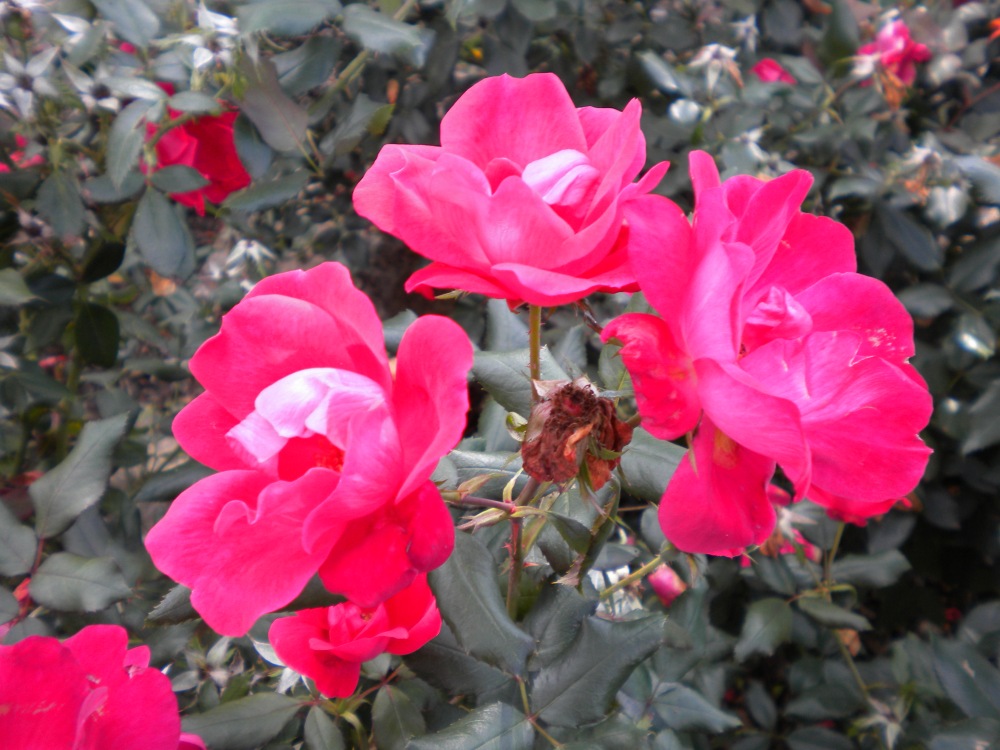 Over the past several years I have planted a number of shrub and ground cover roses, all the low care, reblooming sorts that have become so popular. Knockout roses (Knockout Red, above) are most commonly known, and these continue to perform well without requiring treatments for fungus or insects. They flower intermittently from May into November in this area, and though the rebloom is not as heavy as the first of the season, there is rarely a period when these roses aren’t showing some color.

In my garden the pink Knockout flowers over a longer period, and with more abundant blooms than any of the others, but I prefer the cherry red to the light pink and the darker foliage of the red is more attractive.

If temperatures don’t dip too low the reblooming Boomerang lilac (Syringa x ‘Boomerang’) will flower for the last time this year in mid October. The lilac requires pruning to set new buds, and as a newly planted small shrub I’ve been able to keep up. I expect that as it grows larger I’ll fall behind, and in a few years I’m likely to be disappointed that it is just another lilac without deadheading.

In this garden the rebloomers are greatly appreciated for their consistent color, and a few are appropriate for a garden of any size. But, flowers that last for a month, a week, or even for only a few days to interrupt the day after day sameness should not be ignored, and the garden is not complete without some of each.