There’s no worklist (written or mental). No plans. I might do something in the garden this winter, I might not. It depends. Is there something else to do? Anything? My wife volunteers that she can prepare a list of indoor projects in a heartbeat, but she knows it would be a waste of her time.

There’s plenty of garden chores that could be accomplished, and as the winter wears on I’m likely to get the itch to get started. One morning in February I’ll roll out of bed to a glorious, sunny day, and I’ll decide that today is an excellent time to get started cutting down the grasses and spent perennials. Or maybe not. These must be chopped back before new growth starts, but that’s almost two months off, so there’s no rush.

And there are leaves, lots of leaves that were not cleaned up in the late autumn. The paths were cleared, the patios and most of the lawn, but the large bed areas along the forest’s edge that borders the garden have barely been touched. By late in the winter the leaves will be damp and matted, and it would have been much easier to have cleaned up and shredded them while they were dry. But, I didn’t.

It’s not that I didn’t try, but there are lots of trees in the garden, and a bunch more beside the garden. From lots of trees you get lots (and lots!) of leaves. I’ve never finished this task before the new year, and I don’t expect I ever will. And it really doesn’t matter, except that the labor is more difficult when the leaves are wet.

There has been negligible snow thus far, and I won’t be disappointed if it doesn’t amount to anything this winter. The past two years the damage from wet, heavy snow has been substantial, and I’ll be overjoyed to escape without having to repair broken and bent branches. 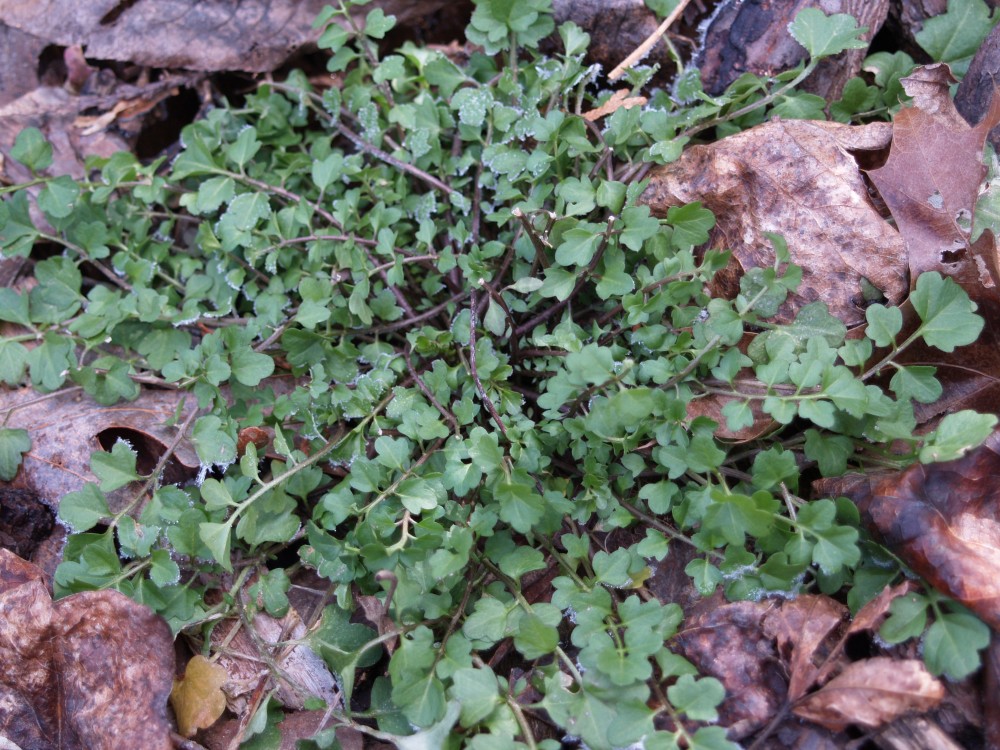 When I walk through the garden in January I see that winter weeds have invaded open spots between shrubs and by bed edges. They were here last year, and I didn’t remove them before they went to seed, so they’re back. And they’ll be back next year. Most of these are cute little ground covers with lush green leaves, and only from experience does the gardener know that it is best to pull them before they go to seed. If they’re not removed, they multiply. Today, there are no seeds, but they’ll be here sooner than later.

Occasionally, I’ll pull a few weeds as I stroll through the garden on a winter afternoon checking the status of the buds of witch hazels and hellebores. But only a few, and not enough to qualify as having accomplished anything. Eventually these winter weeds will be dug out (probably after they’ve seeded), though it’s likely I won’t get around to removing all of them. They usually fade in the first heat of spring, but the seeds have scattered about to germinate next autumn.

So, if I haven’t gotten around to pulling the weeds before they go to seed, the effort is largely wasted, and I probably would have been better off rolling over and going back to sleep.