What’s going on here? In all my years ….. I’ve never seen azaleas flowering in March in my garden, or in early April for that matter. But, today there are scattered blooms on a handful of azaleas, and swollen buds on the others.

Autumn Amethyst (above) is prone to flowering a month or more after other Encore azaleas have quit when there are mild temperatures in late autumn. With a warm November this past year there were flowers through the month and even a few scattered blooms remaining in early December. In the spring Autumn Amethyst usually begins flowering late in April, or even the first week of May, but it’s apparent that it jumps at every temperature swing, and after three weeks of warm temperatures in March it is now in full bloom.

For the first time in my garden there are flowers on the purple loropetalum (Loropetalum chinensis ‘Shang-hi’, ‘Purple Diamond’ (TM), above). I planted it as a cold hardiness trial several years ago, and while it has struggled a bit, it has survived and shows signs that it will settle in for the long term. I’m not ready to proclaim that ‘Purple Diamond’ will flower every spring. I suppose that it blooms dependably in South Carolina, and when northwestern Virginia experiences another winter similar to the norm for the Carolinas, then I’ll expect to see flowers again. The more cold hardy, green leafed ‘Emerald Snow’ is also flowering (below), but it blooms intermittently through the summer so this isn’t too big a surprise.

For one reason or another, a year ago I missed the peak flowering of Fothergilla (Fothergilla gardenii, below) completely. The tall shrub is planted on the far side of the border planting so that it faces the wall of my neighbor’s house, and in early spring there’s not anything else flowering in the vicinity, so I seldom venture in that direction. Whatever made me wander past a few days ago, I’m grateful to have caught it just before its peak bloom.  There are compact growing cultivars (such as ‘Mt. Airy’) that are more suitable for civilized gardens than my eight foot tall fothergilla, but this one suits my barely managed garden quite nicely. 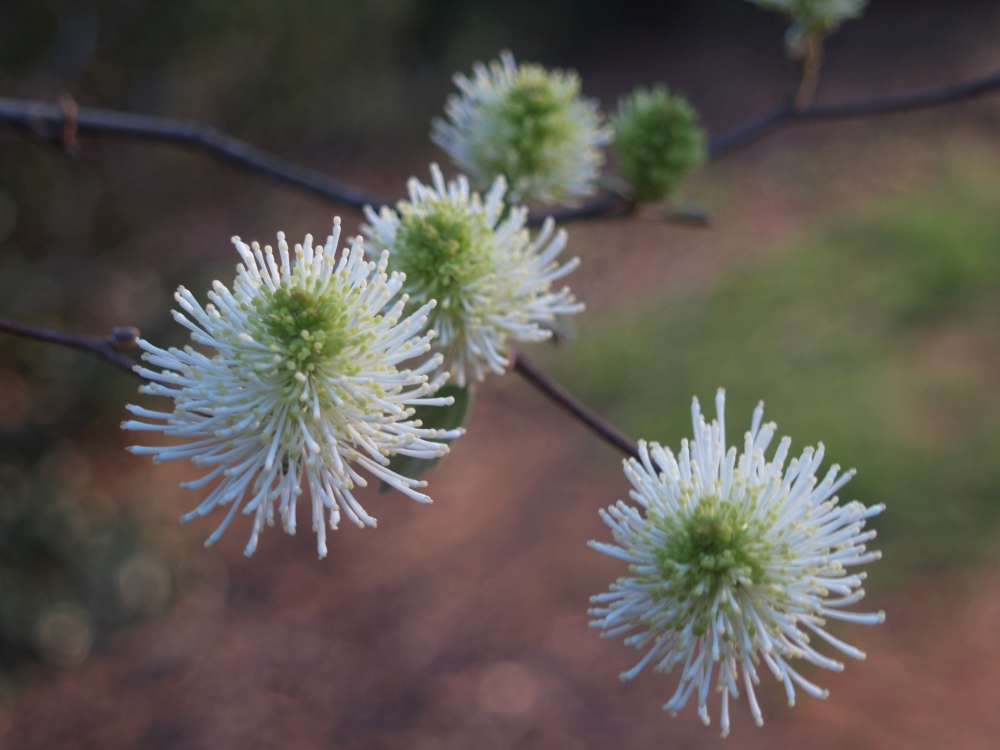 I think that I might have outlasted my wife. Against the southern wall of our house is a Chinese snowball viburnum (Viburnum macrocephalum sterile, below) that has grown far too large for its setting so that it obstructs the view from the windows of our small library. It would not be so much of a problem but my wife often reads in this room, and squirrels catch her eye as they scramble through the branches and vault into a hidden crevice into our attic. This annoys her considerably, and I’ve vowed to cut the shrub down to half its size for each of the past three years. But, I haven’t heard a peep from her about it this spring. I can only hope.

The blooms of this snowball viburnum are similar to any number of plants that are identified as snowball this or that. They’re huge and rounded, and they persist long after the color has faded. The shrub is big and loosely branched, but in early April each branch is tipped by a green flower or two that will turn to white in another week or ten days. The sight of a ten foot tall shrub with hundreds of grapefruit sized white (or green) flowers is quite impressive, though the blooms are not fragrant. This is a wonderful shrub for the back of the border, but probably not the best choice to plant in front of the windows of the library unless you have plans to do some regular pruning to maintain a more modest size. I do not.