It seems only a few years ago evergreen azaleas were the plant of choice in American gardens, but today they’ve been pushed aside to make room for compact growing shrubs with colorful foliage, long blooming roses, and perennials. I once had dozens of azaleas in my garden, but poorly drained clay soil and lacebug infestations got the better of most of them, and the number tickled down to a scattered few Delaware Valley Whites (below). 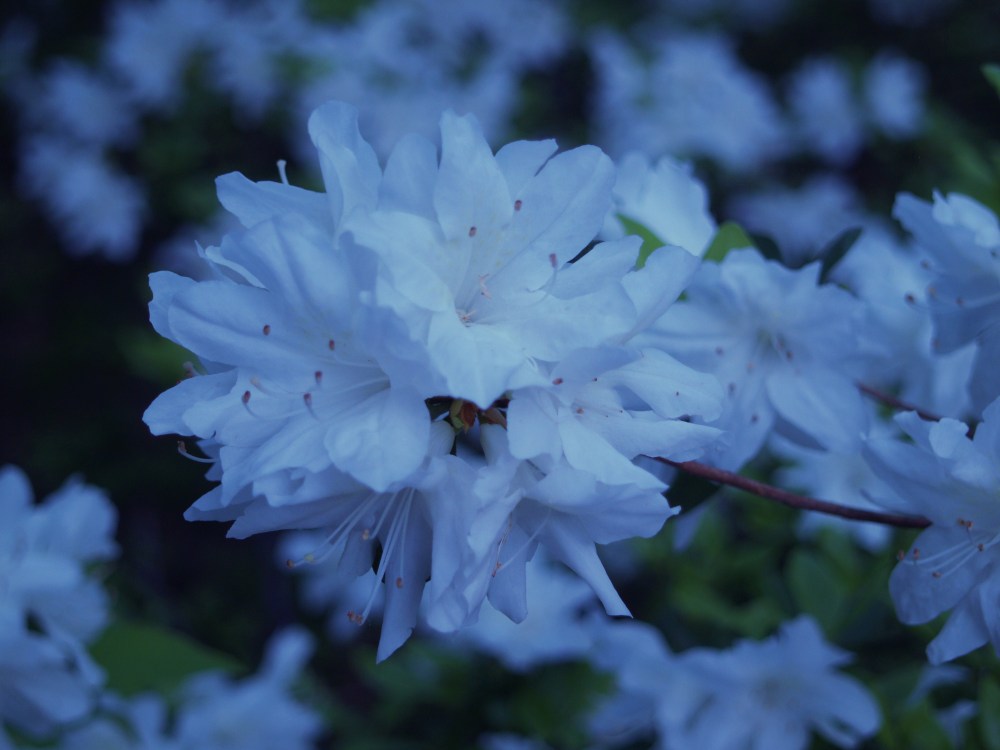 In recent years I began to test Encore azaleas that flowered in spring and late summer, so I’ve added a few dozen azaleas back into the garden. Not all Encores performed to my expectations so I culled the number down to eight or ten good varieties that flower in late April into early May, and then again September into October. Further south the other Encore azaleas perform well, but nearer the northern edge of their cold hardiness I’ve found that only select varieties flower dependably in the shorter growing season. To my surprise, I’ve also found that the Encores are more resistant to lacebugs so that I rarely notice them at all (though they’re not far away on the pieris a few feet away).

Early trials with Encore azaleas were lackluster, until I was advised to plant them in more sun and less shade. I’m quite certain that many azaleas are sacrificed each year to the mistaken belief  that they will thrive planted beneath trees, but Encores perform substantially better in my garden in nearly full sun. In a half day sun established plants flower acceptably, but in less sun the blooms are scattered. Azaleas dislike being planted with root competition from maples and poplars, or in compacted clay soils, and they will quickly fail without adequate moisture.

Twenty years ago I planted several deciduous Exbury azaleas in the mixed tree and shrub planting that borders the garden, and for a number of years they grew nicely enough, I suppose, but I paid little attention to them. One evening while pulling weeds, or attending to some minor catastrophe or another, I noticed a strongly sweet fragrance and followed my nose to see the six foot tall shrubs with stems cloaked in brilliant red blooms arching from under a redbud. I took notice, and then a week later the neighboring azalea burst into similarly fragrant yellow flowers. Now, both azaleas tower to nine or ten feet in the dappled shade, and I’ve become so enamored of them that I’ve carved out a bit more space from neighboring shrubs.

The Exbury azaleas usually flower a week earlier than the evergreens, though everything is so confused with the odd weather through the winter and early spring that they have bloomed concurrently this year. The brightly colored flowers cover the leafless stems, so that at the edge of a wooded border the azaleas make quite a show. I’ve planted several more Exbury and other deciduous azaleas along the wooded border of the garden with varying degrees of success so that it’s clear that they also prefer a bit more sun than shade, and they grow reluctantly under shallow rooted maples. 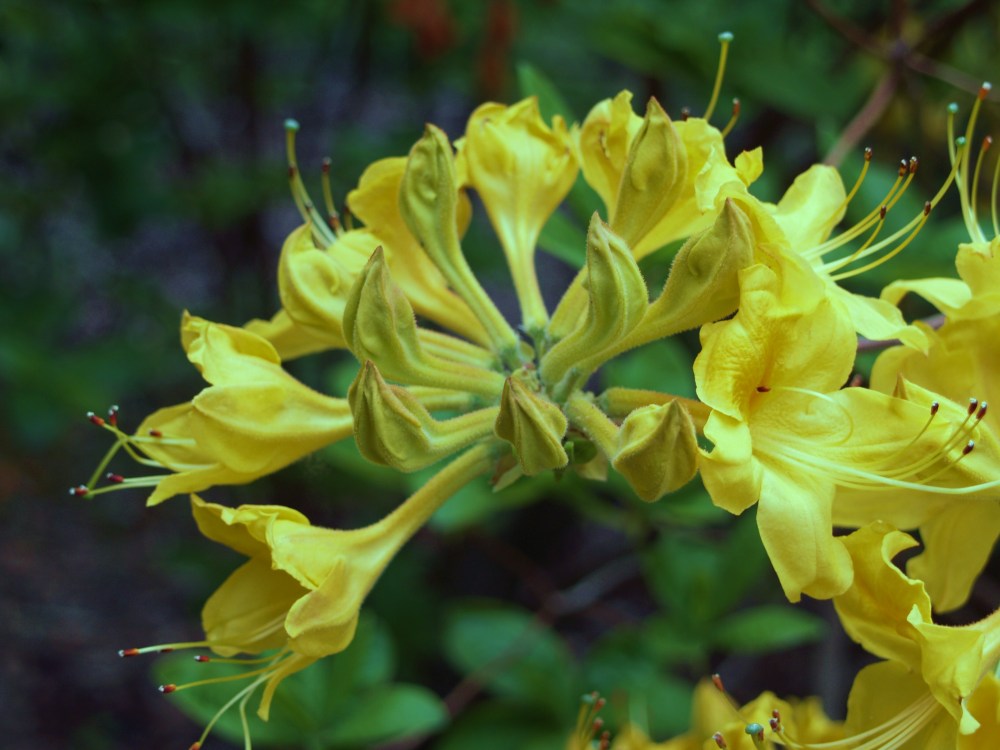 The carefree deciduous azaleas grow with a more open habit than the evergreens, and in deeper shade their branching is even more wide spreading. In the wooded setting I prefer the deciduous types, and don’t mind at all that they are bare through the winter. The foliage of Exbury azaleas is pleasant after flowering, though unremarkable, and they are scarcely noticed while the Encores are flowering in September and October. 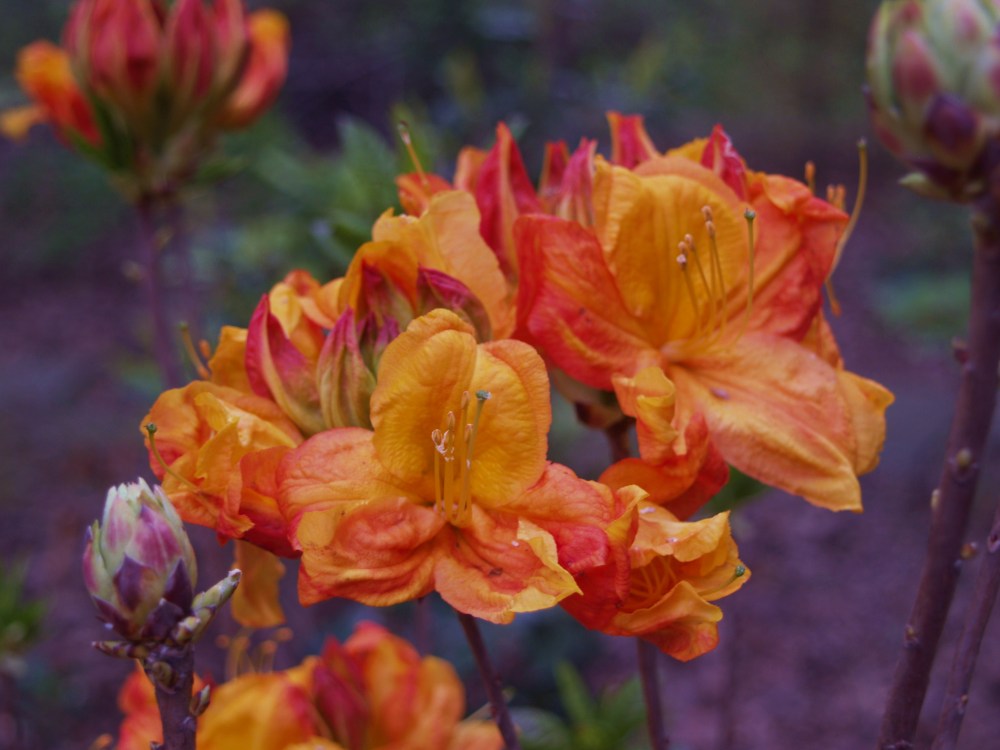 I will admit that until ten years ago I had lost my enthusiasm for azaleas, but Encores, Exbury’s, and other deciduous azaleas have rekindled my affection for these traditional garden staples.