Soon after the gardener is seduced by dazzling blooms to plant columbines (Aquilegia canadensis, below) a few dozen seedlings arrive, followed next year by several dozen. The seedlings are not bothersome, and if there are too many (or they are unwanted in a more orderly garden), the tiny seedlings are easily brushed away. If too little attention is paid and the seedlings grow to small plants, they are still uprooted without any trouble. 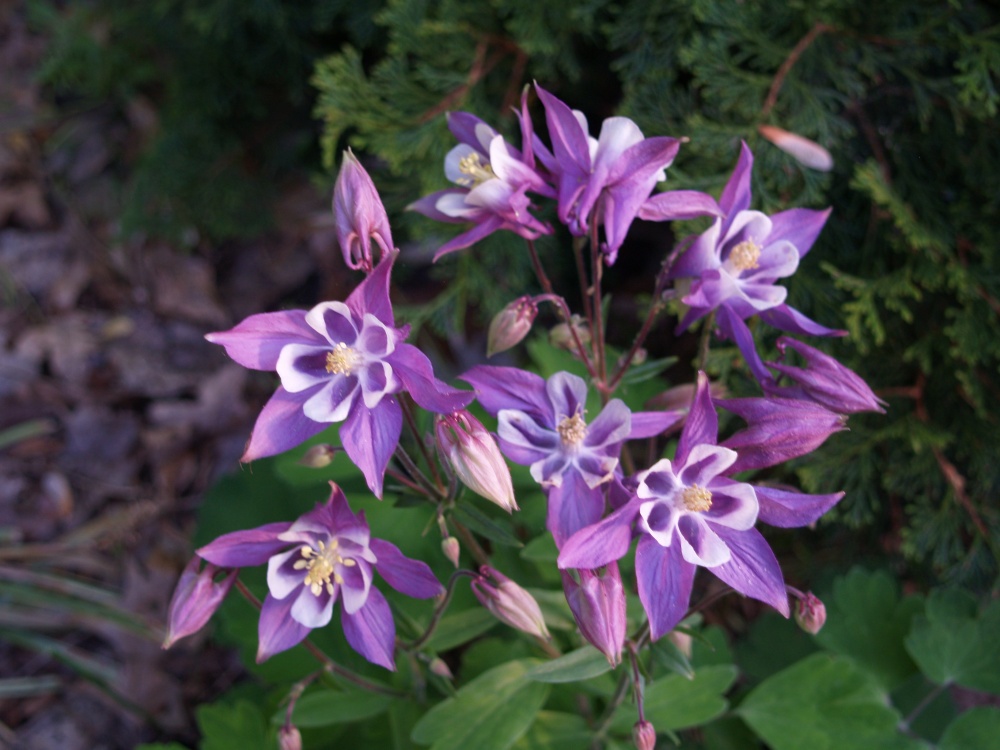 While young, the seedling foliage is somewhat similar to clover, and in my untidy garden beds clover commingles with columbine so that an equal number are uprooted and left behind when I’m weeding. Several weeks later columbine and clover are more easily identified, so the weed can be pulled and discarded. But also, many columbines are plucked and tossed as they sprout in every direction on every slightly sunny spot of open ground, in gravel, and between large path stones. 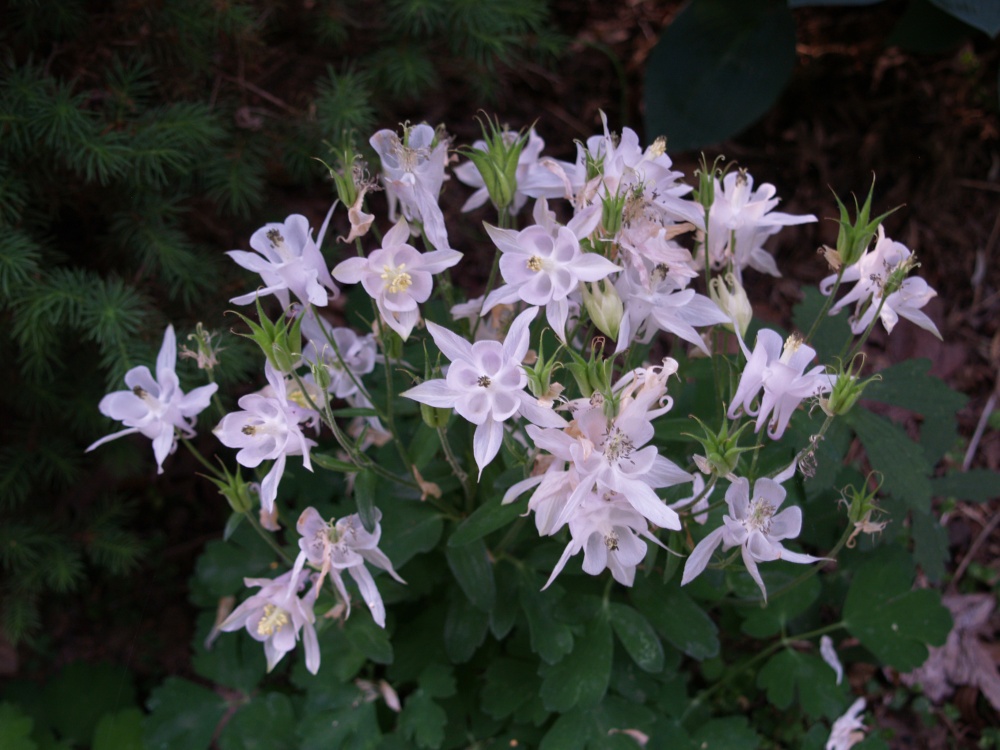 There can, indeed, be too much of a good thing, but after the seedlings are excised, the gardener is still satisfied that two plants of this marvelous native have become twelve. All are healthy and vigorous, and when they flower the following spring the gardener is taught a small lesson in breeding and plant genetics. No two flowers and plants are the same, nor the same as the parent plants, though a few few might be close in appearance. I’ve lost track now of which of the columbines are the original plants, but I’m certain that the awkwardly tall, light blue flowered one (below) is not. It stays, not because it is particularly attractive, but because the flowers are big and it’s different. That’s a pretty low standard, but with columbines if I change my mind tomorrow another will quickly grow in its place. 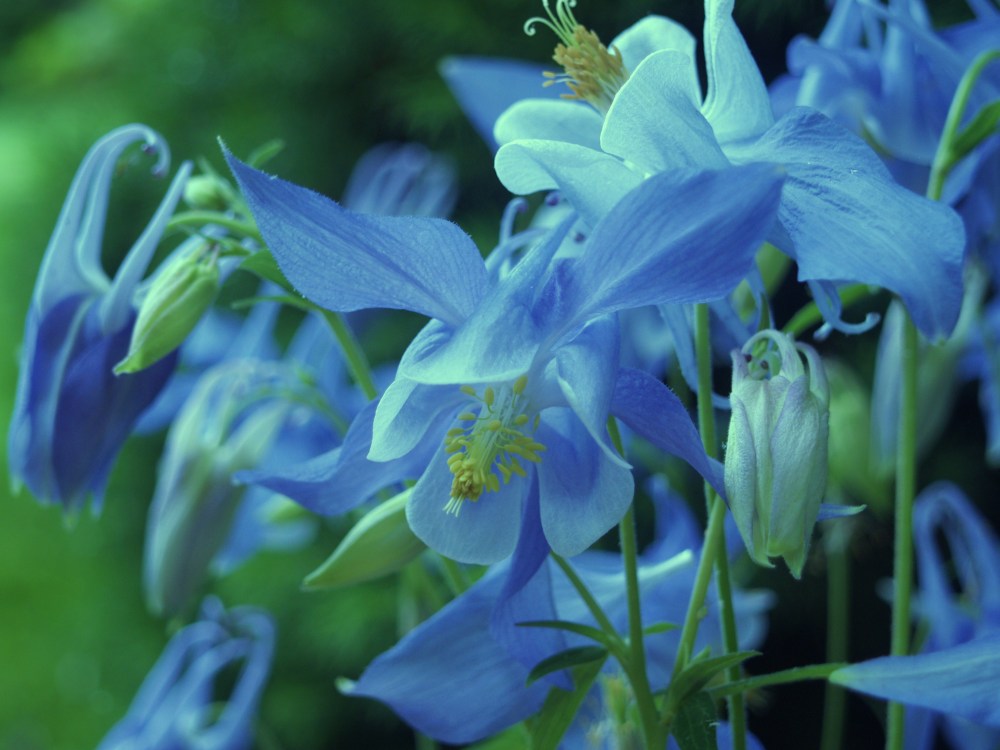 I planted the native Mountain mint (Pycnanthemum virginianum, below) several years ago, and after the first winter it spread moderately. This spring moderation has been cast to the wind. It has spread vigorously from rhizomes to quadruple in size so that I had to rescue a slightly less aggressive agastache that was in jeopardy of being overwhelmed. By good fortune the mint was planted with plenty of space (except for the agastache), and in slightly damp ground it has taken full advantage.

I can see that spreading this readily might be a problem in some gardens, but in this spot it will be more of a good thing. The foliage of Mountain mint is pleasingly fragrant when handled, and I don’t expect that it will be nearly as aggressive as the mint that I have growing in a nearby drainage depression. When it flowers later in the summer the bees will be overjoyed, and the blooms hang around for months so I’ll be quite pleased also.

I have planted a number of perennial geraniums through the years, with spotty success at best. For other gardeners ‘Rozanne’ (above) is a staple, but after my third or fourth effort I’ve given up on it. I’ve killed it again, despite my best effort to plant in moist soil (where it is warned it can be too vigorous) and just enough sun. ‘Rozanne’ lived for a few years, and I was almost convinced that it would be a permanent part of the garden, but this spring it has disappeared. I suppose that it could have been too wet in late summer last year when much of the lower garden was saturated by repeated heavy rains, but everything else lived. In fact, I was never overly impressed by ‘Rozanne’, though its flowers are splendid and it blooms over a longer period than other geraniums.

I much prefer ‘Espresso’ (above), which blooms for only weeks, but is much more vigorous and foolproof. Where growth of ‘Rozanne’ and ‘Johnson Blue’ is sprawling and sparse, ‘Espresso’ has substance, a full, low growing dome of burgundy-green foliage. It also seeds itself about, with seedlings being nearly identical to the parent plant. From one plant, ‘Espresso’ has multiplied to a dozen, though numerous tiny seedlings have been weeded out. It is an exceptionally well mannered plant, and unwanted seedlings are easily eliminated, while keepers quickly grow into a nice mound of foliage that complements its neighbors.