Two clematis wind their way through the nandina (Nandina dometica) so that in May the tall heavenly bamboo is shrouded in white from ‘Henryi’ and later by the purple ‘Jackmanii’. When the flowers fade the only evidence of the two vines is the clematis’ sparse foliage, and the nandina suffers no injury at all.

I’ve tried to plant clematis for similar effect through the branches of viburnums and the multi trunked Seven Son Tree, and each time the vine languishes without enough moisture, or sun, or cool roots, or whatever it is that makes clematis grow with vigor. At the base of the eight foot tall nandina the roots are shaded, yet the foliage is fully in the afternoon sun. I favor the large, pure white ‘Henryi’ to the purple (‘Jackmanii’, below), but also instead of all other fashions of clematis, though all are splendid.

On the far side of the deck Clematis montana rubens (below) is planted so that it climbs the lattice and railing. It is much too vigorous to plant through a shrub, and a second plant nearby has jumped from its support to climb into a Japanese maple, where it is a constant bother. 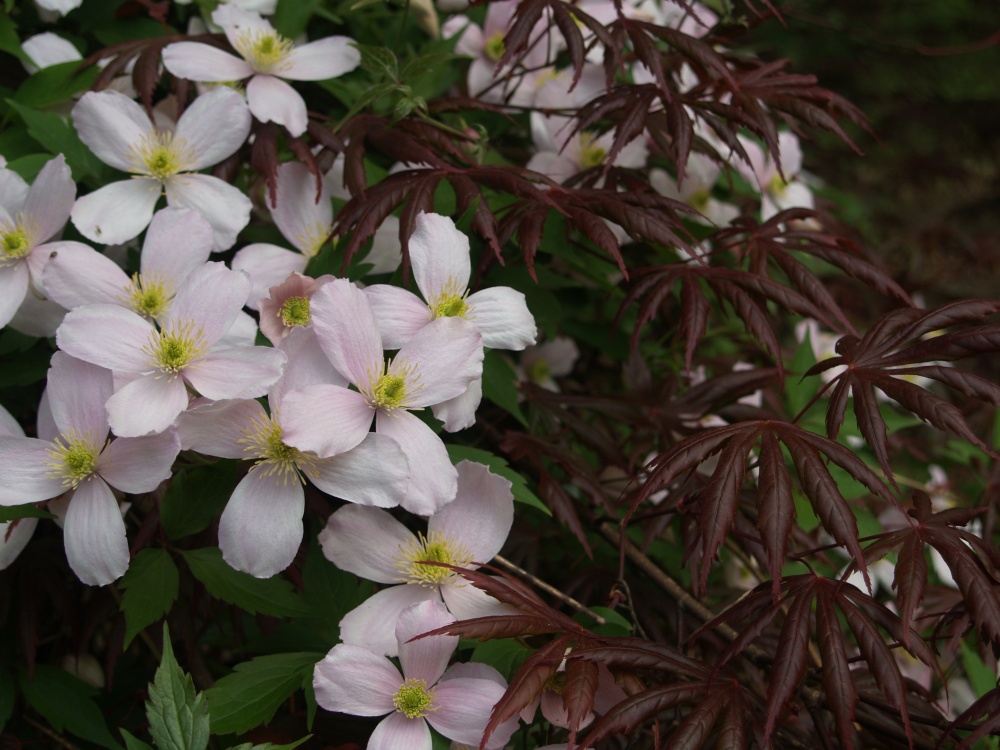 In this spot by the deck I planted Chocolate vine (Akebia quinata) years ago, and within a few years I was desperate to chop it out so the deck and neighboring plants weren’t overwhelmed. Rubens clematis is only slightly less aggressive, but for most of the year I’m able to manage. It flowers for several weeks at the end of April into May, and if the gardener has been discouraged by Chocolate vines or wisteria, Rubens is likely to be a happier choice to cover a trellis or lattice.

Most clematis lack the vigor to quickly cover a trellis, but to wind through a shrub they are ideal. The sweet autumn clematis (Clematis paniculata, above)  is even more vigorous than montana rubens, and care should be taken in planting so that it can be regularly pruned. I’ve allowed one planted by my driveway to escape the wrought iron fence that it was supposed to cover, and now it has wandered far up into a thread branch cypress.

The matter could be settled with relative ease by lopping the clematis off at the point it strays from the fence, and I’ve pledged to take care of this minor task for three or four years. By early autumn my failing is rewarded with a thick blanket of fragrant white blooms covering the top branches of the cypress, and the cypress doesn’t seem to mind, so the clematis will remain a while longer.