My wife was in New Orleans over the weekend to visit an old friend. I was invited, but of course she and her buddy were just being polite, and didn’t really want me intruding on their time to visit.

New Orleans isn’t my kind of town, but it has some great gardens in public spaces and I sent along my pocket camera in case my wife was motivated to take a few photos for me. She tried, but couldn’t figure how to change from video to still photos, so we’re stuck for today looking at photos from my less than exotic Virginia garden. Louisiana is nearly at  the end of its spring, almost into summer, but in Virginia it’s only slightly past spring’s peak. After an early start with warm winter and early spring temperatures, the garden has slipped back into a somewhat normal timeline, and plants are flowering just about when they’re expected to.

Earlier this spring I planted a few handfuls of marsh (Dactylorhiza fuchsii, above) and ground orchids (Bletilla striata, below), and both are flowering. A visitor to the garden in late May would figure that there’s not one bit of space open to jam another plant into, but the orchids are low growing and quite small (though it is hoped they will spread), so they fit almost anywhere with a bit of sun.

I was very pleased at the start of the weekend when I saw the emerging bloom of the spotted marsh orchid, but when I returned the following morning the flower’s stem had been severed cleanly and the blooms were laying on the ground. Rascally rabbits! The ground orchids began to flower a few days later, and these will bloom for weeks, and perhaps months if all goes well. The flowers of the cold hardy orchids are quite small, so the gardener will be disappointed if he is expecting flowers as large as the ones that brighten the kitchen counter through the winter. I am not displeased, though I’d be happier if the rabbits would stay away.

The sturdy and trouble free blue stars (Amsonia hubrichtii, above, and Amsonia x ‘Blue Ice’, below) are passing slightly past peak bloom now. Though the hybrid ‘Blue Ice’ flowers considerably longer, the foliage  of the midwest native turns to a softly glowing yellow in the autumn. I grow both, but prefer the native variety, which makes an excellent foliage filler, and works especially well in dry, neglected soils.

Equally tough as blue star is False Indigo (Baptisia australis, below). Baptisia flowers fade quickly once peak bloom has arrived, but the flowers are colorful for several weeks up till the peak. The foliage of false indigo is a pleasant blue-green, and even in miserably poor, dry soil it remains lush and vigorous through the heat of summer. I’ve read that the roots of baptisia do not like to be disturbed, so they should planted where they will stay. 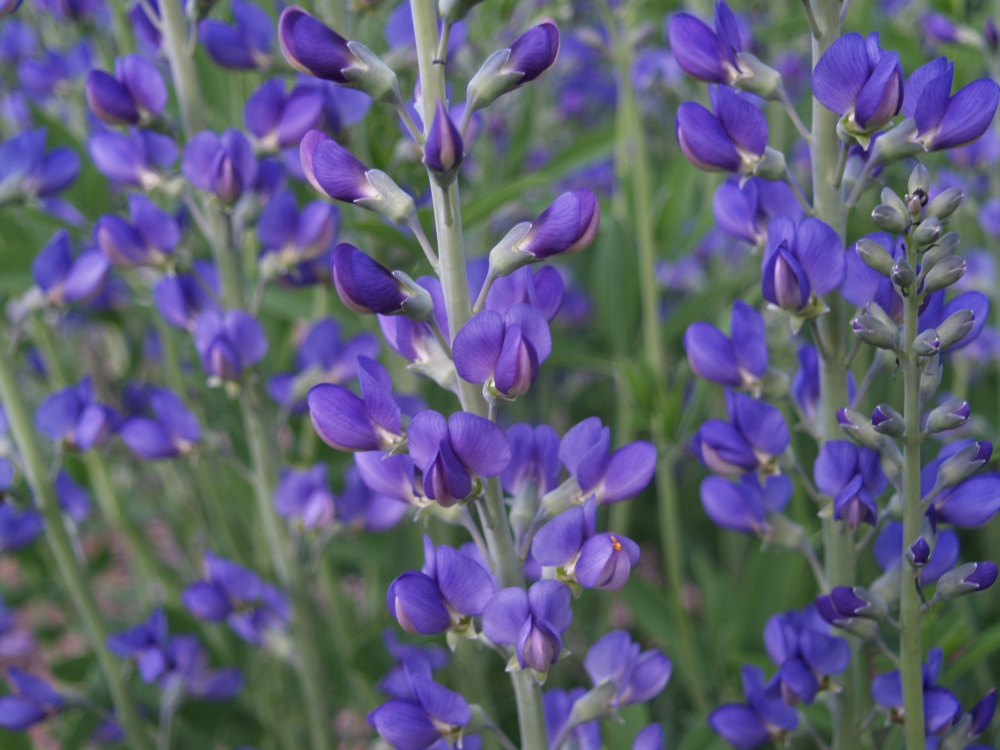 The native spiderwort and the yellow leafed selection ‘Sweet Kate’ (below) are quite vigorous in both damp and dry soils, and though spiderworts prefer sun I have a long established plant that grows in deep shade tucked under an old nandina bush that is shaded by a tree lilac. I am cautious to spray the spiderworts regularly with deer repellent in early spring or the new foliage will quickly be eaten to the ground. It seems deer favor the spiderworts even more than hostas and daylilies, so they should be planted only where deer are not a problem, or by a gardener who will keep up with spraying a repellent. After flowering the foliage of spiderworts quickly becomes spotted and ragged, and they look much better if they’re cut to the ground and allowed to grow back. In this manner they will rebloom again later in the summer.

I am usually too lazy or occupied with other duties to take much care to deadhead or cut plants back to encourage additional blooming, but the spiderworts are greatly improved by following up on this. A few times I’ve let the deer do the pruning for me, but it’s not really a great idea to encourage them.