A few weeks ago I noticed the toad lilies (Tricyrtis, flowering in September, below) were getting a bit taller than I prefer, though they were not at all leggy. Some years I’ve pruned them to be shorter and more compact, and other times I’ve let them grow. If left unpruned they will bloom a few weeks earlier, and they are little less likely to flop in late summer. 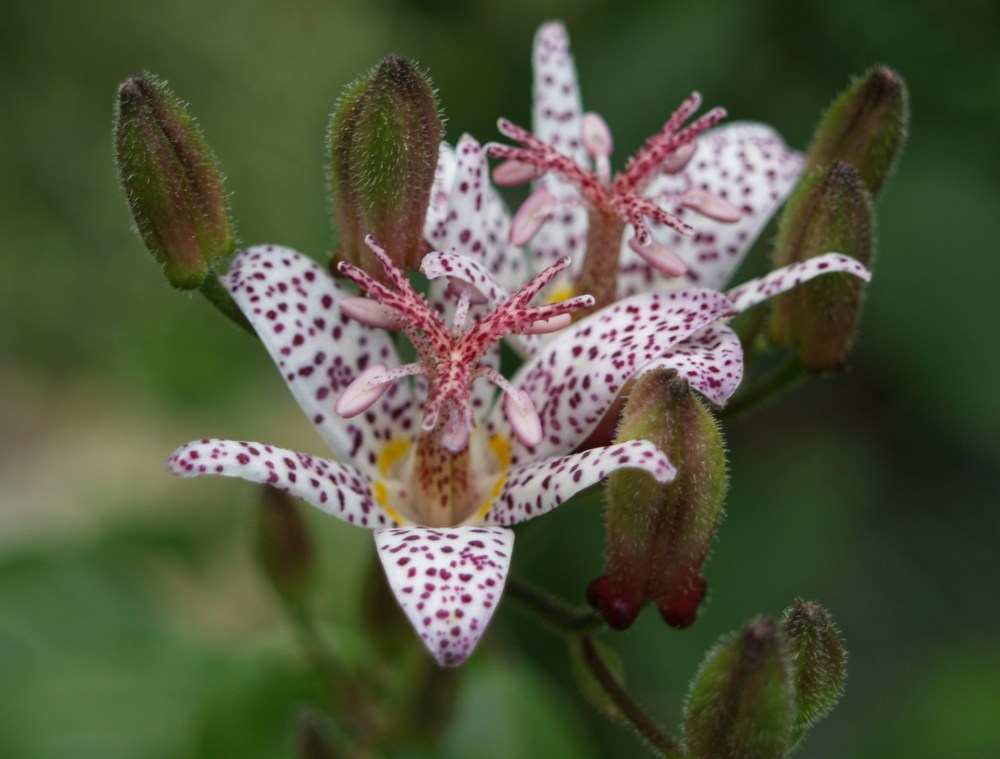 This year several will flower later, though my pruners haven’t left the garage. Deer have nipped them back a bit, thankfully just to the point that I would have cut them. I realized when I saw the chewed stems that I was tardy in spraying deer repellent this month. In past years my wife has reminded me to spray on the first weekend of every month, but I suppose she has begun to take for granted that I’ll remember. Of course, this was a mistake, and fortunately there has been little damage except for the minor pruning of the toad lilies and a few stray branches on lacecap hydrangeas, but barely enough to notice in any case.

Though the deer repellent is effective through repeated rains, many shrubs and perennials grow quickly enough in spring that new foliage is not protected, and this is what the deer ate on the toad lilies and hydrangeas. I wasn’t certain until now that deer would bother toad lilies, but many plants I spray regardless. I know that deer favor hosta and daylily, but will they eat fragrant leafed salvias and agastache? I don’t know, but it’s easy enough to spray a few extra plants rather than risk injury. 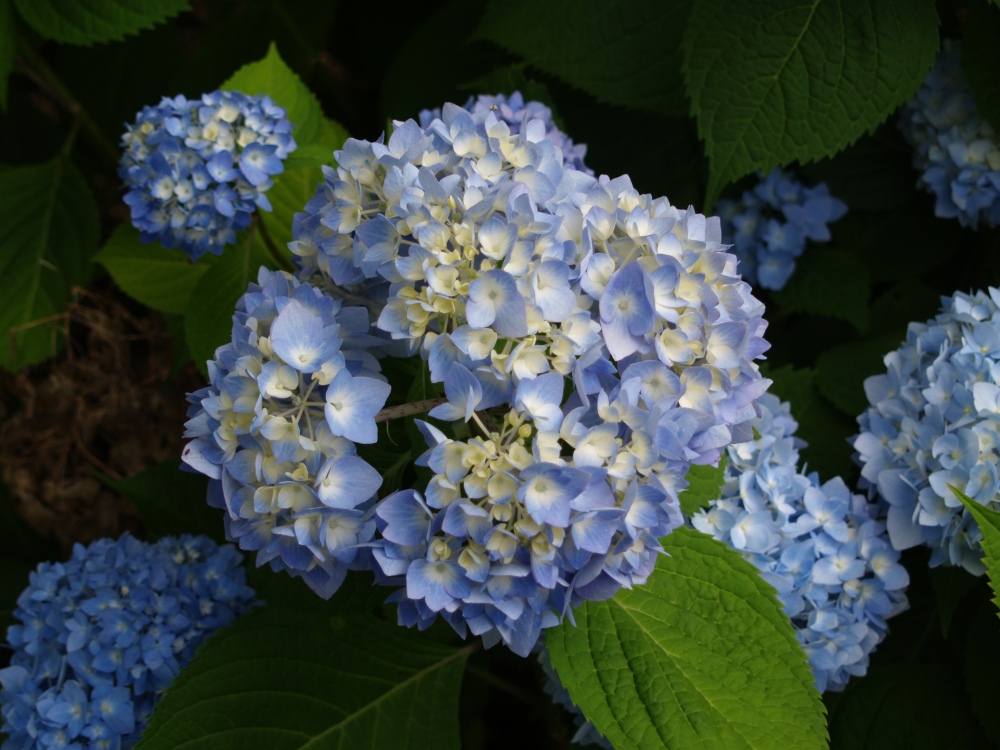 My wife has cut a number of flowers from the blue hydrangeas (Hydrangea macropylla ‘Penny Mac’, above) to bring indoors, but the first batch wilted and withered quickly. She has cut blooms in past years with success, but something was done differently this time. If cut properly the flowers last for weeks, and even after drying they remain ornamental. There are plenty of flowers on the hydrangeas, so I don’t mind that a few handfuls are cut, but I don’t really care for cut flowers brought indoors. I would much rather stroll through the garden to enjoy them. 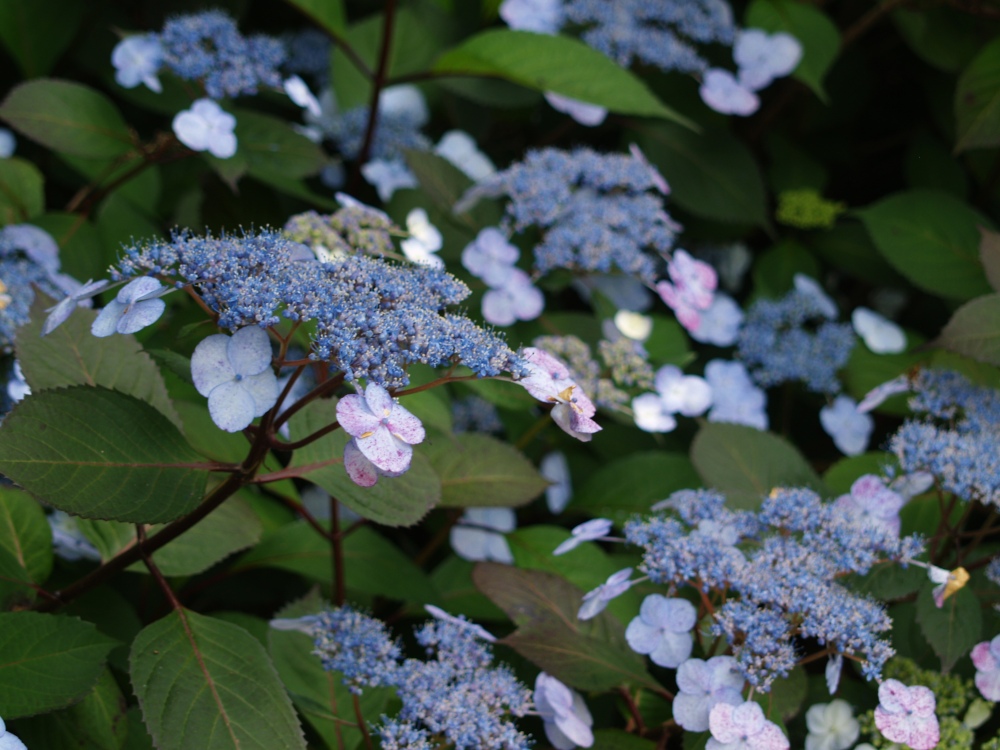 The mophead hydrangeas are quite wonderful, but in recent years I’ve taken more of a liking to the various lacecap hydrangeas in the garden. The flowers of lacecaps are somewhat smaller and flatter then the mopheads, but their colors are often more subtly beautiful. For several years after planting the lacecap ‘Lady in Red’ (above) I was quite disappointed, and considered pulling it out to replace with a more floriferous cultivar. But, my patience (really laziness) was rewarded with dozens (or hundreds) of blooms set against the hydrangeas’ dark foliage. ‘Lady in Red’ was promoted heavily when introduced, but I believe it was somewhat of a flop since it is rarely seen in garden centers today. To see it in my garden from late May through June many gardeners would be encouraged to plant one, but fortunately there are many other fine choices commonly available. 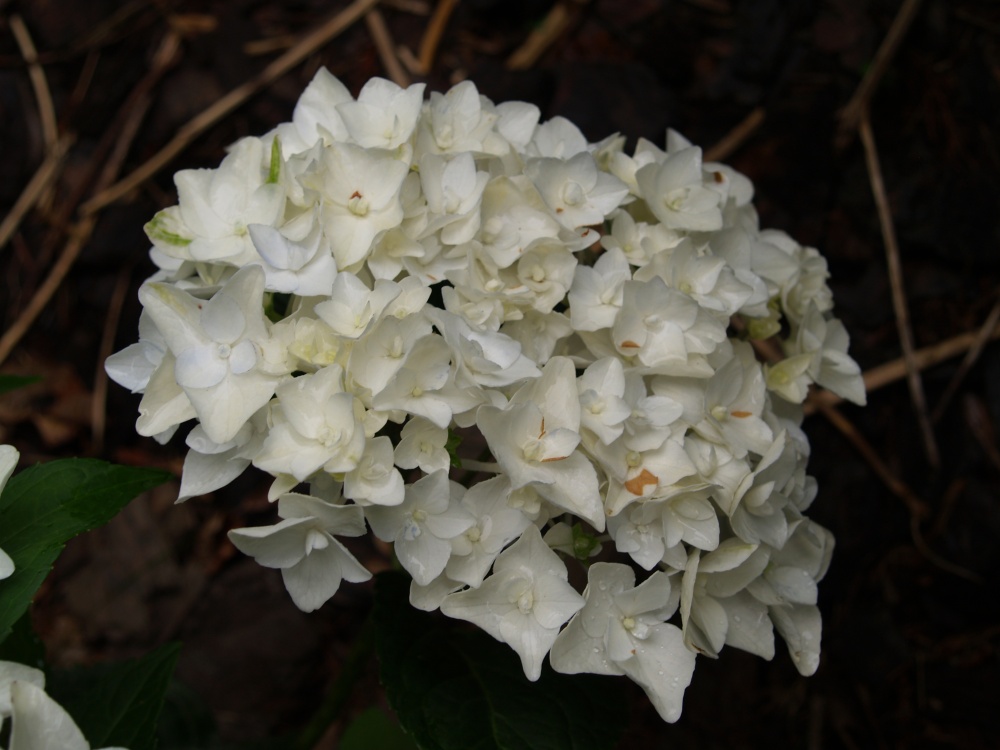 I have planted several of the Endless Summer hydrangea varieties, and I’ve not been so impressed with some as I’ve been with the original blue flowered, reblooming mophead. The white ‘Blushing Bride’ (above) is a nice, white flowered mophead, but its reblooming is scant and disappointing. The lacecap ‘Twist N ‘Shout’ (below) has progressed much as ‘Lady in Red’, with few blooms the first few years, but more as the shrub ages. Even when there are few flowers, they are larger than the typical lacecap’s, and I’m satisfied to have planted ‘Twist N ‘Shout’ with the promise that one day it will be more floriferous. 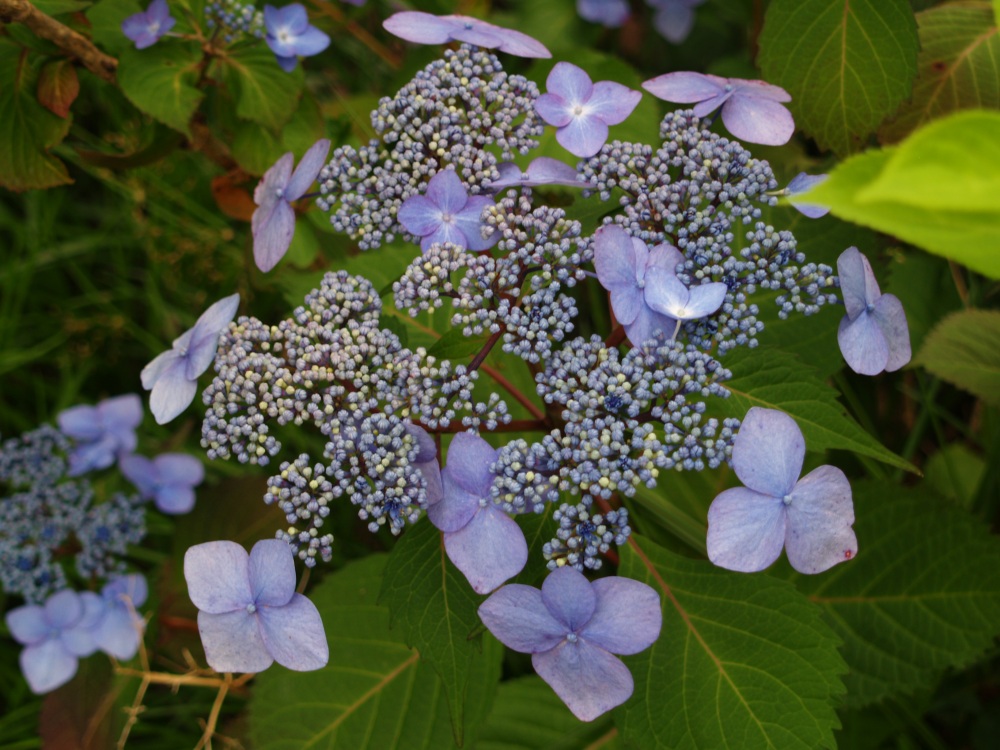