Over two weekends I have burned two piles of brush, twigs and branches, and perhaps some whole small trees that have accumulated over two decades. These were woody prunings and shrubs that died, and branches large and small that have fallen from the tulip poplars and maples that border the garden. Anyone who thinks that an experienced gardener never loses a plant should have seen this pile.

Certainly, there are more responsible ways to be rid of such debris, but I haven’t the energy or inclination to compost on such a grand scale. The small compost pile behind the garden shed is reserved for leafy prunings and tropicals that are tossed out at the season’s end, and little compost is ever harvested, but the waste is greatly reduced in bulk so that it isn’t shipped off to the local landfill.

Earlier in the year I removed two large hornbeams and a small forest of bamboo. There were several truck loads of debris to be rid of, so I rented a large chipper to grind the bamboo and tree branches into mulch. It would have made good sense to chip the brush at the same time, but I was too worn out by the bamboo’s removal, so the brush piles were left behind. The wood chips are spread out in the garden as mulch, and never mind the tales about fresh wood chips being detrimental, robbing nitrogen from the soil. In fact, nitrogen is consumed in the process of decay, but the amount is negligible, and I’ve never had any reason to even think of adding back a nitrogen fertilizer to balance it. 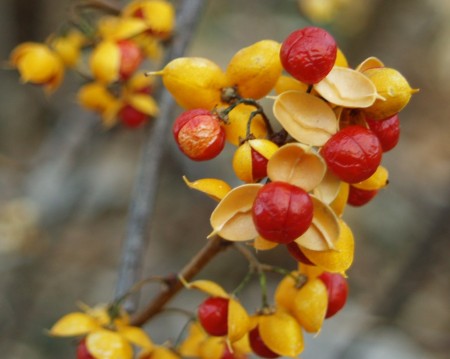 In fact, at the time there was only one large pile. The other was created by the recent removal of a thicket of mulberries and invasive vines that threatened to leap over into the garden. Once the mulberries and vines had been toppled and cut into somewhat manageable pieces, the surrounding area required immediate attention since it is plainly visible from the street. The tangle of vines and branches was impractical to haul to add to the other debris pile (though that was only twenty feet away), so it was clear that burning it in place was the only practical alternative.

The green wood and vines burned slowly, but the older, larger pile burned in half the time, so now all that’s left are a few piles of ash. There’s a void where the brambles and mulberries were removed, so in the spring I’ll spread the ashes and plant the area. I’m not too concerned at this point  about what’s going to go back in.

I haven’t started browsing bulb and perennial catalogs yet, but once plants begin arriving in the garden centers there’s little doubt that I’ll quickly get the urge. For now, chopping out the mulberries and burning the piles is enough to satisfy me that the winter hasn’t been totally wasted. There’s plenty of work to be done to prepare the garden for spring, but today I’m feeling lazy, and I’ll probably feel the same tomorrow. Eventually, I suppose, the garden will be readied for spring, but not this week, and probably not next.