I’m certain that more manicured gardens than mine do not experience the pleasure of having skunk cabbages (Symplocarpus foetidus) growing in their damp shade. Many parts of my garden are dry shade where planting is a struggle, but midway along the rear garden’s border is an area where a trickle of a spring surfaces. Here, native mayapples (Podophyllum peltatum) and Ostrich ferns (Matteuccia struthiopteris) thrive, and in the boggiest spots there are patches of skunk cabbages.

The large, plain green leaves of skunk cabbage (below) slightly resemble big leafed hostas before breeders began to run wild creating the marvelous forms we plant in gardens today to keep our neighborhood deer well fed. They are not as ornamental as the plainest of hostas, but the common name of skunk cabbage is derived from the smell when the foliage is broken (or chewed), so deer and other creatures avoid it. This is not reason enough to plant skunk cabbage, but as part of the natural garden it has its unique delights.

In this damp area I have carved out the worst of brambles and saplings so that the lush ferns, mayapples, and skunk cabbages enjoy less competition and are more visible. While I curse the invasive multiflora roses and barberries that scratch and snarl at the garden’s edges, these natives are rich wonders of the landscape of the forest’s floor.

In early spring, the unusual flower of the skunk cabbage (above and below) only adds to its intrigue. I recall these odd flowering structures from my childhood. Though I had no apparent interest in gardening at the time, the forest fascinated me, and here were unusual growths emerging from the ground. But, kids pass quickly from one thought to another, so I didn’t give the flowers much thought again until they were growing at the edge of my garden. Now, I visit this unique native garden regularly. 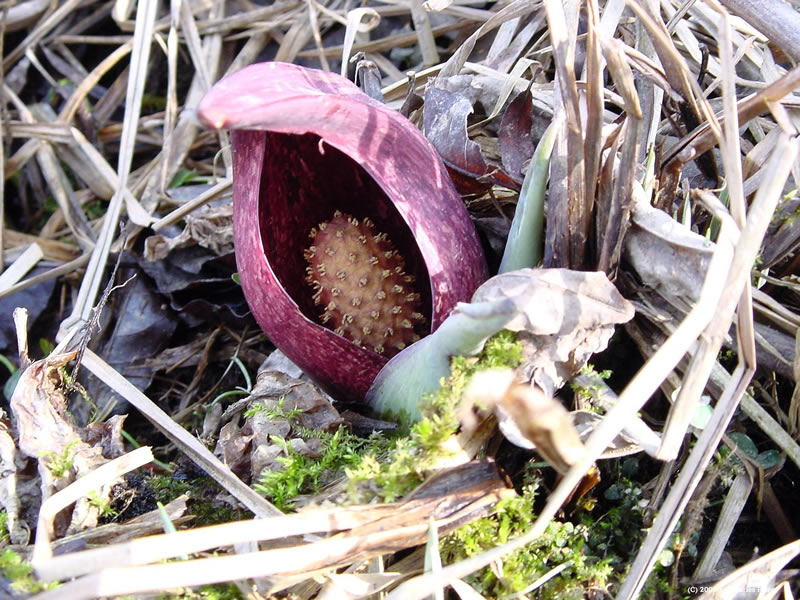