I have little doubt that you occasionally grow weary reading of the various collections of trees in the garden. The catalog of Japanese maples goes on far too long, but it can easily be argued that the number of redbuds is too few. There are several cultivars that I would add immediately, if only there was enough space. The number of dogwoods is just right, I think. 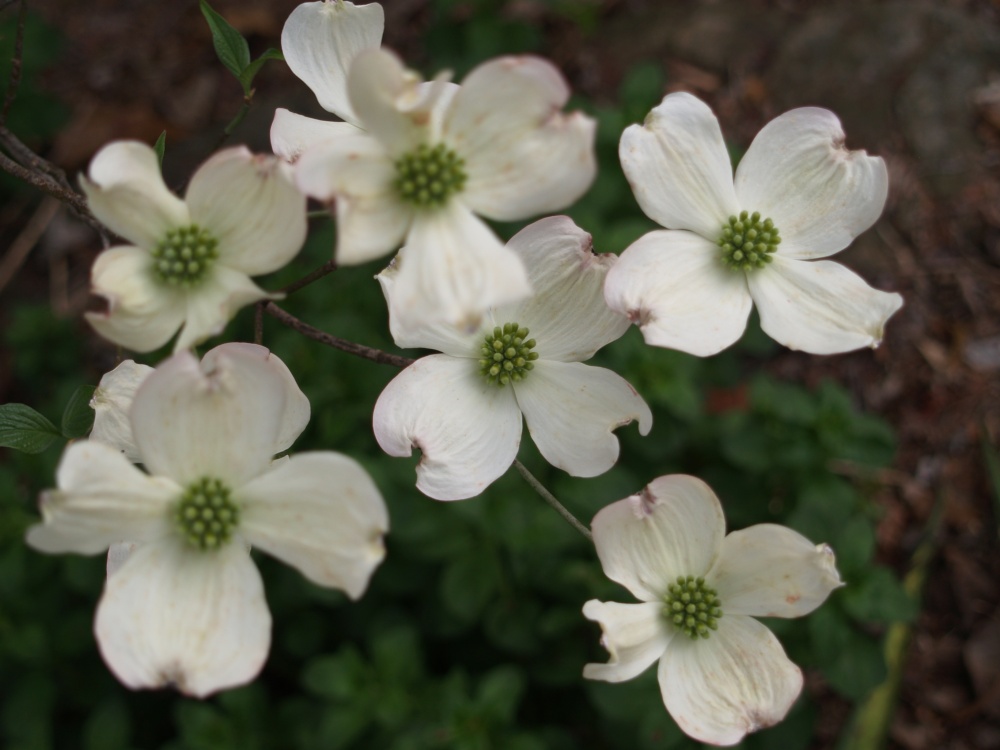 The dogwood (Cornus florida, above) that is native to much of the eastern U.S. is a wonderful tree, and if were not susceptible to a number of debilitating diseases there would be little need to argue the merits of non-natives. More vigorous selections of the native dogwood, such as ‘Cherokee Princess’ and ‘Cherokee Brave’ are less troubled by mildew and antracnose, but their resistance is slight and the foliage of my dogwoods is spotted and mildewed in any damp spring. I’ve not had the opportunity to evaluate ‘Appalachian Spring’, which is said to be more disease resistant, but it’s fair to question the long term prospects of any of the native dogwoods.

Still, I don’t hesitate to recommend the native dogwood. Several in my garden have flourished for more than twenty years, and only dogwoods planted in soil that was too damp have failed. Cautious gardeners might opt for alternatives, and hybrid and Chinese dogwoods have much greater disease resistance while sacrificing little of the tree’s beauty.

In order of flowering time the native typically blooms in my garden in mid April, with variations of several weeks earlier in the odd warm spring, but rarely any longer than a week later in cool weather. The flowers last for two weeks, sometimes into a third just as the hybrid dogwoods come into bloom. The hybrids are crosses of the native American dogwood and Chinese dogwood (Cornus kousa, above), or between the Chinese and Pacific dogwood (Cornus nuttallii). These were developed at Rutgers University to take advantage of the Chinese dogwoods’ disease resistance, which has been confirmed in my garden.

Initially, I planted ‘Stellar Pink’ (above) and the white flowered ‘Aurora’, which languished and eventually failed in damp soil. For several years I was unimpressed by ‘Stellar Pink’. It flowered sparsely, and the blooms could barely be considered pink, but rather white with slight pink blush. In recent years I’ve witnessed too many plant introductions that are over hyped and under evaluated, so I was prepared to be disappointed by the Rutgers’ hybrids.

Then, ‘Stellar Pink’ began to grow vigorously, and after a few years of light flowering it began to bloom densely enough that the foliage was mostly covered for a few weeks. The flowers are still white with a blush, except for one odd season when they could truthfully be called pink. The foliage of ‘Stellar Pink’ is not bothered by heat or humidity, and I have yet to see any leaf spotting, mildew, or ill effects from summer heat.

I was attracted to the Chinese-Pacific dogwood cross ‘Venus’ (above) when I heard that it had flowers the size of a salad plate, many times larger than other dogwoods. I suspected this might be garish, but I’ve done worse things, and the blooms have proven to slightly smaller and almost in scale to the foliage so that this is an attribute, not only a novelty. ‘Venus’ shows signs of vigorous growth, disease resistance similar to ‘Stellar Pink’, and improved numbers of flowers after only a few years. I expect that it will become a staple of gardens. 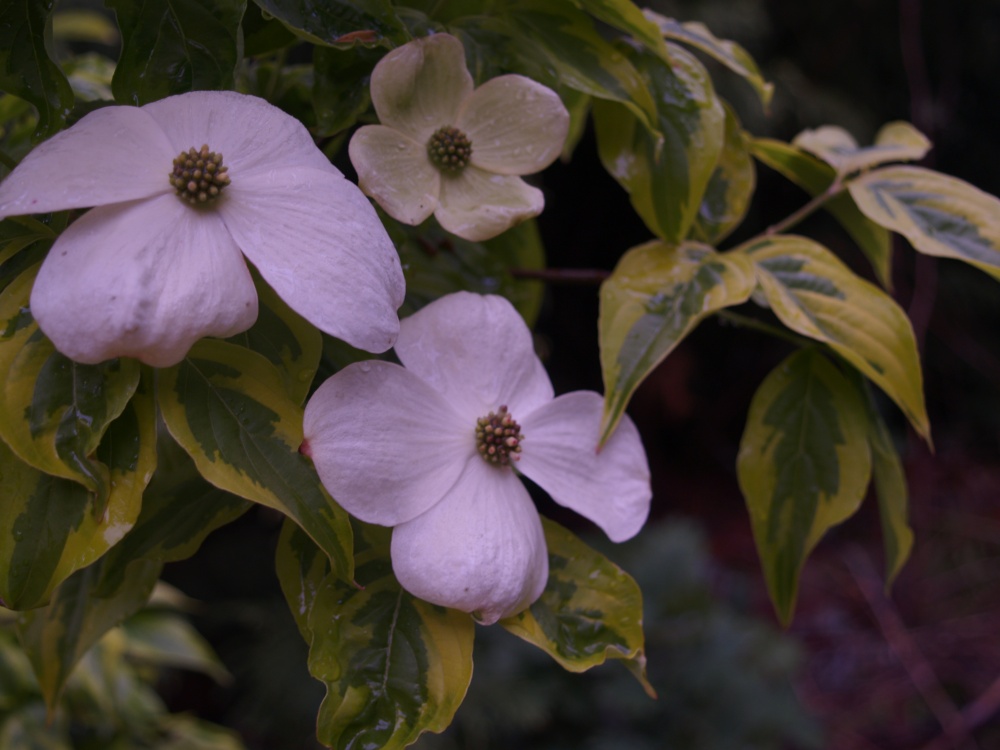 A year ago I planted ‘Celestial Shadow’ (above), a natural mutation of  the Rutgers’ hybrid ‘Celestial’, with green and yellow variegation and white flowers. I am already enchanted by the flower and foliage, which is crisply variegated and a vast improvement over the dependably mildewed foliage of the variegated native ‘Cherokee Sunset’ (below).

The flowers of Rutgers’ hybrid will often provide a good show for several weeks, and as they fade the Chinese dogwoods are coming into bloom. With a greater range of cultivars available, I’ve planted green leafed varieties with white and pink flowers, and two with variegated foliage.

The pink flowered ‘Satomi’ dogwood (Cornus kousa ‘Satomi’, above and below) is similar in flower to ‘Stellar Pink’ in that the flowers show only a trace of pink in most years in my garden. The reason for the lack of color is clearly environmental. Every year I see ‘Satomi’ with dark pink blooms at tree growing nurseries in cooler and less humid Oregon (above) while the flowers on my Virginia grown dogwoods are lovely, but only barely pink (below). 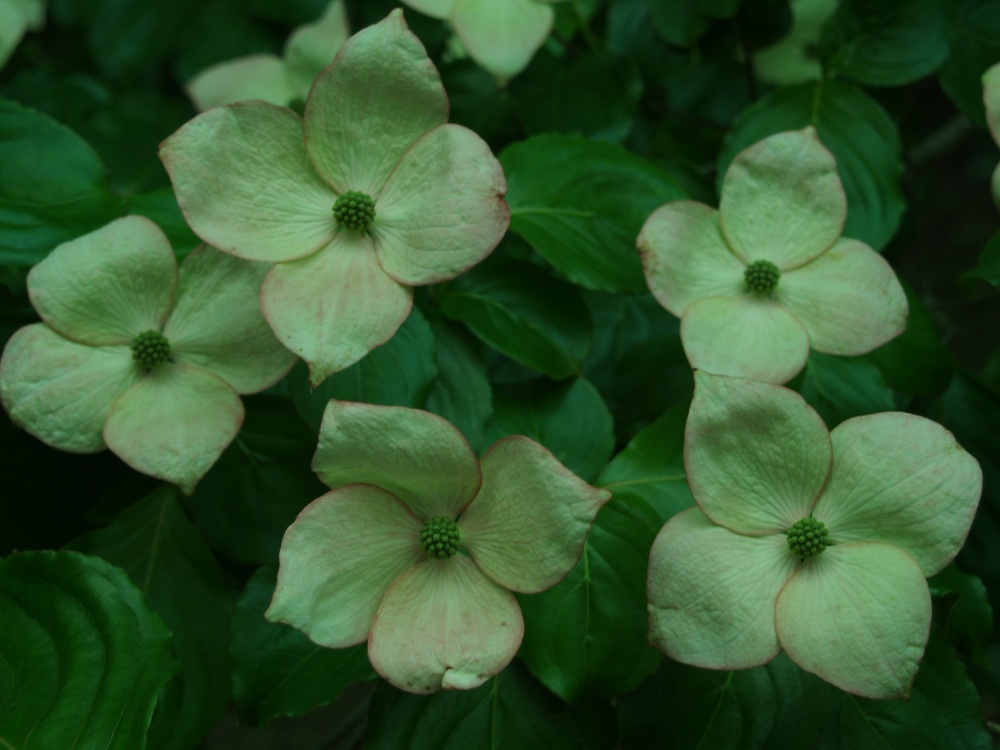 The two variegated Chinese dogwoods present a mystery of another sort. The wide spreading, and almost bush-like ‘Wolf Eyes’ blooms heavily, though the flowers hardly stand out above the green and white variegation. The leaves are slightly curled, not its best attribute, but ‘Wolf Eyes’ is an exceptional tree where there is space. The variegated ‘Samaritan’ grows much more upright and with leaves that don’t curl, but it has grown past twelve feet in my garden, and I don’t recall a single flower. Perhaps this is an environmental issue that I haven’t recognized; I’m quite certain that blooming has not been bred out of the tree, but the variegation is excellent and the flowers are hardly missed. 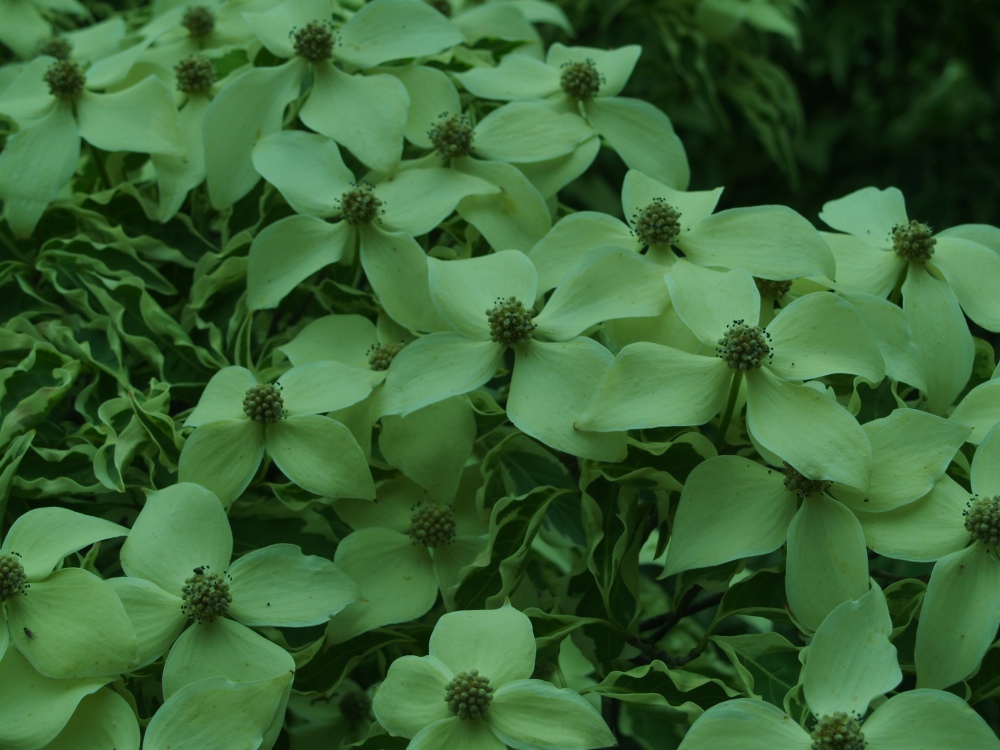 So, in early June the flowering season for the dogwoods is winding down, but with natives, hybrids, and Chinese varieties I’ll have enjoyed their blooms for nearly two months. If not for its disease issues I could easily declare the native to be my favorite, but with this consideration the primary concern to determine a selection for your garden is the time of flowering and the color of the flower or foliage. Each of these is a marvelous choice for the garden.