The Tatarian daisies (Aster tataricus ‘Jindai’, below) at the back of the koi pond are blooming, but for a period in mid summer there was a question if they would. The daisies were in danger of being overwhelmed by exuberant hydrangeas and a paperbush (Edgeworthia chrysantha) that continues to spread far beyond the boundaries that I anticipated.

Lush growth has blocked easy access to this area, so now I must hop from boulder to damp boulder along the pond’s border while avoiding overhanging foxgloves and Joe Pye weeds. It’s quite a feat for an old guy, and I’m not enthused about attempting the crossing too frequently. The treacherous access delayed my pruning the hydrangeas earlier in the summer, but I became increasingly concerned that the Tatarian daisies would be lost completely.

So, finally I got around to it, and found, to my surprise they were doing quite well without my assistance. Some minor pruning was required, and this will be a growing concern in the future, but now in early October they are blooming without a problem. Except, the daisies are much harder to see now with the surrounding foliage, and I can only get close up with great difficulty to see how the bumblebees enjoy this late flowering perennial.

In past years I’ve witnessed that this is often the last flower that many bumblebees visit before their demise. While some bees overwinter, many others perish in mid autumn, and often I find bumblebees that have succumbed while gathering nectar from the daisies. As the daisies’ blooms fade the dead bumblebees remain in place, and it’s a bit disturbing to think that the end of life can come so suddenly.

Tatarian daisy is a tall growing, coarsely textured perennial, so it is inappropriate for any position except the back of the border. In my garden they are placed between shrubs, and so long as the shrubs don’t overwhelm them, this is an ideal situation. The daisies don’t grow too large to expose the large leaves until late summer, and then within a short period they are blooming. The flowers last for weeks, and even after fading they are colorful as long as you’re not looking from close up. 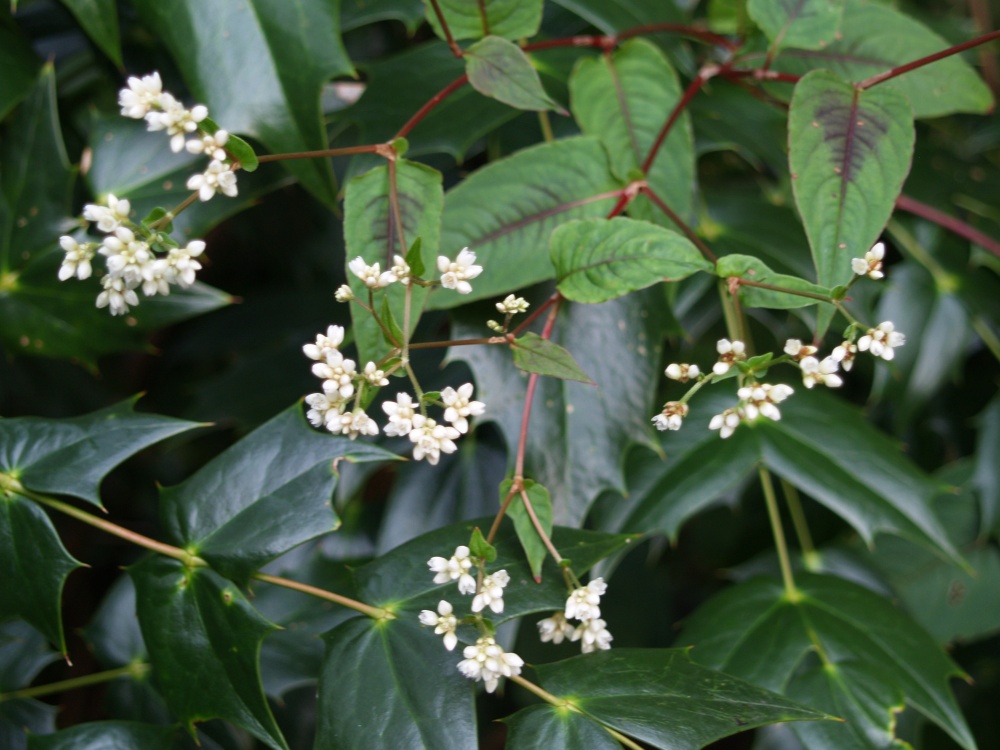 ‘Red Dragon’ fleeceflower’ (Persicaria microcephala ‘Red Dragon’, above) is blooming beside one of the garden’s smaller ponds, though I’m guessing that these are seedlings of the originals since they are not so red anymore. ‘Red Dragon’ is best utilized for its foliage, and not the small white flowers that appear on and off from mid summer into autumn. But, when not too much else is flowering the blooms catch your eye, particularly against the backdrop of the glossy foliage of leatherleaf mahonia (Mahonia bealei).

Persicaria can be quite aggressive, but ‘Red Dragon’ not so much so, and here it is hemmed in by a red leafed loosestrife (Lysimachia ciliata ‘Firecracker’) that is also quite rambunctious if planted in damp soil. In dry soil it spreads enough to require some attention to pull rhizomes that pop up through neighboring hostas and liriopes, but this is easily done and it’s not too much trouble.

A Peruvian lily (Alstroemeria ‘Tangerine Tango’, above) planted a few years ago had not managed to gain much of a foothold until this summer, and since then it has bloomed continuously. Its stems are floppy enough that I’m anxious for the small shrub planted beside it to grow a bit to provide some support, but the flowers are delightful. Earlier in the summer deer discovered the blooms, and for a short while I had a dickens of a time figuring how to spray the emerging buds to prevent them from being nibbled. Eventually everything worked out, and I figure that the lily will continue flowering until frost (which could come any day now that were into October).

There are a number of Peruvian lilies that are not sufficiently cold hardy to survive in my garden, but ‘Tangerine Tango’ should have no problems in my Virginia garden in the foothills of the Blue Ridge. Other varieties planted in more shade grow reluctantly and have refused to flower, but in full sun the Peruvian lily does fine. With seasonal temperatures forecast, the blooms could be enjoyed for several more weeks.