It appears that my quest to rid the garden of the invasive Oriental bittersweet vine (Celastrus orbiculatus, below) has been successful, and without any of the ensuing complications that I feared. A year ago, the thick vine climbed far up into a mulberry that arched over the garden from a neighboring thicket of brambles and willows. The vigorous bittersweet then leaped a short distance into the top of the yellow flowering ‘Elizabeth’ magnolia (Magnolia acuminata ‘Elizabeth’) at the garden’s edge.

There are American native and Oriental bittersweets, and both are exuberant vines with delightful autumn berries. But, the Oriental bittersweet has managed to make a nuisance of itself by seeding prolifically and overwhelming trees that it climbs into, so when it was discovered climbing into the magnolia, immediate action was required.

Now, if you’ve visited these pages with any regularity you’ll be surprised that anything I do is undertaken with immediacy. Instead, I’m often content to let nature take its course, and sometimes a chore can be avoided entirely if enough time is allowed. But, when properly motivated I will react to drop everything and work tenaciously until a task is complete, and the threat of the invasive vine was just cause for a swift and determined reaction.

First, with astute self awareness I realize that if I let something drop, the next time I think of it could be just prior to writing the sad tale whining of the magnolia’s demise. The problem was not exactly now or never, but suffer now or suffer doubly later. I’ve witnessed the consequences of vines run amok, and I could not sit by idly while ‘Elizabeth’ (above) was invaded.

The task was not so simple as chopping out the thick trunk of the bittersweet vine. It was apparent also that the mulberry had grown too large, and was arching too far into the garden so that the magnolia had begun to lean away from it. I saw no value in the weedy mulberry, so both it and the bittersweet would be cut out. As it turned out, a handful more small, weedy trees were also chopped out, along with thorny brambles and multiflora roses, and now the space was wide open.

Except, and often there are glitches to be considered, I hesitated to plant into this newly opened area, fearing that the mulberry and bittersweet would sucker energetically from the roots that were left in place. I decided that the labor to dig out the extensive roots was too strenuous a project, and that I would follow up in the spring to spray an herbicide to knock down any new growth. 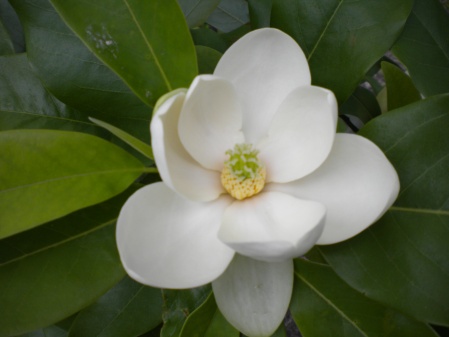 Here is where disaster typically strikes, and I’ve experienced more than a few. Shortcuts are seldom rewarded, but all has turned out for the best, and neither the mulberry or bittersweet has put up much of a fight or become a problem. By mid spring I was planting, and near the trunk of the mulberry there is now a bushy Sweetbay magnolia (Magnolia virginiana, above).

Once the brambles were removed there was a surprising amount of open ground, that is now planted with a variety of hellbores and hostas. Oh yes, space was also found for the Catalpa (Catalpa speciosa) that I was so anxious to plant, and in part shade everything is growing happily along. Occasionally, a plan works out better than anticipated.