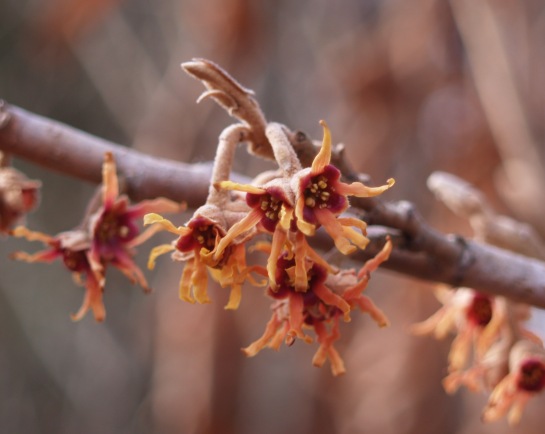 Despite the horrid cold of recent days, the vernal witch hazel (Hamamelis vernalis, above) blooms on, though the ribbon-like petals curl tightly in the worst of the freeze for protection (below). My wife tells me that scents are muted by the cold, but I’ve never paid much attention to this because I’m generally resistant to even the strongest fragrances. I rarely can smell the most fragrant of the witch hazels without poking my nose within inches of the small blooms (See a chart of fragrant witch hazels complied by the Scott Arboretum of Swarthmore College), and even then the scent is far from overpowering. (I am also color blind, which could account for some of the garden’s clashing floral combinations that are not a bother to me at all.)

In recent, inordinately warm winters, there were afternoons when the spicy scent of witch hazels flooded the tree enclosed lower garden (I’m told), but not in today’s cold. Of course, the primary issue why the fragrance cannot be enjoyed is that the gardener is not inclined to venture outdoors when temperatures are in the teens and lower. But, for a variety of reasons I’ve found myself wandering about the garden on chilly evenings and in late morning as tiny snowflakes floated to cover the garden.

On this recent morning, as the snow arrived a few hours later than expected, I was suddenly motivated to plant a few leftover hyacinth bulbs that were found on the shelf in the garage. With nighttime temperatures hovering near zero for several days, grassy areas and nearly bare ground were obviously frozen, and why I even considered to try digging in the leaf litter at the forest’s edge, I can’t imagine. But, the partially decomposed cover of leaves insulated the ground so that I was easily able to dig, and the handful of fat bulbs were quickly planted. 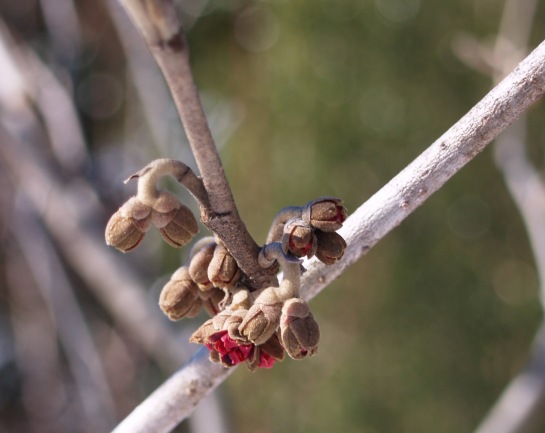 With this long spell of cold many winter blooms will be delayed. By late January I expect to see a glimpse of yellow from paperbush (Edgeworthia chrysantha) and ‘Arnold Promise’ witch hazel (Hamamelis x intermedia ‘Arnold Promise’), but only ‘Diane’ (above) shows even the faintest hint of color in late January. I’m hoping for more hospitable temperatures and more fragrant flowers in February.