At the forest’s edge, serviceberries lean far over into the sun, scattered clusters of small white flowers twinkling against the stark bareness of early spring. A native woodland tree, the serviceberry (Amelanchier canadensis, below) grows with such informality that I find it ill suited for a position as a centerpiece in the garden. Instead, it is marvelous when placed at the periphery, with a structure as a backdrop, and particularly with its back to a section of forest, which is where it is generally found in the wild. 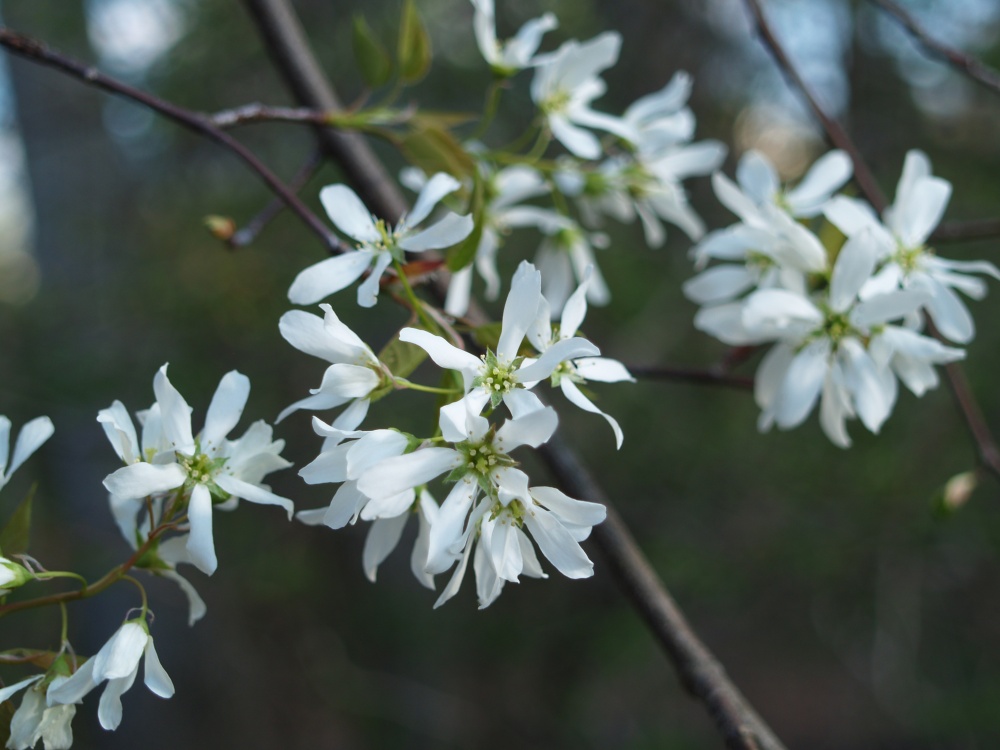 If given a bit of sun, serviceberry will exhibit more abundant flowers than the few found on trees fighting through the forest for a peek of sunlight. In my garden, the single serviceberry is planted with upper branches reaching into the sun, so lower branches are mostly green while the top is covered in white blooms. The tree has suffered from occasional bouts with severe winds, and a few of the dozen or more trunks have been cut out, though the damage is hardly evident.

(Note: In recent years, white flowers at the forest’s edge along a highway are as likely to be seedlings of the invasive Callery pear (Pyrus calleryana), escaped from neighborhood gardens. Bradford and Chanticleer pears are quite splendid in flower, and with spectacular autumn foliage, but their small fruits are quickly consumed by birds. The pear grows with vigor in sunny fields and along fence rows where seeds are deposited, but scattered seedlings also compete successfully even in the shade of the forest’s edge. The trees are also highly susceptible to damage from summer thunderstorms once the trees are ten to fifteen years of age, and too many trees are disfigured or removed due to wind damage.)

Though an occasional single trunked serviceberry can be found, this is accomplished only with some effort, and the tree typically grows with multiple irregular trunks. But, regardless of a single trunk or a handful, the branches arch asymmetrically so that it is rarely chosen for a position where a dogwood, redbud, or perhaps a Japanese maple are more obvious choices.

If serviceberry is planted in proximity to others in the forest, or more than one is planted, the blooms will be followed by edible dark blue fruits. Serviceberry is often included in lists as an ideal tree for the edible garden, when in fact the fruits are not so abundant as to provide much of a harvest, and will be picked only if you are able to beat the birds from plucking them. If you are looking to fill the cupboards with berries, there are superior alternatives, but for delightful blooms that will then benefit the local wildlife, seviceberry is an exceptional choice.

Before the native serviceberries fade, the white blooms are joined at forest’s edge by the more prolific pink-purple blooms of redbuds (Cercis canadensis, above), and soon after by the larger white blooms of the native dogwood (Cornus florida, below). Now, flowers are more abundant so that for a few weeks the border of every highway in the area is the equal of the best cultivated gardens.

While serviceberry has some limitations for use in the garden, dogwoods and redbuds have more possibilities. With more sun, both grow full and wide, and are exceptional in flower and in leaf. On occasion, redbuds will develop long brown, pea-like seed pods that are hardly ornamental, but this is rare and hardly a consideration in choosing such an exceptional small tree.

Some note that redbuds and dogwoods, as well as serviceberries and cherries and most flowering trees, bloom for only a few weeks, and why bother? Unquestionably, the period of flowering is short, though some credit must be given to the week ahead of flowering when color is nearly as splendid as when in full bloom. To my thinking, the few weeks of flower are an encouragement to plant another tree so that flowering extends through the spring. If redbuds and dogwoods flowered for months, like crapemyrtles, they would be taken more for granted and these would not be treasured so much.

The large, leathery, heart shaped foliage of redbuds is particularly nice, and cultivars with red, yellow, or variegated leaves (‘Forest Pansy’ redbud, above) offer many options, all with the familiar spring flowers. ‘Oklahoma’ and ‘Texas’ redbuds have glossy foliage, but in climates with sufficient rainfall there is little advantage in planting these more drought tolerant varieties.

The native dogwoods have pleasant enough foliage, and in early autumn clusters of red berries are quickly consumed by birds. The autumn leaf colors are long lasting, and as delightful as the most spectacular maples or blackgums. There are, of course, red and pink flowered dogwoods, and ones with variegated foliage can be found (‘Cherokee Sunset’, above), though these are particularly prone to foliar diseases. 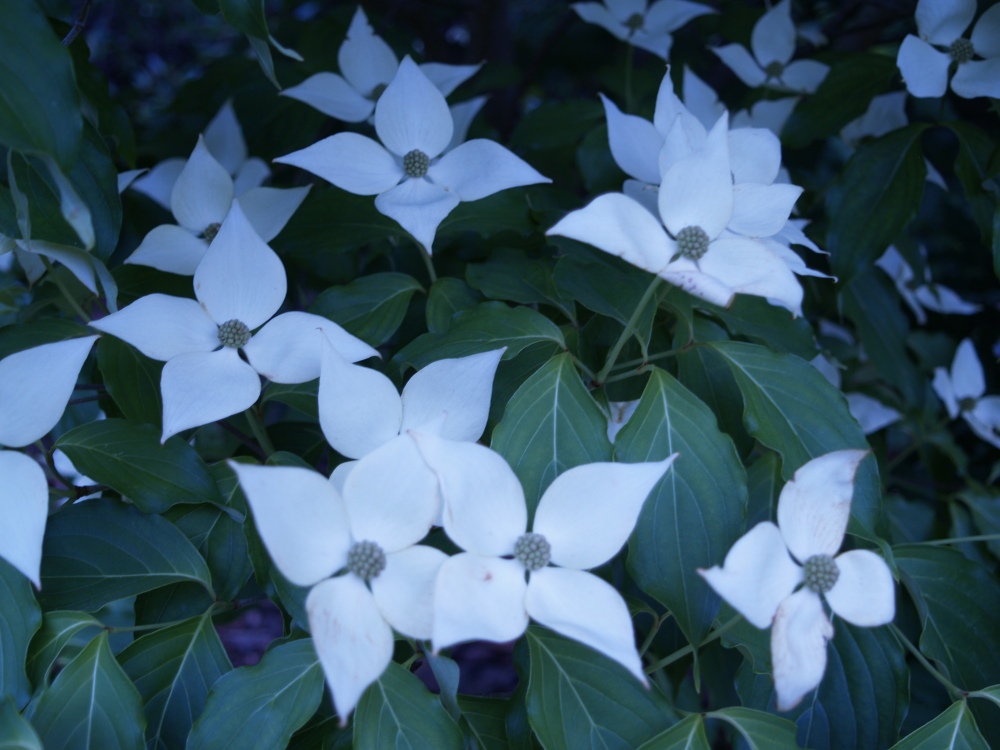 To extend the period of flowering into May and June hybrid and Chinese dogwoods (Cornus kousa, above) are excellent choices, and these have the added benefit of more vigorous growth and more tolerance of the varied maladies that afflict the native. My recommendation is to plant one of each, at least. If space allows, the garden is greatly improved by starting the spring with the blooms of serviceberry, with redbud and dogwood to follow. If there is space of enough for hybrid and Chinese dogwoods, there will be continuous blooms from the start of April into June.