The Bigleaf magnolia (Magnolia macrophylla) is tall and gawky, and its enormous size makes it undeniably inappropriate for most properties. But, I cannot think of a single tree in this garden that pleases me more. In flower, it’s wondrous, though the huge blooms are sparse in number compared to other flowering trees. I suspect that many male gardeners are also enthralled by large leaves (and perhaps a few females), and I know of no other cold hardy tree with ones that compare. Certainly, the monstrous leaves have something to do with gaining my favor, but also, the magnolia is one of a few that came to the garden with a story, and these will remain treasured no matter the joy they bring, or the havoc they might wreak. 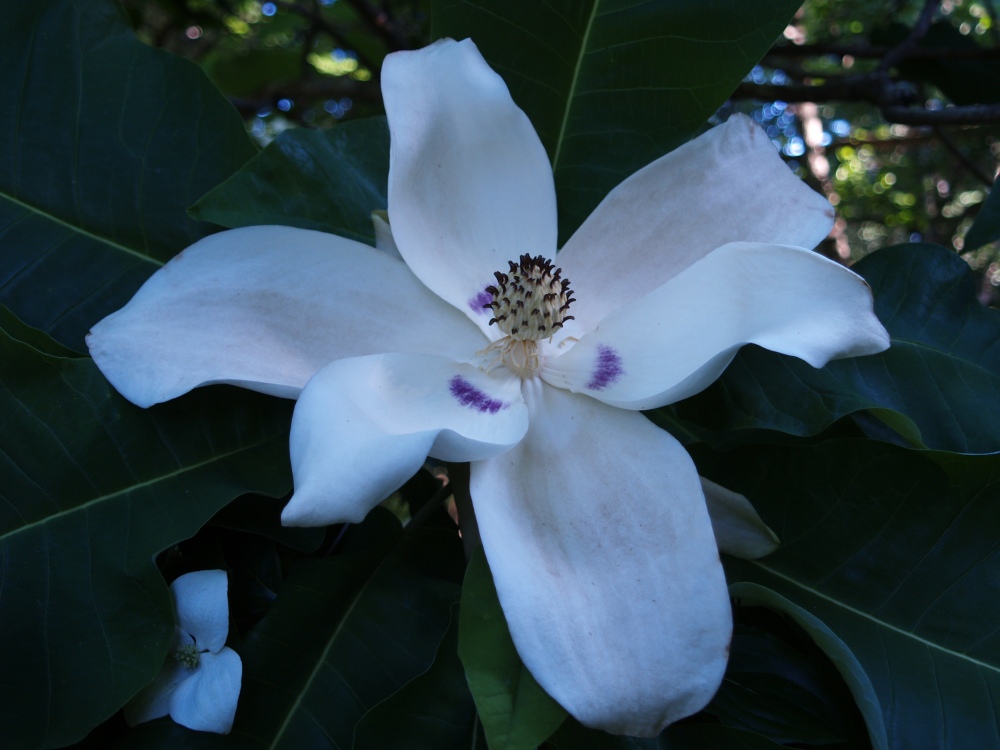 The Bigleaf magnolia was spotted at a tree nursery in middle Tennessee twenty some years ago while bumping through a dusty field of tall grass on a hot July afternoon. I accompanied the nursery owner as we crossed this weedy patch, traveling from one field of dogwoods to another of oaks and maples. Our pickup bounced along through depressions left when trees were dug several years earlier, and occasionally a small dogwood hidden in the grass swatted against the front bumper as we proceeded.

Here and there were taller trees that stood above the grass, and most had been left behind because they were ill formed or scarred. One curious tree captured my attention. It grew tall and straight with few branches, but its large dull green leaves were unlike the other common shade and flowering trees. I wondered what this tree was, and why it was left behind, and when I learned it was a Bigleaf magnolia the idea was quickly struck that this unusual tree should be planted in my new garden.

Arrangements were made for digging once the tree was dormant, and in November this awkward magnolia with huge leaves was planted in the side garden. There were, of course, no leaves until the following spring, and with few bare branches the tree looked as if it could never hope to fill this space.

But, spring arrived and a few moderately sized leaves appeared, and then a flower or two that were nearly enough to comfort me that this was indeed the tree I had wandered upon. By the third spring the tree began to grow with vigor, and within a few more years it showed indications of the monster it would become.

In the side garden the magnolia was planted with adequate space (I thought), but after two decades it has overspread  a pink flowered Chinese dogwood (Cornus kousa ‘Satomi’, above) and several smaller shrubs. The dogwood, sweetshrubs (Calycanthus floridus ‘Athens’, below) and hydrangeas (Hydrangea macrophylla) have managed quite well as lower limbs of the magnolia have faded, and now only a few of the magnolia’s branches are low enough that I can reach to enjoy the impressive blooms.

As the bigleaf magnolia grows it nudges against native blackgum, swamp maples, and tulip poplars at the forest’s edge, and with the dogwood shielding the front the magnolia is barely seen, except by looking up. But, there it is a magnificent sight.