I haven’t the gumption to prune the tall and lanky ‘Winter Sun’ mahonias (Mahonia x media ‘Winter Sun’, below) down to a height where most of  the splendid yellow panicles can be enjoyed at eye level. This is an evergreen shrub that grows taller than expected, at least taller than I expected, though references seem correct that it will grow to more than ten feet tall. The handful that I’ve planted are certainly headed in that direction except for one that is somewhat stunted by shade.

I am skeptical about information on plant tags, like most gardeners I suspect, but also about heights and widths, cold hardiness, and just about anything about a plant found in references until I witness it for myself. Now, the mahonias are double the height of the sprawling leatherleaf mahonias (Mahonia bealei) in the garden, and they have grown to where a rejuvenative pruning is required.

Unfortunately, there is more reason to prune than only to bring the blooms of ‘Winter Sun’ down to sight level after the past winter when many mahonias suffered considerably. Younger plants in the neighborhood were killed by below zero temperatures, though well established plants in this garden survived without too much trouble, but some dead branches have left the shrubs shabbier than preferred. The matter of tidying the mahonias is somewhat complicated by the thorny leaves that are vicious when green, and deadly when they have died and dried. The obvious solution is to utilize a pair of sturdy leather gloves and long sleeves for protection, but I am more comfortable bare handed, so I must suffer from this stubbornness, and of course this becomes an excuse to delay what inevitably must be done. 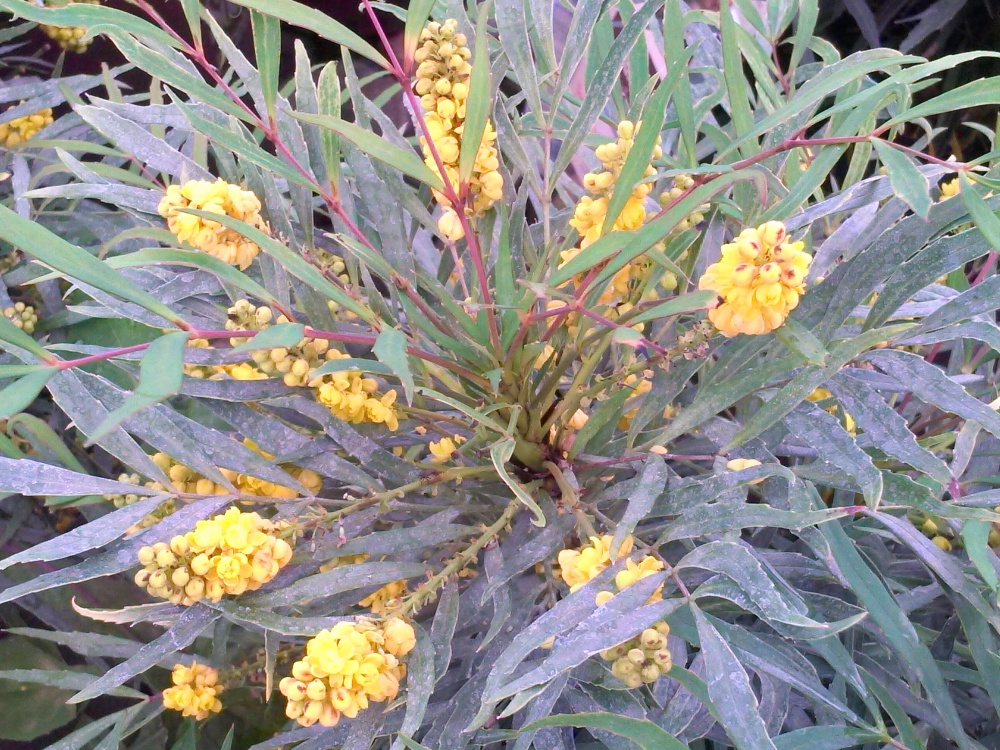 As with too many plants, I’m told (by my wife) that it’s not necessary to collect one or more of everything, but I’ve been intrigued from the time that ‘Winter Sun’ first began flowering in November and persisted into January. So, I’ve added the much lower growing and considerably less cold hardy ‘Soft Caress’ (Mahonia eurybracteata ‘Soft Caress’, above) that has struggled through typical winters and died in the recent cold one. Of course, another couple were replanted late in the spring since it will probably be another twenty five years before it’s that cold again. As the name implies, the foliage of ‘Soft Caress’ is hardly dangerous. Instead, the low evergreen gives almost the look of a fern of some sort, and though the early autumn flowering panicles are much smaller than other mahonias, they are showy enough.

This year, I also planted a few of ‘Charity’ (Mahonia x media ‘Charity’, above), which is so similar to ‘Winter Sun’ that I can’t tell the two apart. I read that it will grow only to six or seven feet tall, but I’ll wait to see before I believe it. The leaves are indistinguishable from those of ‘Winter Sun, they are equally spiny, and they are flowering at precisely the same time, given a bit of leeway for sun exposure. I’m certain that ‘Charity’ will be every bit as splendid as ‘Winter Sun’, even if there are no noticeable differences, and I expect ‘Winter Sun’ and ‘Charity’ to flower through much of the early winter.