After a single day a week ago when temperatures rose above fifty and a start was made on the long list of chores that must be accomplished by spring, the current spell of cold is even more an annoyance. February is often a month of extremes, one day teasing that spring is imminent, and the next causing dread that temperatures might not warm again for weeks.

This week will be the most prolonged period of cold through this winter, and though overnight temperatures will near zero each night, this is not inordinate cold. There should be no damage to witch hazels (Hamamelis x intermedia) that are just beginning to flower, though the ribbon like petals will retract into a tight ball for the duration. Buds of hellebores are poised to open with another day or two of milder temperatures, so these will be delayed a bit.

Temperatures this week might not rise above freezing, and they could dip below zero for a few nights. If so, flower buds of paperbushes (Edgeworthia chrysantha) and spring flowering camellias (Camellia japonica) might be injured. I do not even try to protect these since I’ve rarely witnessed success from these efforts, and a year or two without blooms on one plant or another is hardly a catastrophe. 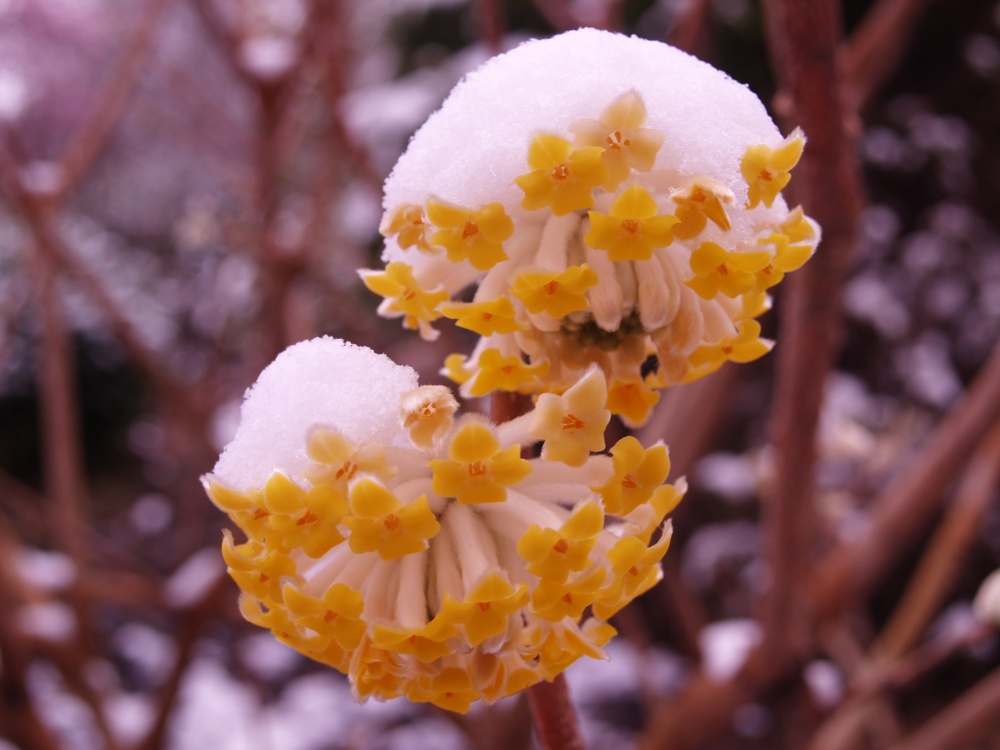 Paperbushes suffered considerably a year ago after a handful of nights below zero. Shrubs that had spread more than ten feet required drastic pruning to a third of their size, but after initial concern that they would not survive I was relieved that only pruning was necessary. The bare and butchered shrubs look a bit awkward without a canopy of foliage, but they revived nicely in summer last year and I looked forward to seeing the flowers in a few weeks. Today, I’m hopeful.

The sprawling Winter jasmine (Jasminum nudiflorum) shows only the barest glimpse of yellow, though it often is in full bloom by late in January, and occasionally flowers early in the month. Late in autumn the jasmine was chopped back so that it does not grow to cover the waterfall of the koi pond, and hard pruning is required another time or two through the year for this vigorous shrub.

Now, I am missing the large ‘Arnold Promise’witch hazel that died a year ago, not from winter injury, but from increasingly damp soil that also threatens a tall holly. The drainage issue could not be corrected, and in mid February the bright yellow blooms are fondly recalled. Last year, of course, there were no flowers, and the previous year was when damage from the saturated soil first became evident with sparse blooms.

I am considering planting another, though I’m uncertain that I have the patience for it to grow again to a large shrub. Also, where one could be planted with sufficient sun without carving out additional sections of lawn, I don’t know. I’ve been warned by the wife not to expand the garden further, but I’ve ignored these instructions in the past without stirring too much conflict, so I’ll wait on a final decision until the day I’m face to face with an ‘Arnold’ of reasonable size. Certainly, I’ll  be tempted.

There is no problem with the other late winter flowering witch hazels, ‘Diane’ and ‘Jelena’. Both flower dependably, though both were planted into a bit too much shade so that blooms are more sparse than if they were properly located. With my color blindness, red and rust do not show as well as the bright yellow of ‘Arnold Promise’, so this is the root of this potential quarrel with my wife.

Today, the wind is howling and the day’s high will not reach twenty degrees. A week ago I was outdoors working, and by midday had stripped to short sleeves, but today I’m not tempted to go out for any reason. The jays have nearly emptied the feeder of sunflower seeds, but they’ll have to make do until tomorrow when temperatures warm by a few degrees and the snow has melted to make the stone paths less treacherous. If I venture out, it will be for a few short minutes. Later tomorrow the most substantial snow of the winter is forecast, but that is a story for another day.