Among collections in the garden, space considerations allow a relative few magnolias. Besides the shrub-like form of the Star magnolia (Magnolia stellata ‘Royal Star’, below), most grow to substantial proportions, and so the gardener is encouraged to choose wisely. Make no mistake, many small magnolias will grow to the size of a one car garage, and larger ones will occupy double this space. 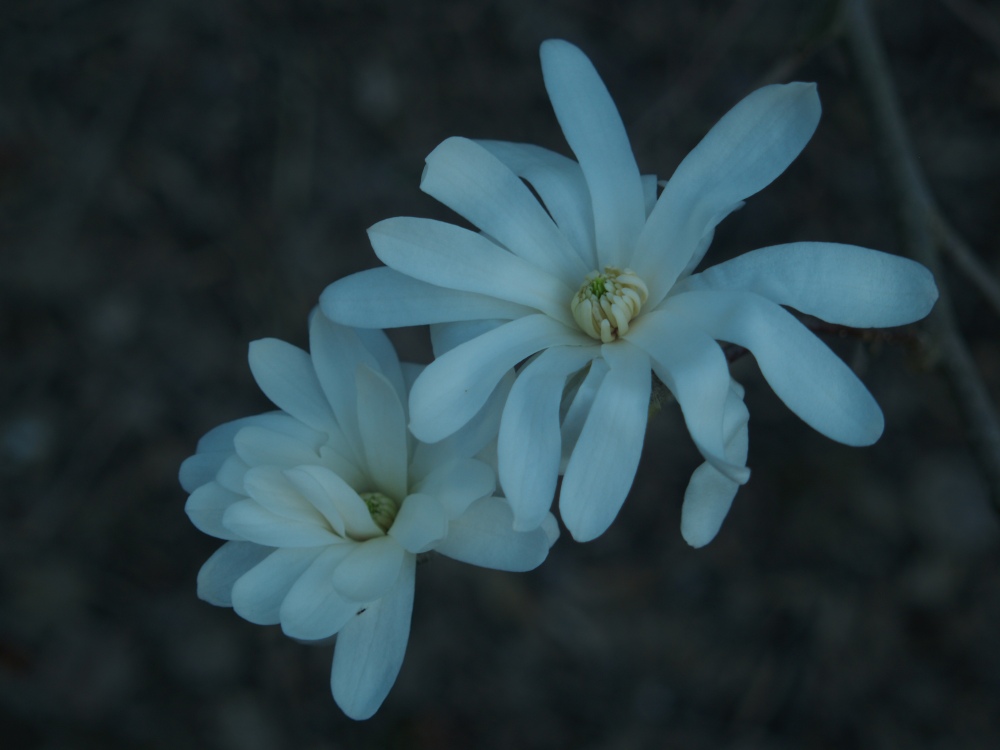 There are evergreen and deciduous magnolias in the garden, with deciduous types the earliest flowering trees in the garden. ‘Dr. Merrill’ and ‘Royal Star’ often flower early in March in this Virginia garden, and flowers are occasionally damaged by freezes that are common in late winter. While planting early flowering magnolias is avoided by some for this reason, I would become impossibly anxious without flowers in late winter. 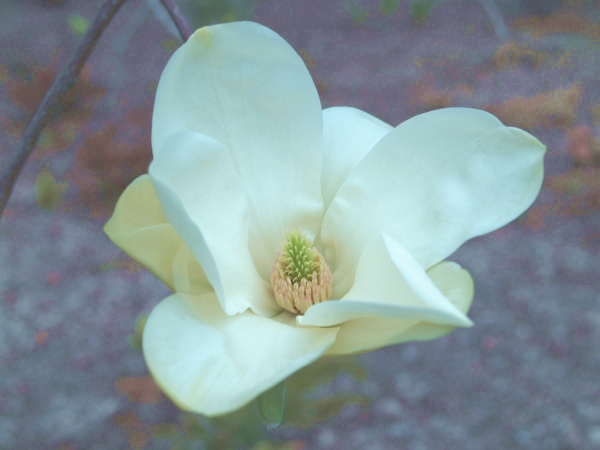 The purple flowered ‘Jane’, and yellow ‘Elizabeth’ (above) are safer choices, flowering weeks later, and usually after the worst of winter freezes, though ‘Elizabeth’ reached its peak flowering exactly on the day of a night that dropped into the low twenties this spring. Flowers went from pale yellow to black overnight, and so much much for the safer alternative. The blooms of ‘Jane’ were also damaged, but it flowers over a week rather than all flowers maturing at once, so many escaped injury. 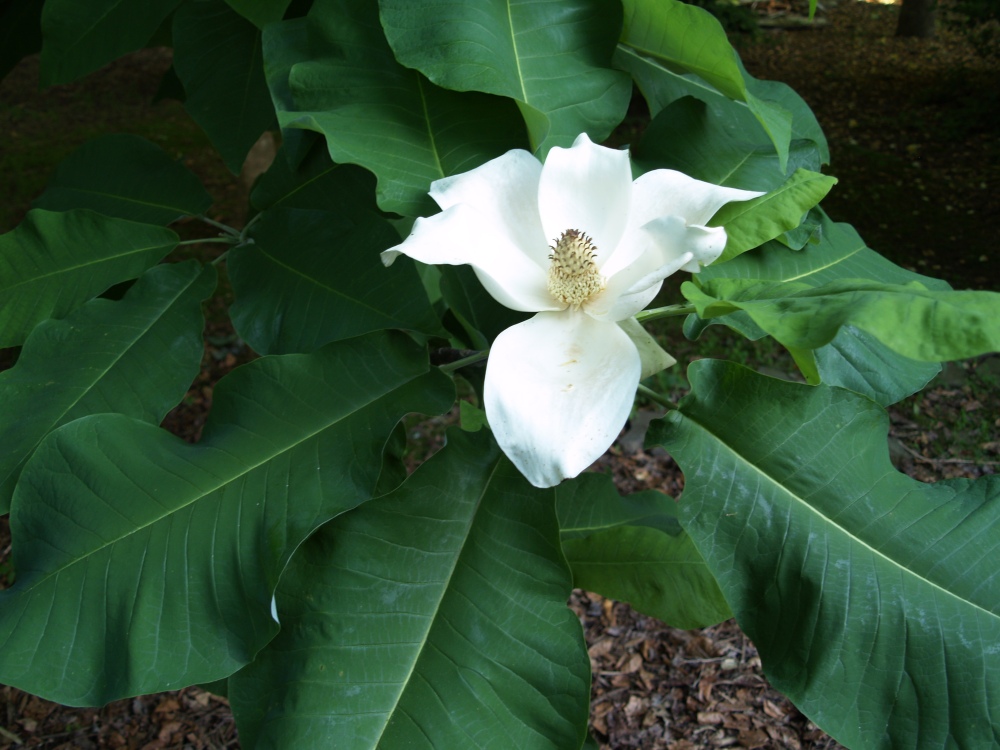 The only magnolia in the garden that is not common is the mid spring flowering Big Leaf magnolia, which is appropriately named with leaves that measure up to two feet from end to end. The flowers of Big Leaf are similar in appearance and fragrance to the evergreen Southern magnolias’, but proportionately larger. This magnolia grows to the size of maples and tulip poplars, so it is not appropriate for many properties. It is a prized tree in this garden, with the only bother being that the huge leaves will blanket anything beneath it when they fall in autumn. 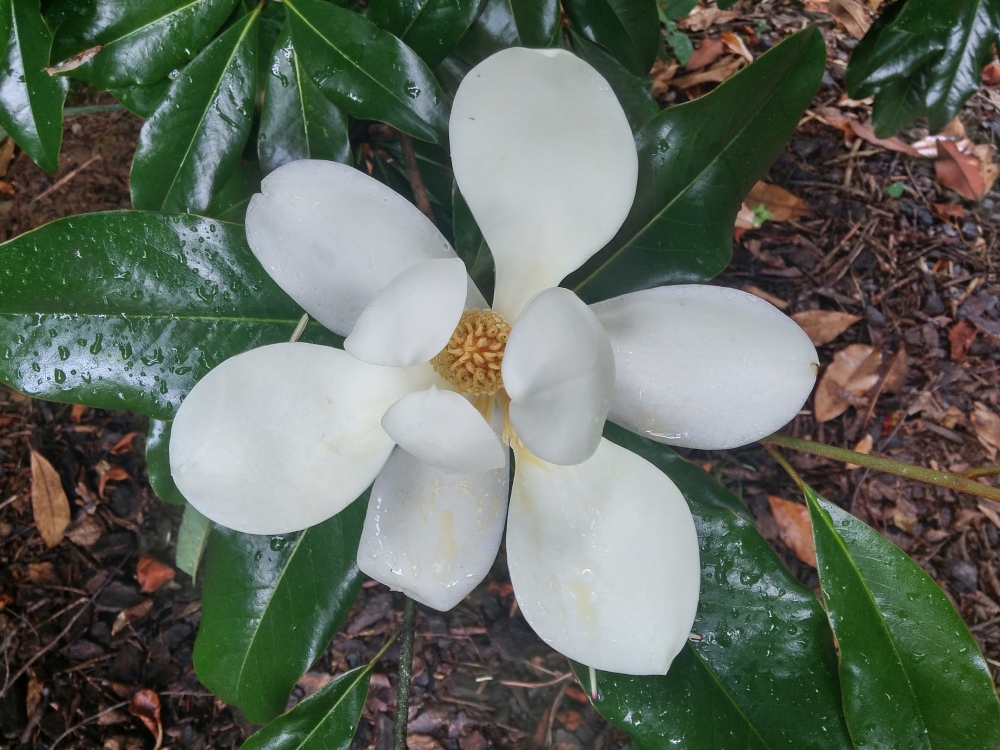 There are two evergreen, Southern magnolias in the garden. ‘Bracken’s Brown Beauty’ is the cold hardiest of the evergreens, though one of two was damaged by cold in consecutive winters. Still, ‘Brackens’ is a sturdy tree with dark leaves and plentiful summer blooms. The second evergreen magnolia is not as common, and supposedly is not dependably cold hardy in this area. However, ‘Greenback’ survived the cold winters without a problem, and it shows minimal damage from an ice storm a few years earlier than caused damage to other magnolias as well.