Over the better part of three decades, a hodgepodge of stone paths has been constructed to wind through the garden. In some instances, paths preceded the planting of the garden, which was then planted after ready access was available. 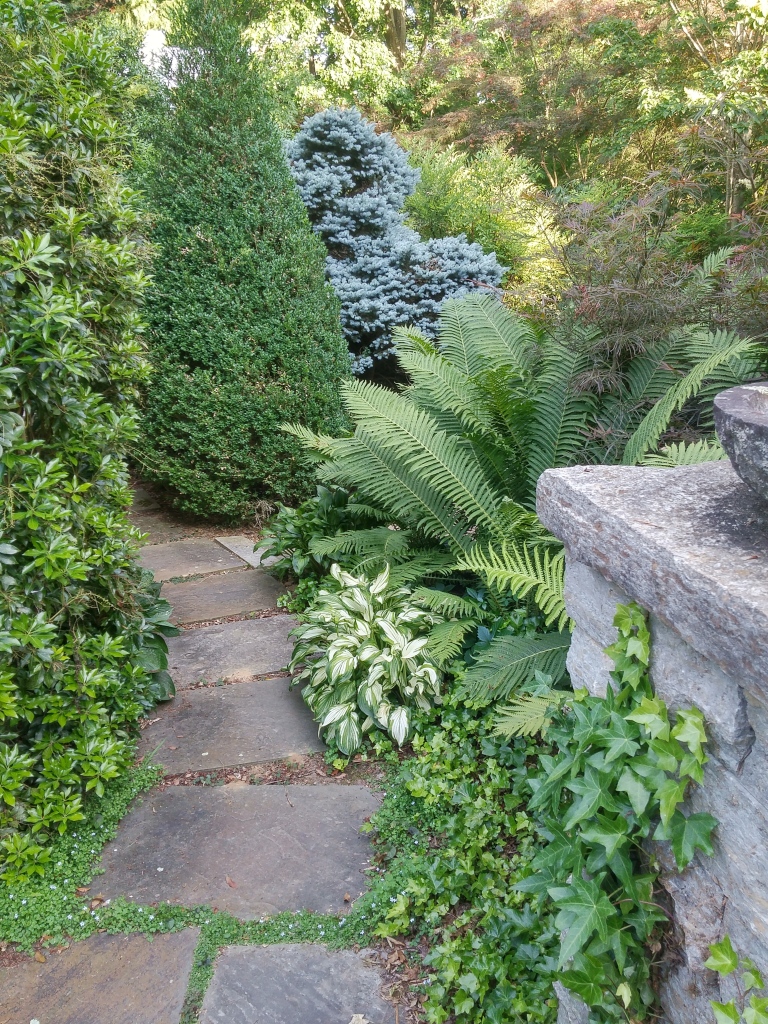 None of the paths is artfully constructed, and even the more formal path to the front door is a combination of pockmarked Pennsylvania bluestones, bricks salvaged from some long forgotten project, and concrete ornaments that are now mostly obscured by moss. The flawed pieces of bluestone were once selected for their greater thickness and weathered appearance, instead of more perfect stones that might outshine the new garden.

While a small patio in the rear garden of thinner, but colorful flagging from India or China (their origin is unclear, but not American) suffers from several cracked stones, the bluestone path shows no more than a few chipped corners, and except for mossy joints, it appears as weathered today as twenty-seven years earlier.

Besides the front walk, no paths adhere to landscape architectural standards that suggest width should accommodate two adults side by side, at least four feet and preferably five feet wide. At most, paths are three feet in width, and this is only a single path of two by three bluestones that leads from the driveway to the rear deck.

Bluestones for this path have fewer imperfections than ones on the front walk (though they are similarly thick), and while functional through most of the year, the heavily shaded path can be treacherous when damp. Stones follow the slightly sloping grade, and fortunately the path is short, with a side exit to a circular patio just before the slope becomes most hazardous. 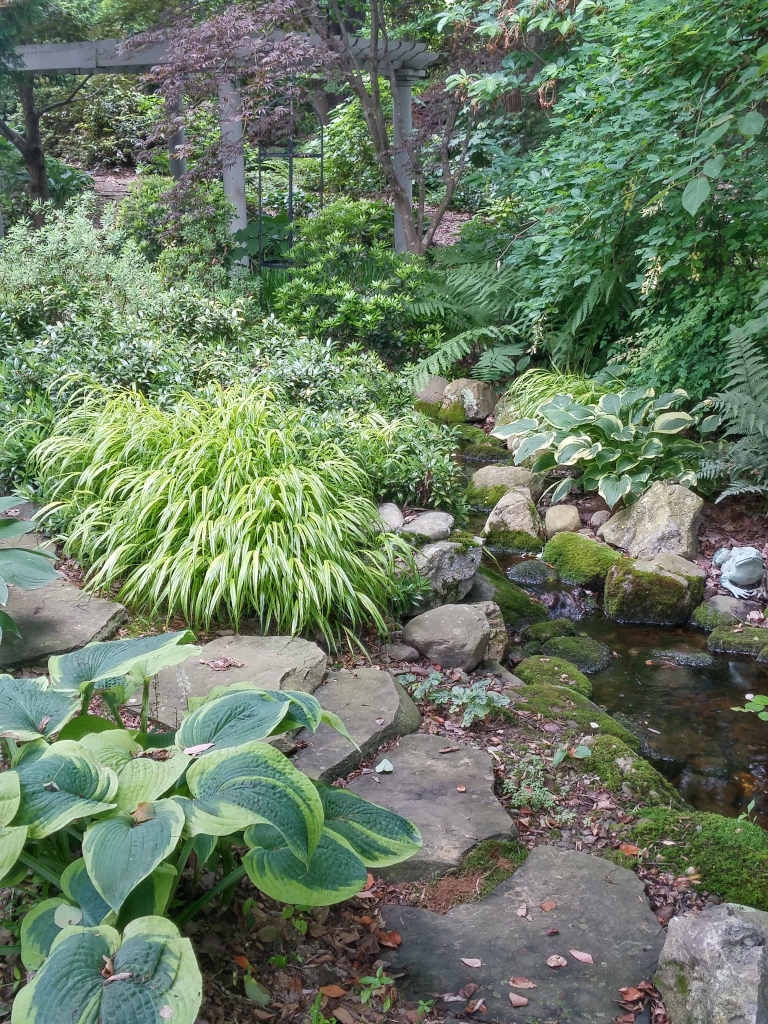 This is a route taken frequently with an armload of something (usually plants) headed into the rear garden, and is the path most often taken by visitors. Just below the round patio is a narrow crossing of a section of the two level pond that sits beneath the rear deck, and then stone steps descend to a lower patio (the colorful one with broken flagging). The steps are remnants of stone brought in from a Canadian source, and I figure that the nearly black, glossy stones are basalt. The five steps are the last of the stock, and with broken edges the stones were purchased for an excellent price, I recall. While the basalt stones do not match any others in color, the broken, but functional steps perfectly suit the look of the garden, where nothing is perfection.

The narrow crossing of the pond is another story, a gap of no more than twelve inches that has caught the foot of many visitors who have not yet learned a critical lesson of this garden. Watch where you step. At one time, a light illuminated this cross over, but with few visitors (and fewer after dark) the light has not been repaired for years after the bulb went out, or the transformer has blown, or whatever the problem is.

Other, more narrow paths, are laid with a single width of irregular (rather than cut) stones, and often are partially covered by arching hostas or yellow leafed Forest grasses. Liriopes and Mondo grasses, and in one spot rhizomatous stems of sweetbox grow between stones. All of this is disturbing to my wife, who prefers clean lines, and in some areas is fearful that a large leafed hosta might hide a large black snake. Certainly, this has happened a time or two, though I exaggerate for her benefit.

A path that winds from the front door, along the far side of the house, to the rear garden, tells the tale of the progression of the garden over decades. Here, are three separate paths, one added to the next with different stones as sections of the garden were added. The exact timing is foggy, but the newest path is now at least a decade old. All display slumping stones with ever expanding joints, and stones that settled and now are covered in silt, and by debris washed over in the latest rain storm. 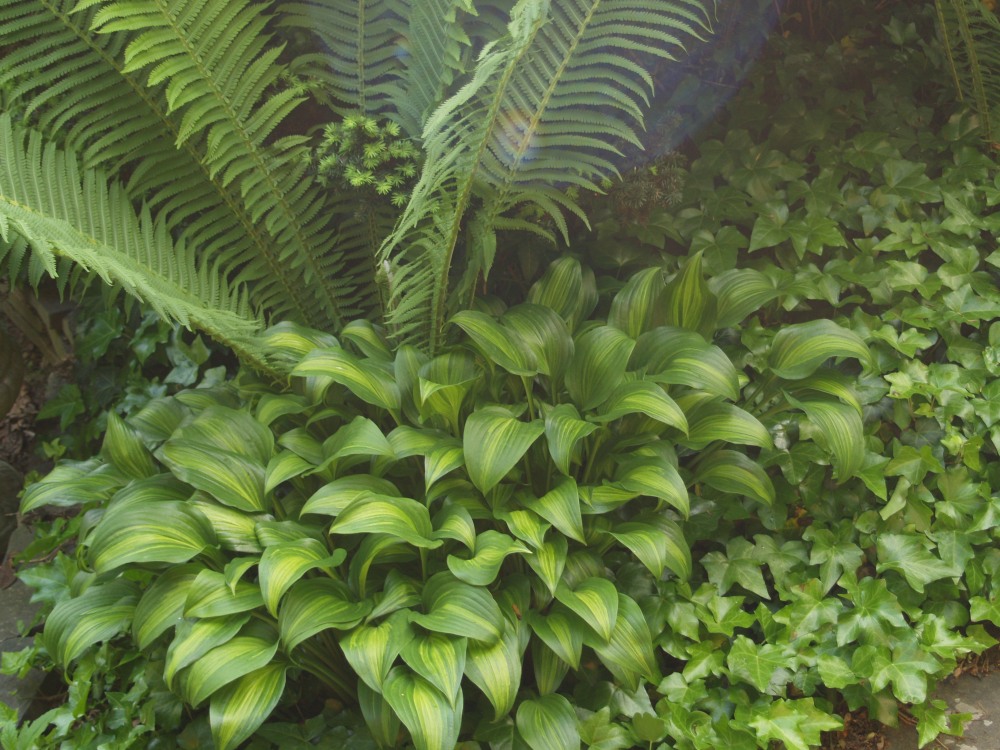 These are paths, not presumed to be walks, with only the requisite that they lead from one area to the next above the slop or mud or decaying leaves. Footing can be (and often is) uneven, and while visitors are forewarned, the stones permit the gardener access while dragging a minimum of debris into the kitchen. This is more trouble than snakes.