A swath of forest borders the southern property line so that tall maples and tulip poplars shade much of the garden through the winter, until the sun takes a more northerly route to bring much of the rear garden into afternoon sunlight by mid spring. The winter shade is not dense, filtered through deciduous trees, but it is enough to delay flowering of magnolias by a week or longer than ones just up the street. I expect that by the time I photograph and report on the flowering of a tree or shrub, it is often old news for gardens in the neighborhood, and most certainly for folks thirty five miles east and closer to the city that is warmer by a full zone. Still, I’m early for North Dakota.

In this garden the earliest magnolia to flower is ‘Dr. Merrill’ (Magnolia × loebneri ‘Merrill’, above), which towers over the shrubby ‘Royal Star’ (M. stellata ‘Royal Star’, below) that is down the gentle slope by thirty feet, and perhaps a bit more shaded tucked beside the garden shed. ‘Dr. Merrill’ is not rare, but uncommon enough that I cannot verify that all flower earlier than ‘Royal Star’, or that in this garden it is a matter of a more shaded exposure.

Flowering can begin as early as late February, or a few weeks later after a colder winter, and annually flowers are threatened by freezes, with blooms of ‘Royal Star’ most vulnerable to damage. Once the magnolias are flowering, the gardener anxiously follows the weather forecast, not that there is thing to be done if freezes are on the way. 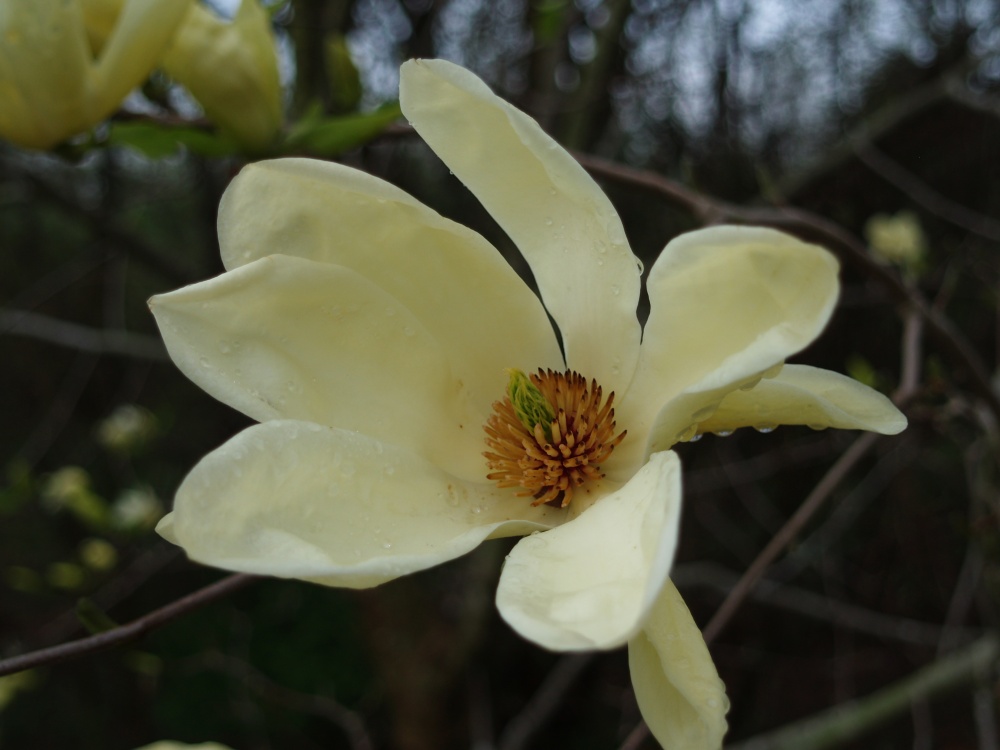 The pale yellow ‘Elizabeth’ (M. ‘Elizabeth’, above) and purple flowered ‘Jane’ (M. ‘Jane’, below) bloom a few weeks later, even with sunnier positions, and at this later date the chances for damaging freezes are lessened. A year ago, ‘Elizabeth’ flowered weeks early in the unusually warm March, and a poorly timed freeze followed that blackened blooms just as they opened and were most vulnerable. After exceptionally warm late February temperatures, buds are swelling that indicate premature flowering might be on the way again. ‘Jane’ suffered minimal injury to flowers, but with a collection of early flowering magnolias, the gardener must figure that there’s a good chance that one or the other will suffer from an ill timed freeze. There’s always next year.