Though the crop of blueberries is not as abundant as years ago when ten large shrubs bordered the shed in full sun, several spindly blueberries grow in the shade between tall blackgum and katsura. A few weeks ago, bunches of blueberries ripened so that I was able to grab  a few handfuls while strolling the lower garden. With the remainder ripening as I traveled, birds have stripped the shrubs bare.

Returning to the garden following two weeks of business travel, I find the catalpa (Catalpa speciosa) has been stripped of leaves, probably by the catalpa worm, though none were in evidence when I examined damaged leaves before I left (below). The defoliation occurs annually, and probably could be avoided by spraying, but I avoid pesticides. Not to worry. Soon, the catalpa will grow another set of leaves, though these will be smaller than the first.

Today, there are only a few scattered Japanese beetles, that for whatever reason are never abundant in the garden, so little damage is done. Perhaps resident birds keep this pest under control. This year, only an indestructible pussy willow (Salix caprea ‘Pendula’) seems effected, and there is no more well suited magnet to attract beetles away from other treasures.

I cannot speak with authority to advocate that every gardener abstain from spraying poisons. The formula to minimize damage is imprecise, and I only suppose that birds attracted to the garden by food, water, and shelter are part of the solution, though this seems reasonable. Certainly, I will argue that spraying poisons will decrease insect populations, both desirable and not, with the consequence that birds, bees, and butterflies will be diminished.

Undoubtedly, part of this equation is the number of plants in the garden, so if the pussy willow is partially defoliated and the catalpa completely, there are many other trees and shrubs to console the gardener. With the number and diversity of plants in this garden, one pest or another is ever present, but rarely is the injury anything to fret over. The coming and going of varied beasts is fascinating to witness, though I can imagine the possibility of a different outlook if the garden was limited to a beetle ravaged purple plum and several lacebug infested azaleas.

Butterfly weed (Asclepias tuberosa, above) and swamp milkweeds (Asclepias incarnata) invite Monarch butterfly larvae into the garden, and while the flowers occasionally attract Tiger swallowtails (below), hordes of aphids are most frequent visitors. Somehow, small beetles find the milkweeds to feast until the aphids are gone, but damage is done and I am pleased when they grow vigorously in the spring.

Today, and for another month or longer, it will be a wonder to see a bee on any flower besides ones on the wide spreading clump of Mountain mint (Pycnanthemum muticum, below). The mint occupies a hundred square feet (at least), and at any time while the sun is shining there will be many dozens of bees, wasps, and hoverflies. Oddly, today I see many bumblebees on the Mountain mint, which are not unusual in the garden, but now are seen in much greater numbers than usual. The bumblebees also seem larger on average. I wonder, are they particularly well fed this summer? 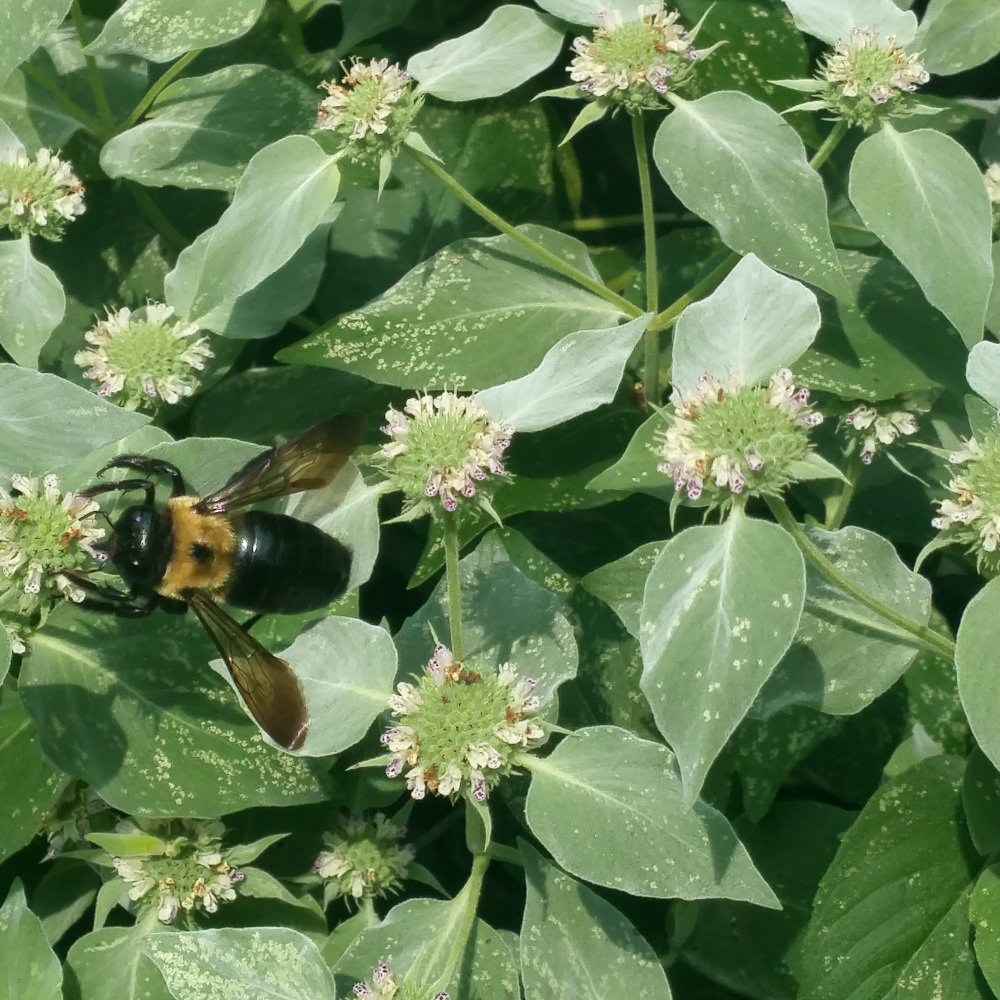