In this frigid, snow dusted garden, large leafed evergreens (aucubas, daphniphyllum, and rhododendron, below) curl for protection as temperatures approach zero. Leaves will return to form once temperatures rise nearer the freezing point, and it is likely that there is no long term harm, though Daphniphylum is only marginally cold hardy for this zone, so time will tell. Several mahonias with undetermined heritage and suspect cold hardiness will be watched, though survival of similarly marginal plants can often not be verified until very late winter.

Emerging flowers of Vernal witch hazels (Hamamelis vernalis, above), evident with mid thirty degree temperatures a week ago, have folded for protection so that color will not be seen until milder weather returns. Blossoms of winter flowering mahonias (Mahonia x media ‘Winter Sun’, below) have curled, though color shows through. 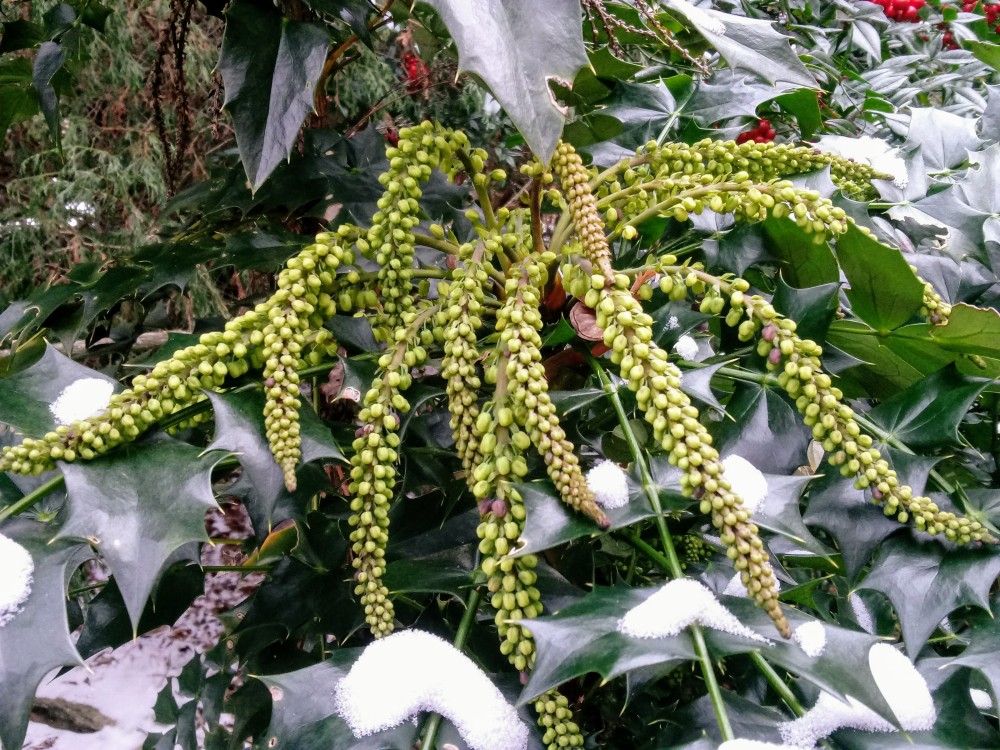 Swelling flower buds of ‘Winter’s Star’ and ‘Winter’s Interlude’, that did not bloom alongside other camellias in recent months, will hold until milder temperatures return. A year ago, the two tardy camellias flowered from January into early March, and though similar weather is not forecast, there are likely to be a scattered few blooms through the winter months.

Damage to flower buds of late winter blooming edgeworthias and winter daphnes is often not immediately apparent, but this recent (and forecast) cold is reason for concern. I expect (and hope) that significant injury does not occur with temperatures a few degrees above zero.

Following a succession of days when temperatures have not risen above freezing, the koi pond is now nearly frozen over except for a small area where water flows in from the recirculating waterfall. There is little danger to the pond’s fish, but I will occasionally monitor the pond’s plumbing, though burst pipes are rare with moving water.

As is typical, bluejays bully for the largest share of sunflower seeds at the feeder, though cardinals manage to snatch a seed or two, and smaller birds scavenge seed that falls to the ground. With seed treated with pepper sauce, squirrels are more infrequent visitors to the feeder than in prior years, though surely chickadees appreciate seed that is sloppily dropped to the ground.