Recent mild winters have spoiled gardeners, now expecting abundant flowers by early March, and in February in gardens that have been planted with assorted late winter bloomers such as witch hazels and hellebores. Mild disappointment is likely when flowers arrive a few weeks later (a more typical schedule), and perhaps the start of this flowering season is a bit behind the average. But, the disappointment is over, spring is here, at least in this garden.

A few days ago, I wrote that double flowered hellebores are later blooming than singles (above), and just as the words were written the doubles began opening. Later than singles, yes, but this year by days rather than weeks. In any case, these are now flowering, with only a few straggling hellebores still to bloom. It is the fuller, double blooms that are most likely to grab the attention of newcomers to the multitude of hellebores available. I’m thrilled with singles or doubles (below), and I favor single flowered, unnamed seedlings as much as any.

I am quite pleased with the increases in small bulbs along the front walk. Snowdrops have quadrupled (I think) in number without planting a single new bulb, and new plantings have increased numbers of Winter aconites and crocus (below) to make what is now an acceptable display. This is a very small area, and certainly not a show to brag about, but the sparse numbers are now less an embarrassment.

A trial through the winter of two marginally cold hardy plants is mostly a success. As expected, a variegated fatsia (Fatsia japonica ‘Spider’s Web’, below) suffered considerable damage when temperatures dropped below zero one night several weeks ago. Fatsia is rated as cold hardy to zero degrees (Fahrenheit), but I suspected this was a stretch. To be sure, several fatsias were protected with leaf filled cages through the winter, and these have survived with varying degrees of damage, but they’ll live. One that was left unprotected (as a test of hardiness) looks to be dead, though I’ll wait to see if it comes back from the roots. It’s possible, but I think unlikely. Now, I’ll know better for next year, and all fatsias will be protected.

The other test was of ‘Pink Frost’ anise shrubs (Illicium floridanum ‘Pink Frost’, below), which were also protected by baskets of leaves. Results for one that was unprotected were much better than the fatsias, and in fact the unprotected shrub looks better than ones coming out of cages, in particular one that was crushed by a sheet of snow that slid off the roof of the front porch. The anise shrub appears to be accurately rated for zone 7 (to zero degrees F.), or perhaps a half zone hardier. Probably, it will not require winter protection in the future.

Several evergreens planted despite being marginally cold hardy have survived for years, even through a winter several years ago with multiple sub zero (Fahrenheit) nights. Following a recent winter when the low was eight above, no injury was apparent, but in every other year there have been brown leaves, though nothing more serious. Spring growth pushes out the damaged foliage, and by mid spring there’s no sign of winter damage. Gordlinia (x Gordlinia grandiflora) was planted as a replacement for a Franklinia that slowly declined, after a suitably sized replacement could not be found. It’s flowers are nearly identical to Franklinia, and its foliage similar except that it is evergreen. Evergreen yes, but annually damaged by any cold (below).

Distylium (below) was planted as a curiosity. This witch hazel (Hamamelis) relative displays small flowers in late winter, which I was anxious to see in each of the first handful of winters after several were planted. But, no flowers, or at least they are so tiny that I cannot see them. Otherwise, it is an unremarkable evergreen, and cold hardy enough to survive several degrees below zero, but with foliage that is damaged below ten degrees. Certainly, not every plant is a roaring success, but spring growth will soon hide the brown. 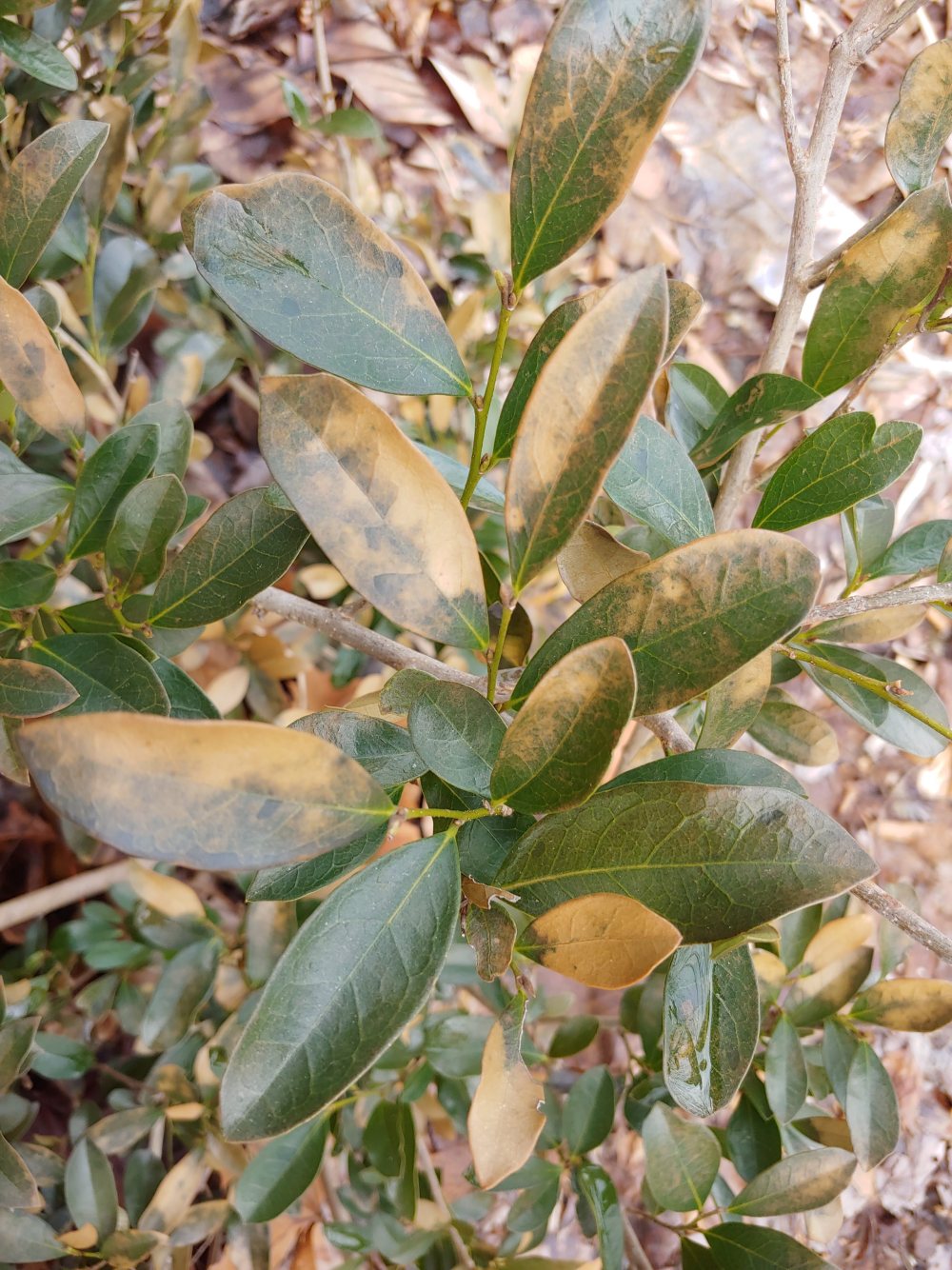